The end of one year and the beginning of the next seems like a good time for finishing projects and starting others, so that’s what I’ve been up to lately. Mostly I was feeling guilty about the baby things I’d started before the little one (who is four months old today!) was born that hadn’t been finished yet.

I started by finishing up the duplicate stitching on the Zodiac sleeper (Ravelry) that the knitting had been finished on for ages: 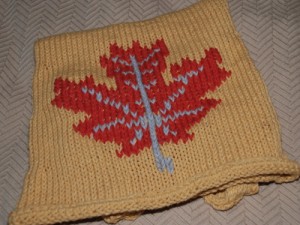 Instead of the zodiac sign the pattern called for, I used a maple leaf motif from Picture Perfect Knits. It’s a good thing, too, since she was born in a different sign than I expected.

Next, on Christmas, I finished up a little pink sweater from Debbie Bliss’ Essential Baby (Ravelry). This one was all knit up before she was born, but I hadn’t done any of the finishing. It turned out super cute, and thankfully blocked out bigger than it look initially, since I knit the newborn size: 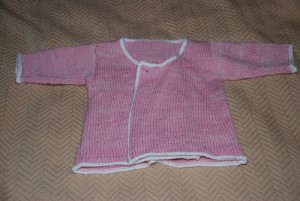 To celebrate getting that done (well, admittedly it still needs a button) I knit a carrot: 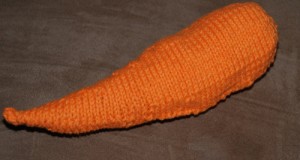 This is from Amigirumi Knits. I plan on knitting the whole bunch of vegetables, and probably some of the other patterns from this one (Ravelry). Clearly it still needs its green tops, which are almost finished (I’m actually on the last one but misplaced the book so I’m not sure how to finish it.

My goal for New Year’s day was to finish one more project; it actually took until the next day: 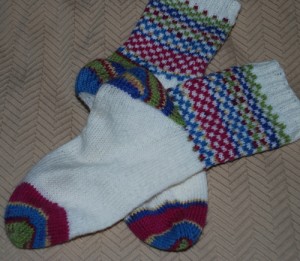 These are my Faux Fair Isle socks, which have been on my website for ages, but it took me this long to finish the last two inches or so of the second foot and the toe. That’s the way it goes some months. I need to get this one up on Ravelry…

As for beginnings, this year I’m doing a crazy thing: trying to knit all the patterns in Elizabeth Zimmerman’s Knitter’s Almanac. I’m doing it as a knitalong, which you can read all about and join in if you like! I’m also thinking about joining the Facebook group devoted to finishing unfinished objects. Except then I might have to admit how many I have!