I don’t have time for a real book club, but I still read some interesting books that I want to tell people about. Thus the recurring series “Book Club of One.”

I have never intentionally brought and “princess” stuff into my house — except for the princess vitamins, because I think it’s funny to say “eat your princesses!” 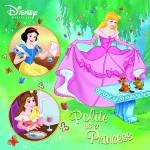 The girl and I crashed toddler storytime at the library a few months ago and, I guess because it was the beginning of summer reading, they had free books for the kids. The book, Polite as a Princess, features the Disney gals (mostly Snow White and Cinderella) showing off their good manners: “Ariel is very good at sharing,” for example, or “Cinderella always covers her mouth when she coughs or sneezes.”

I find it pretty irritating, frankly. The girl loves it. She’d read it multiple times a day if I let her. And though I don’t think she really understands the question, when I get to the end: “A princess is a polite young lady. Don’t you want to be just like a princess?” she’s started answering “yeah.”

The other princess thing we have is a pair of pajama pants we picked up at a swap. The girl had no interest in them until she started reading the book. Now she’ll ask for her princess pants and gets really excited when she gets to wear them.

She doesn’t know a single princess story. She’s never watched a Disney movie of any sort (or any movie, other than “Babies”). She’s heard little snippets of some of the stories thanks to the illustrated Grimm’s Fairy Tales we “read” on occasion. I read some of that book out loud to her when she was too little to get bored and decided I might leave the telling of “The Little Mermaid” to Disney and pretend the original didn’t exist. Both Cinderella and Snow White are referenced in episodes of “Abby’s Flying Fairy School,” one of the girl’s favorite parts of Sesame Street, but in both cases the damsel in distress is played by a boy.

All of which is to say there’s just something about little girls and princesses. My kid doesn’t even know what they are and she’s obsessed. I wont’ way I’m really worried about her turning into a girly girl sitting around waiting for her prince, but it does seem like the pink princess phase girls are encouraged to go through (by everyone from the marketers at Disney to the dentist who gave the girl a princess sticker at her checkup to, sometimes, parents themselves) goes way overboard.

Given all that I was interested in reading Cinderella Ate My Daughter: Dispatches from the Front Lines of the New Girly-Girl Culture by Peggy Orenstein, an exploration of what it means to be a young girl in America today and whether all that pink and rhinestones actually does any harm to our girls.

The answer, as you might suspect, is we don’t know, but it’s probably a harmless phase, so long as girls don’t use the princesses as a focal point for developing body-image and self-esteem issues. After all, most girls don’t pack their magic wands and fairy wings when they go off to college.

The book is still interesting, providing some background on how the whole “princess” thing got started; lamenting the marketing of real-life “princesses” like Lindsay Lohan and Miley Cyrus to kids as young as 6, which ultimately confuses their girl fans when the stars grow up a lot faster than the girls do; and exploring the “failure” of Disney’s first African-American princess.

The section on “Bratz” dolls and the like scared me with the knowledge that I’m going to be having fights with my kid over hoochie dolls before I know it. Orenstein makes a great argument for the hypocrisy of American Girl dolls (really? $100 for a Depression-Era girl? And $20 for her lunchbox?) and peers into the world of high-glitz beauty pageants for girls.

What I wonder after reading this book is whether its just as limiting and destructive for boys to be pushed toward “Cars,” monster trucks and everything blue as it is for girls to love princesses, pink and rhinestone tiaras. I’m sure Orenstein would argue it’s not good to put any kid in a box and all our children should be given a wide range of toys and variety of experiences from which to choose.

But the toys we give boys and the stories we tell them aren’t nearly so stereotypical and limiting of their gender. Boys get to be brave, get dirty, even be bad. Girls get to clean the house, rely on the intervention of magical creatures, wait around (even literally sleeping through their lives) for a man to rescue them, even (poor Little Mermaid!) give up their voices for the hope of getting the man of their dreams. Not a great message at any age.

I don’t think it’s completely possible to keep kids away from the princess/pink stuff. I certainly don’t have the energy. But I also think my spunky, smart girl who also loves trucks will grow up understanding that fairy tales offer little fun for the girls, and that real life — or even making up your own stories! — is a lot more fun.