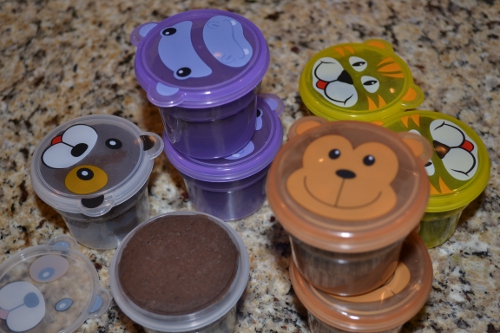 I don’t know why I decided I wanted to make a little something for all the kids at the Bit’s preschool for Valentine’s Day, but I did. (I’m sure I would have though better of it had I realized there were three birthdays — among seven kids — in the next three weeks, not to mention three other birthdays we’re celebrating in the next two weeks.)

Originally I thought I might make all the kids crayon caddies, but half the kids are boys and I didn’t figure they’d be crazy about heart-shaped crayon holders. Plus that would take a whole lot of time I don’t feel like I have right now.

So when I came across a recipe for chocolate playdough when I was nearing the end of this installment of the Great Pinterest Playdough Throwdown, I thought it would be just the quick, easy and fun thing I needed. And it was.

Somewhere, probably around Christmas, I saw someone package playdough for gift giving in little animal-face-shaped containers designed for baby snacks (they’re two for a dollar at both Dollar General and Deals, probably other places, too). I picked up eight in various animal shapes — hippos, bears, tigers and dogs (I think).

I decided to continue the animal theme with the Valentine cards, which we’ll get to in a minute. First, the dough, which is completely simple, comes together quickly and, if you’re a dough maker, probably only calls for one thing you might not have, and it’s optional.

To continue with the animal theme, I wanted to do cards with some kind of animal print. I happened to find zebra-print notecards at Hobby Lobby so I used those as my base. 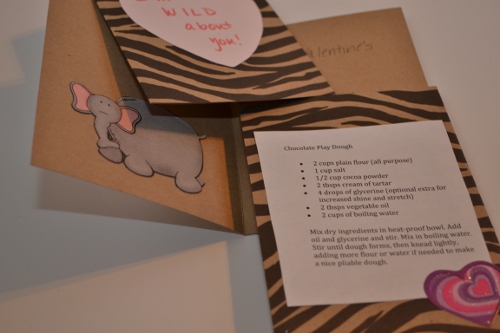 To make them more Valentine’s, I cut hearts out of pin cards stock and glued them to the front. I wrote “I’m WILD about you” inside the heart using a glitter marker.

On the inside, each card got a cardstock sticker in the shape of an animal and the Valentine’s Day message. On the back I attached with double-stick tape the recipe for the dough (in case the parents want to make it again) and added a heart sticker. I haven’t decorated the envelopes yet but they’ll probably get hearts, too. Both the dough and the card will then go in a Valentine-themed kraft paper bag.

These cards came out really cute, if you ask me, and didn’t take much time or materials. I don’t do it often by I find it a lot of fun to make cards, and when they can enhance a theme it’s so much the better.

Are you still crafting for Valentine’s Day? I’d love to know what you’re up to!