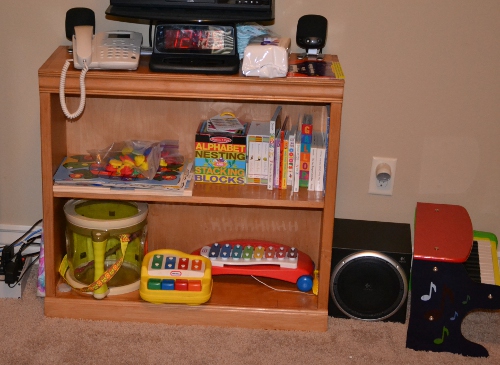 It’s spring cleaning season and the blogosphere is inundated with posts about people trying to get more organized, cleaning out their homes, sharing tips, etc. Just reading about all that work can be overwhelming!

But this week I did get motivated in a small way, thanks to Project Simplify over at Simple Mom. It’s a four-week cleaning project that aims to somehow make the work a little easier with some guidance, support and knowing that other people are doing the same thing you are. The first week covers kids’ stuff, and so far I’ve worked on it two days and have gotten the playroom in pretty good shape.

I think we’re like most families with little kids — at least those with space! — in that we have a lot of kids’ stuff. Clothes, toys, books, art supplies, craft projects … it goes on and on. And since I’ve been crafting more for her, giving her more sensory opportunities and raiding the dollar store for fun stuff to explore, the playroom has lately gotten even more cluttered and crazy than usual.

As you can tell by the picture, the playroom isn’t just for the Bit. It’s dominated by two big couches, which we sometimes use to watch TV or entertain after she’s gone to bed, but mostly which we lounge on while she plays. There’s also an elliptical machine, which is folded up in these pictures because we haven’t been using it as my sweetie recovers from surgery. (My excuse? I’m recovering from his surgery, too!)

On the other wall is where the TV is mounted on the wall. Under that is a bookshelf, with lots of mess and a pile of books, and a bin-based small toy storage system from Target. This is the part of the room that probably annoys me the most because it should be easy to keep it organized, but it just never is.

I am not the sort of person who can take a whole day, tear a room down and fix it. Which is probably why my office is still a wreck a year after moving into this house! (That’ll be my week four, if I don’t get to it before then.) I’m a huge fan of small steps, though, and using the timer to keep yourself on track. It’s almost like a race to see what you can do in the amount of time you’ve set for yourself.

So yesterday I set the timer for 20 minutes and worked on the back half of the room. That meant storing the sensory stuff, moving a little microwave cart so it wouldn’t be so in the way, putting the art supplies on that instead of on the floor (!), picking up and culling stuffed animals and so on. I actually took this picture this morning, but this is what it looked like when I was done:

The microwave cart could still use some work. I’m thinking I need to put some of the actual sensory stuff in the bottom so she can reach it, and put the strainer, bowls and things on the top where they’re not as accessible, but safe for her to get to if she gets on the chair.

My other problem is that the busy box does not need to live on the table, I’m just not sure where to put it.

Today I set my timer for 15 minutes and set as my task the other part of the room. After a quick cleanup of what the Bit played with this morning before school I cleaned up the bookshelf and surrounding environments.

I only removed a few toys and puzzles from this area but the better organization of what’s left makes it look so much better!

The major victory was the bookshelf. I went through the art that was being stored on top and moved the keepers where they go. I moved the clock so it wasn’t in front of a speaker and stashed the diapers behind it. I took out a couple of toys, and added the telephone (which is real, but for playing).

I took the books out of the basket, sorted out a few that were too “baby” or seasonal, and then stood the books up. Shocking. They take up so much less space this way. I put the alphabet stacking blocks next to them, and left a peg toy there that won’t fit in the puzzle bin.

Then the bottom shelf was empty. Shocking again. One thing I’d always hated was there wasn’t a place for things like her big drum and xylophone, so now there is. Huge victory for mama. And a big win for the little girl, too. And it only took 35 minutes.

Tomorrow I tackle her closet. It may take longer than 35 minutes.