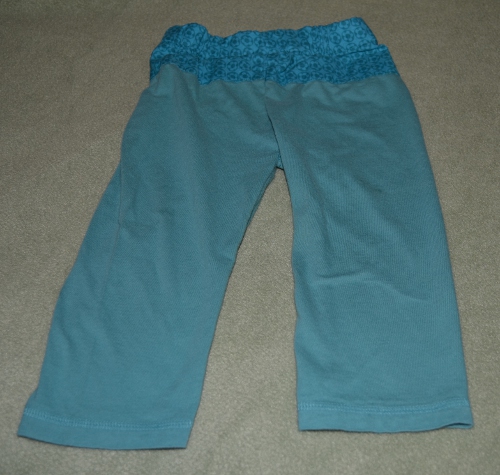 I’ve probably known how to sew almost as long as I’ve known how to knit (and that’s a long time!), but I’ve never felt very comfortable around a sewing machine. I’ve never, for example, installed a zipper. I was going to once, but then I realized I don’t even know how to put the zipper foot on my machine. So there you go.

That doesn’t mean I don’t sew. I just make really simple things. I made the Bit’s crib bumper (it’s just a big pillow with ribbons hanging out) and, more recently, a pillowcase for her little pillow. I made her Halloween costume last year (oh, my goodness, the baby picture on that post makes me grin!) and can do things like lengthen a T-shirt or turn shirt arms into legwarmers.

But major garment sewing I have not done much of. And I really want to. I have tons of things to sew on my Pinterest boards, both for her and for me (not to mention all the sewing books I own) and I’ve decided it’s time to finally take the time to do some sewing.

I started out super simple, with a pair of pajama pants (they could be non-pajama pants, too, frankly) upcycled from an old shirt and with a waistband made from a scrap of fabric. The tutorial is at the Mother Huddle and there was no reason at all for me to take pictures while I worked because I did it exactly the way she says to (well, I did skip a bit of ironing, while we’re being honest, but other than that).

The bottom of my version is from a long-sleeved shirt of mine that was in my office for no reason I can ascertain, but I’d clearly been living without it for a while so I figured I wouldn’t miss it. The top wasn’t strictly a scrap, it was part of a bigger piece of fabric the Bit has been using as a cape (it’s L-shaped, so it fits on her shoulders nicely).

I made these last weekend while the Bit and my sweetie were visiting her Grammie. If you have all your supplies handy they take very little time. I’d love to make some more of them, and maybe also a shorts version since it’s about sleeping in shorts weather around here.

I hope to get back to the machine soon, but in the meantime, who has tips/resources/great easy patterns to recommend to a semi-newbie longtime sewer?