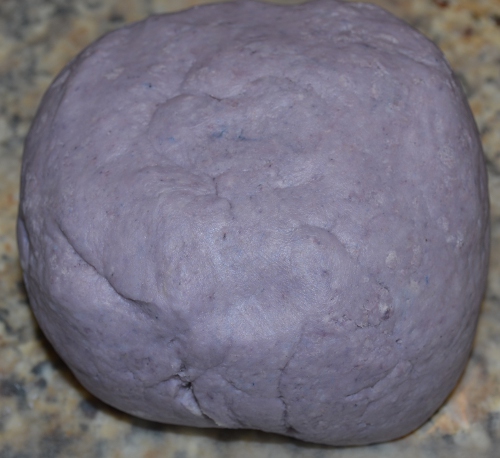 Earlier this year I did an experiment with different playdough recipes I found on Pinterest, trying to find the one that was the ultimate.

The first one, made with Jell-o, I loved, but it got moldy after a couple of months.

The second one had Kool-Aid, and I liked that one pretty well, but the consistency was a little rubbery, and we left most of it out overnight and it got dried out.

The third was a no-cook version and I pretty much hated everything about it.

So today I decided, since we’re running low on playdough again, that I would try that recipe with Kool-Aid instead of the cocoa powder and see if I could make the best playdough ever, at least in my mind.

I didn’t take pictures of the process because by now I bet you all know how to make playdough.

We haven’t gotten a chance to play with this yet because I just made it today, but when I went downstairs a couple of hours after making it, I found a strange thing.

The dough was really dry on top and the bottom of (and underneath) the waxed paper was wet. Like someone had poured water around. Now, I don’t think I poured water around, and I’m the only one in the house, so I don’t know if this dough started excreting water immediately upon cooling or what. But it’s something you might want to keep an eye on should you try this recipe. I kneaded it back into shape and put it right into a zip bag, so we’ll see.

The other thing I want to say off the bat about this recipe is that it’s huge. I just used the same amounts as the chocolate dough, but if I’d given it any thought I would have realized that’s more dough than any one child needs of a single color. If I were you and making this for a single small person, I’d halve the recipe and use a single packet of Kool-Aid. I think that would help both the quantity and the color.

This post is linked to Link & Learn at No Time for Flash Cards, Kids Get Crafty at Creative with Kids and Get Your Craft on at Today’s Creative Blog. Visit them for lots more crafty ideas!