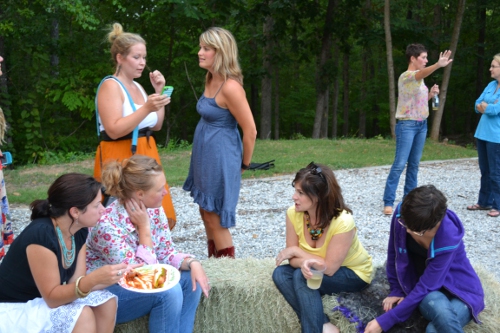 I spent the weekend at the Arkansas Women Bloggers Unplugged Conference, which brought together 70 women from all over the states (and one each from Missouri, Oklahoma and Kansas) to learn, connect and have fun. We certainly did all of that and more. It was a crazy busy whirlwind of activity that was at times overwhelming, at times awesome, and occasionally both at once.

I was on the fence about going for a long time but I’m really glad that I did. Despite being freakishly shy and marveling on more than one occasion about how easy everyone else made small talk look, I’m really glad I went and I hope I made some relationships that will turn not just into connections with other bloggers but friendships as well.

There’s so much to talk about and I”m sure I haven’t fully processed it yet, but I know that it was valuable for a lot of reasons. If you’re a blogger and you have a chance to go to a regional or state conference, or even just to make connections with other bloggers near you, I hope you will take the time to do so.

Meeting other people who do this — let’s face it — kind of strange thing that we do makes it feel less strange. It makes it feel important. And good. And worthwhile.

I Want to Tell You a Story…

This is a story I probably shouldn’t be telling because I have no pictures to go with it. I was just too into the moment at the time, I guess. It’s one of those moments where you decide to really experience it instead of experiencing taking pictures of it.

Anyway, I want to tell you about Miss Mary. She goes by the title of park interpreter, which is just a fancy way of saying she tells stories for a living.

She’s been at the park (which is the Ozark Folk Center in Mountain View, Ark.) longer than I’ve been alive, and she’s so good at what she does it’s chilling.

She started out dressed in what you might think of as a traditional pioneer woman costume: a voluminous green muslin dress cinched with an apron, long sliver-gray hair in a bun.

She told a story in old-time vernacular about three women who used storytelling — particularly songs — to make their lives feel less difficult and as an outlet that sometimes gained them respect in their communities. She purposefully rambled and got sidetracked as you’d expect and old woman to do. She went from standing to sitting, talking to singing and had what started out as a group of chatty, noisy bloggers completely riveted by the end.

But the story of these women wasn’t the only story she had to share. She also had a fish story, one of the rare true fish stories (or was it?), about the time she caught what had to be one of the biggest trout ever caught at Mirror Lake (if they kept records of such things).

As she started to tell her own story, which opened with a friend who never went fishing with her husband but decided to take up the hobby after he died, she began to change personas as well.

She started speaking in modern-day language and as she talked, she took off her old-timey clothes to reveal jeans and a T-shirt underneath. She added a fishing vest, lure earrings and a baseball cap as she shared that she — who only liked fishing because she got to steer the boat– now fishes weekly with her friend.

But one day when she was alone she caught a really big fish — two pounds, five ounces and more than 17 inches long, if I remember it right.

“It took us three meals to eat,” she said proudly.

The storytelling was awesome and captivated the room. So inspiring.

Of course what we all do is tell stores. As bloggers, as women, as people. And this story is running long but if you’ve stuck with me this long what I really learned this weekend was that our stories matter.

Our lives are important.

There are people who want to hear our stories, even if just to get the feeling that someone else has been through that, too, and survived.

So keep telling stories. There is value in it.

And that’s more important than the latest magic formula (Lela’s right, there isn’t one), SEO trick (nothing works for long, anyway) or fabulous plugin, widget or app.

After the storytelling, Mary sang a few songs, one of which was this one (she sang it with slightly different words, but the idea is the same), which she did as a call and response with the crowd. It’s pretty much what this whole weekend was about.