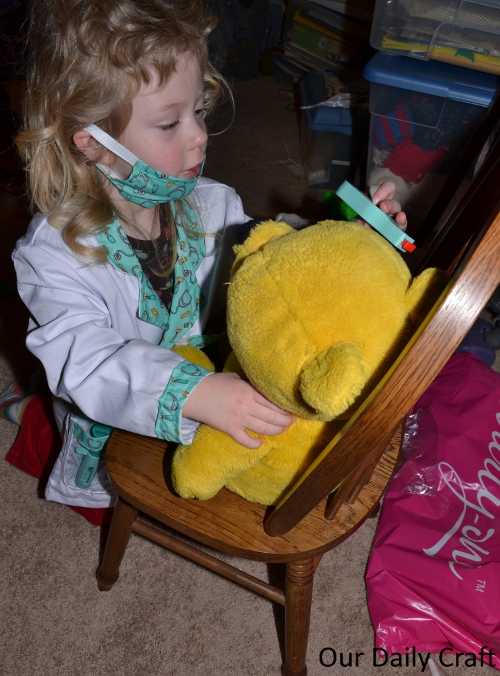 The Bit, like most kids, loves to dress up and play pretend. And she really loves pretending that she’s a doctor and someone — a parent, a doll from the dollhouse, a stuffed animal — is sick. She will use anything at hand to be her medical equipment. For a long time her “medicine” was a travel-sized bottle of shampoo.

So I knew that for Christmas I wanted to get her some doctor stuff. I thought about buying a toy doctor bag with tools and making her a coat, but around Thanksgiving Amazon had a sale on Melissa & Doug stuff so I bought their doctor role play kit.

It has a little coat and matching mask, along with a toy stethoscope (batteries not included) that makes heart noises and coughs, a thermometer, reflex hammer, scope and syringe.

But for some reason that was one of the presents that didn’t get opened on Christmas (maybe because it was in a giant lavender gift bag instead of something Christmasy?) and it had actually been sitting, still in its bag, in the playroom until last weekend.

Husband was out running errands and the Bit started in on her someone is sick game again, so I figured it would be the perfect time to introduce some new tools.

She put on the jacket and used all the tools on the doll that was sick, and on me, and on some other friends.

I set up a clinic in my office, with her little wooden chairs that were supposed to just be the waiting room but she did her exams there, too.

I think we must have played for an hour, and it’s been a popular choice since then, too. She’s added a toy cell phone to the mix, and I know we’re going to personalize her badge (maybe with one of the pictures I took of her playing).

Of course a big part of little kid doctor play is using bandages, and none were included in her role play kit. I don’t really want to use real Band-aids for this purpose, because we waste enough of them on her “boo-boos.”

So since we were in my office anyway, I grabbed some felt and made a few of my own.

I didn’t measure a real Band-Aid when I made them, I just eyeballed a rectangular shape and curved the corners. I glued a little square of brown felt in the middle. Use whatever color of felt you have — I used green, black, blue and pink (so far).

Felt alone will hold relatively well on fuzzy animals, but the Bit didn’t think that was good enough, so I put some peel and stick Velcro on one of them to make it extra sticky. We’ll see how that works and if it isn’t too sticky I’ll add it to the rest.

Does your kid have any fun role playing toys/costumes? I’d love to hear what you use.