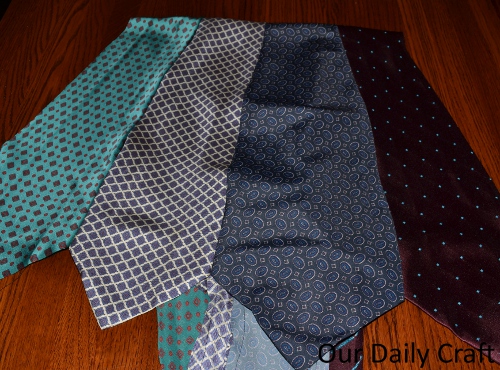 When I sign up for creative challenges — which is what this year is all about for me — I have the best of intentions. But I’m pretty busy with my day-to-day stuff, and I’m rather a procrastinator, even sometimes on things I enjoy, so I don’t always do the best job with follow through.

(Which is why I got as far as cutting out strips for a sewing challenge in January, and have watched one video from a bag sewing class I signed up for but have done no actual sewing on that project. But I’ll get there. Someday.)

It doesn’t help that this week’s Iron Craft Challenge wasn’t particularly inspiring to me. The idea was to create something inspired by a television show or movie in honor of awards show season.

Of course I immediately thought of Downton Abbey (Kat went there, too, for her adorable hat!) but I’ve already knit a hat inspired by that show (it’s around here somewhere…if I can find it and finish it I’ll show it to you) so I wanted to do something else.

But we don’t watch a lot of TV, and even fewer movies. I started to run through the list: The Walking Dead? Game of Thrones? Those might be fun (zombie cross stitch?) but I wasn’t coming up with anything that really excited me.

Then I hit upon Mad Men and had the idea to do something with ties.

Unfortunately at this point its still an idea.

Sidebar: Buying Ties in a Snowstorm

The actual buying of the ties was a pretty funny story. I did it last Wednesday, when some winter weather was rolling in. I headed to Goodwill after my epic Target run and quickly picked up a dozen ties. 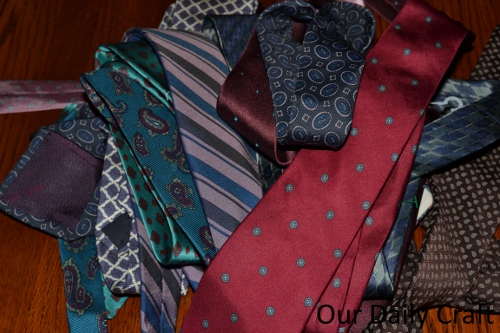 The checker said “Can I ask what you’re going to do with them?”

He laughed. “You think you’re making a skirt?”

Clearly this guy doesn’t get a lot of crafters. “I’m not sure I have enough material,” I said.

He then got all shocked because I said I didn’t need a bag, and left me with a shake of the head and a “I hope that skirt turns out real nice for you.”

I did find the exchange a little extra funny because it was happening during a snowstorm. Only a crafter goes to Goodwill in the snow to buy a dozen ties.

Unfortunately after buying my supplies in advance I didn’t really start working on this project until last night. And ripping the seams out of ties is a lot more tedious than I imagined. 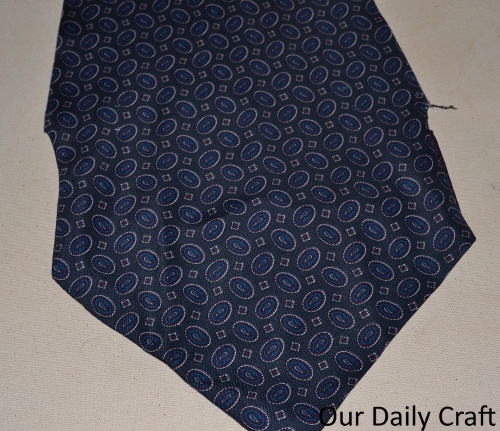 If you want to do this, settle down with some television or movie of your choice and a seam ripper. Some ties are very loosely stitched together at the back, while others are more secure. But there’s a lot of fabric hiding back there so it’s worth taking the time.

Once you’ve got your ties ripped, give them a quick press. I used the silk setting on my iron because I know at least one of the ties actually was silk and I certainly didn’t have anything more delicate than that.

Then just sew your ties, right sides together, in whatever order you like. I aligned mine so all the wide ends are together but you can alternate if you like. Then use the fabric like fabric.

This is what I have so far. I like it. If I were going to make a skirt, I’d have to line it. I’m thinking this would be a fun pillow for my office instead. I’m going to look at it for a few days and come back to it when I have a little more time to think about it.

What would you do with fabric made out of ties? I’d love to hear your thoughts.