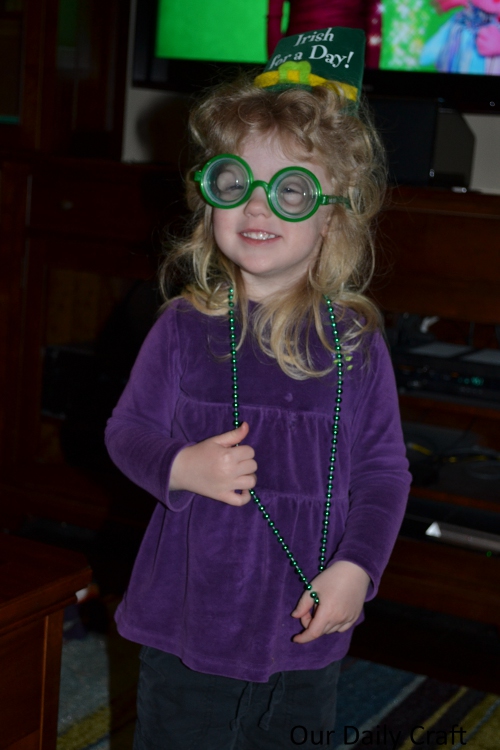 Husband is out of town this week, so I’ve been trying to have something special set up for the Bit after school each day to get out of our routine a little bit and make it special instead of sad.

The Seuss stuff was one of these. And the next day I tried a playdough invitation on the theme of green.

We made some glittery green playdough a long time ago (July 4, to be precise) and its still hanging on, though its showing its age a bit.

We also have a bunch of green stuff I used in a sensory box last year, so I thought I could combine the two into something new she might be interested in. 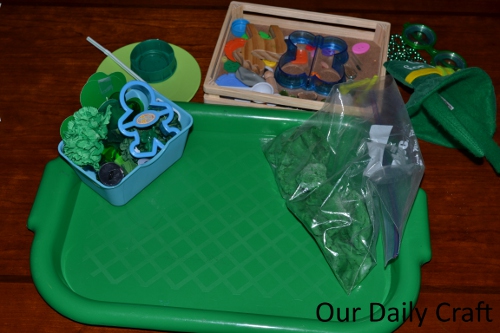 I started by gathering a bunch of little green things, such as

Then I added some of the St. Patrick’s Day stuff:

Since the idea was to use the stuff with playdough I added some googly eyes, a gingerbread person cookie cutter and her regular playdough tools. I added some St. Pat’s dress up stuff — a funny hat and glasses and some green Mardi Gras beads.

Though her reaction to all that was, “oooh!,” I think that I went a little crazy with the green stuff and should have been a little more focused to get her to play more. But I’ll leave it out for a few days and see what she comes back to.

The thing she liked best was a tube of green glass beads I’ve had forever and decided could be donated to the cause of kid craft.

She’d never seen them before and she liked opening and closing the container and enjoyed the beads as well.

She made a “pancake” and decorated it with bead sprinkles.

Then she counted the sprinkles. She got 17 and I got 14, but at least she was trying!

Then she made me eat the pancake, diligently put all the sprinkles away, then wanted to read a book while watching Dora.

Later on — during Sesame Street — she discovered the dress up things. She put on the hat and I asked to take her picture but she wanted to add the other stuff first.

She kept it on exactly long enough for me to take this picture. But it was still pretty darn cute. She really likes the hat, though, and has put it on several times.

So you have seasonal playthings for your kids? I’d love to hear about them.