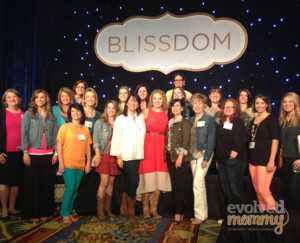 “Awesome” seemed to be the adjective of choice at BlissDom, the giant blogging conference that happened last weekend in Dallas. There were reasons for that. Scott Stratten, the morning keynote on the first day of the conference, has a book called The Book of Business Awesome, which was given to all attendees. (Note: The FTC would like you to know that none of these are affiliate links. Amazon hates Arkansas.)

Another speaker, Jon Acuff, titled his session “The Three Stages of Every Awesome Idea.” There were awesome speakers, awesome music, awesome connections, awesome amounts of swag (I’m still pretty uncomfortable about that last one).

And awesome lessons. I know there were more than 10, but I’m going to limit myself to that for now so this post doesn’t drag on and on. We need to get back to crafting!

1. Marketing is everything you do. (Scott Stratten) It’s not about a logo or a press release; it’s every interaction you have with any person — online or in person. So be awesome all the time (easy, right?). Also, don’t use QR codes or a kitten will die (his rant on misuse of QR codes was a high point; this video is not from BlissDom but he’s been saying the same thing for years).

2. Your mind needs space for ideas to form. (Jon Acuff, though it was common theme that you need to disconnect to really be creative) And when you unplug you need to really unplug. Don’t convince yourself you read business books for fun. Give yourself a little budget for play, and leave green space in your mind.

3. Create in the morning, before checking in with social media. (Megan Jordan) Even if you don’t engage in social media, scrolling though creates “open loops” in your mind that distract you. And, of course, keep email and social media closed while you’re writing. I’m trying this today — it’s 10 a.m. as I write this and I haven’t checked email or Facebook yet! — and it’s hard, but I can definitely see her point.

4. Dave Grohl is awesome. So were my roomies. I ended up staying with three other ladies from Arkansas, and it was so much fun. One of my absolute favorite parts of the conference was watching Dave Grohl’s keynote from SXSW on Jasmine’s laptop. From him I learned that if you have a dream you really can do it all yourself — writing, publishing, marketing, whatever — and that the artist always needs to come first.

5. ’80s music still rocks. After the “girl’s night out” party at a nightclub, an over-the-top ’80s cover band, the Spazmatics, played. It’s not overstating it to call them awesome. They were dressed up like geeks (with nametags and everything), opened with “Take on Me,” and it just went on from there. I have not danced so hard and so long in a really long time. I wished I could have stayed out later, but it was still a ton of fun.

6. Just because I need to be alone does not mean I failed BlissDom. (Susan Cain) At the risk of embedding too many videos into this post, have y’all seen Susan Cain’s TED talk? Amazing. Her research is about introverts and the power we have and the acceptance we need in society. Her talk at BlissDom made me feel so much better about being there among so many other women and still sometimes sitting alone because I just needed that. (Even still I ended up crying a lot the last day because I had just had too much of people.) I can’t wait to read her book, Quiet.

7. Know what success means to you and do everything you can to work toward it. (Jeff Goins) Your idea of success may not be fame or money — though it’s fine if it is — you may want to create something lasting, help people, whatever. If you know what great work is to you, you can focus on doing more of it. This talk really made me think about my approach to writing and being more thoughtful in my work.

8. Know thyself. (Bianca Olthoff) I don’t even know what to say about Bianca’s session, which was all about the power of storytelling and discovering the elements of your own story that are hard to talk about and finding a way to share them so that others feel comfortable doing the same. I don’t even have any really huge negatives in my story — not like the people who shared stories of children who have died, sexual abuse and other really major difficulties — but I still found the session difficult. I think everyone was in tears by the end. I don’t know yet how this session will change me, but I’m pretty sure it did.

9. Start now. (Jon Acuff, again) I actually saw Jon Acuff twice this weekend, because he was the closing keynote, too. He talked about the path to mastery and the fact that even though it’s long and hard, it’s shorter than it’s ever been, and there’s no reason not to start being awesome right now. So that’s what I’m doing. (I started reading his new book, Start, last night and it’s pretty darn motivating. We got advance copies.)

10. Home is awesome. I did enjoy my time at BlissDom, but I was beyond ready to get home. My little girl was sick (and my husband was getting sick), I was spent and I really needed that five and a half hour drive alone to feel normal again. I’m glad I went. It was a good experience to share with so many of my Arkansas girls. But I don’t know if I’ll do it again soon.