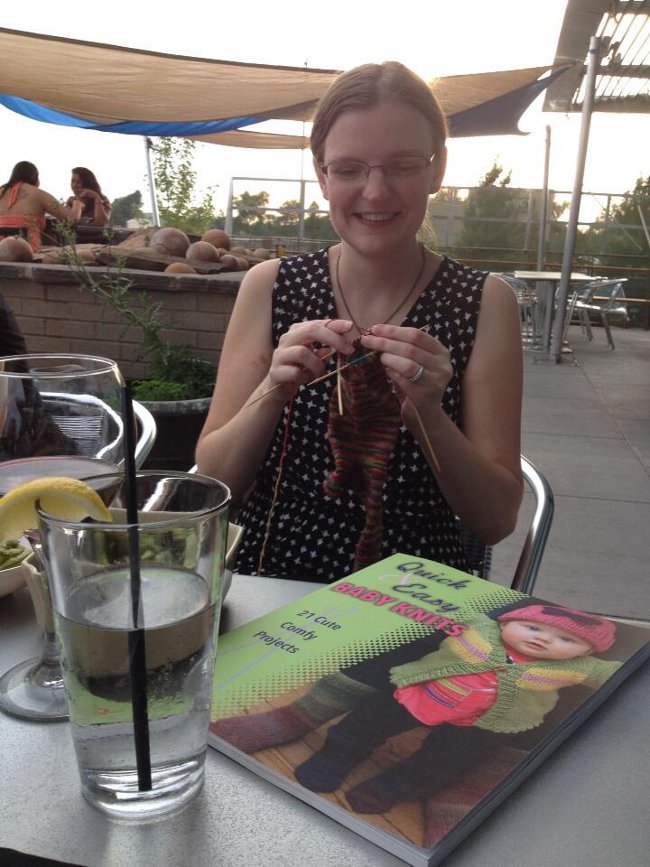 As you all must be aware by now, I have a book that just came out.

Now, I am a relatively rational person. I understand that publishing a book is a big deal. Someone who has never even met me in person liked my online presence enough to ask me to submit a proposal, worked on the publisher’s end to get it accepted, shepherded me and the book through the process, worked to get craft stores interested, and now it’s a real thing out there in the world that people I haven’t even met are reading and, at least theoretically, knitting from.

But I also spend most of my time alone, in the upstairs office in my house, not talking to people. There’s always more work, and not a lot of time for laurel-resting.

I like working by myself, but sometimes I lose perspective.

I forget that I have a really awesome job.

I forget that writing a book and having it published is a super big deal.

I forget that other people will find that stuff — which is just normal life to me — interesting and exciting. That people are proud of me. That people might actually read and like the book.

Luckily, I have people who can help me with that sort of thing.

Earlier this week a local blogging group had its monthly meetup. It was a lovely night and we got to take over the patio at a local restaurant, which is magical itself for late July in Arkansas.

I declared it my fake book launch party, because it’s just been beyond me to plan anything and when I think about it all those issues of authenticity and “what if no one shows up/buys a book?” come up and then I have to go lie down.

So I took a couple of copies with me to show off.

And it was wonderful.

My friend Jacqueline announced my victory to the group and they applauded me. Actually, I got three ovations that night.

I know this is all ego, and I shouldn’t need that to feel good about myself and my book, but damnit, it felt good.

I told her I should have recorded it so I could listen to it in down moments and never again have that problem of comparing myself to others.

What I am, and what I have done, are already pretty awesome.

So I’m writing that down, so I can remember.

I am enough. I do enough. And it doesn’t matter if it seems like other people are doing more or getting better or have fancier lives. Facebook is a liar anyway, and all that matters is that I keep striving and doing the best I can and celebrating those successes, because they should feel like successes.

Because they are. Yours are, too.

Maybe you’ll never write a book. Maybe you don’t even want to.

I told a friend of a friend “I could never do that” when she told me she had four kids, and she basically said, well, I could never write a book. Not just because she has four kids, but because her life is on a different path from mine.

That’s a really powerful lesson about comparing and acknowledging what we have, I think.

My life is not set up for traveling to every fiber festival in America. I am not real life friends with basically anyone in the fiber industry. I live in Arkansas, which is still far away from everywhere important, connected and scattered though we all are.

My books will probably never sell as well as those big-name people’s books do. But that doesn’t make my book any less important (such as a book about knitting can even be important) or any less of an accomplishment.

The other night, people cheered my accomplishment. Strangers praised my book when there was no need for them to even come up to me and say hello. That was pretty awesome.

I’m writing it down so I can remember.

What accomplishment can I cheer you for today?