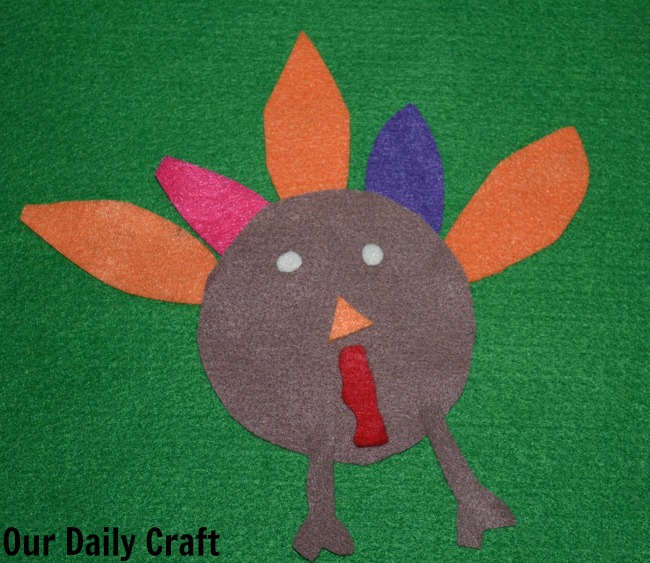 I decided to cut them out in the playroom while the girl was watching TV. (To make them, I literally traced leaves we found on our leaf hunt before we painted leaves.) She thought they looked like fun and asked if she could use some in a collage.

“Sure,” I said, because I don’t want to deny her creativity when it’s not destructive, and I don’t really want to set up certain supplies being “mine.”

I slipped away to do something on the computer and when I came back she had taken all the leaves and done this.

“I made a leaf pile,” she said proudly.

I made more leaves for my project and all was well.

Last night I was cruising Pinterest as I often do when waiting for the girl to fall asleep, and I saw a pin about a felt turkey for the felt board. I didn’t pin it because I got up and made it a few minutes later.

Basically all you do is cut out a circle in brown felt for the body, make little eyes (the one I saw had googly eyes glued onto the felt; I just used white circles, which are admittedly a little creepy), an orange felt triangle for the nose and a random red shape for the red hanging down part of a turkey.

Then cut out feather shapes in various colors. I did a lot more than she used so far, but I wanted to share the turkey she made. No in-progress photos because she demanded turkey feet, which I was cutting out while she was constructing the rest.

I actually made supplies enough for three turkeys, and I imagine this is one we’ll get back to before the long weekend is over.

I hope you have a happy Thanksgiving, or at least a really good Thursday, wherever you are!