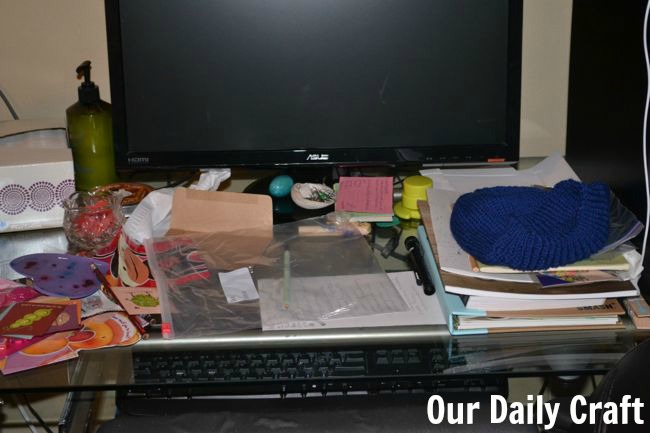 It’s just about the end of January and I have to say, just about nothing has gone according to plan so far. Between snow, sick and family emergencies with our preschool provider, it feels like the girl has been home more days that she’s been in school this month. (That may actually be true; I’m kind of afraid to look.)

So my focus of “grow more organized” hasn’t really spread beyond the basic task I started the month with, which was clearing off my desk every afternoon before I stopped working.

It was easy for a long time because I wasn’t working that much, but when I organized my knitting needle stash it covered the desk and a few things are still sitting there. And with the girl home, she’s been using (and leaving stuff on) my desk, so it needs a good going over. But at least now I notice and want to do something about it when it’s not cleared off, when before I’d just let it pile up.

And I’ve made a little progress on other parts of the office, and keeping the tables clearer downstairs, but I had grand plans for the month that haven’t come to pass.

(That’s usually the way it works, but I feel pretty justified in my lack of progress this month.)

I have done really good at some things that I never announced I wanted to do, or never really even thought about wanting to do, I just started doing them.

As long as I don’t mess it up tomorrow I will have done morning pages for a month straight and will have posted daily on two of my websites for a month. (That second one I’m not going to keep going, which I’ll talk more about tomorrow.)

Maybe the key for me is not to think about things as resolutions, but just as things that I’m doing now. Setting an intention is one thing; doing it is another. So maybe if I say “I’m doing X” instead of “I’m trying to do X” or “I want to do X” that will work better for me.

So next month? I’m doing a bunch of things I’ve been putting off for a long time.