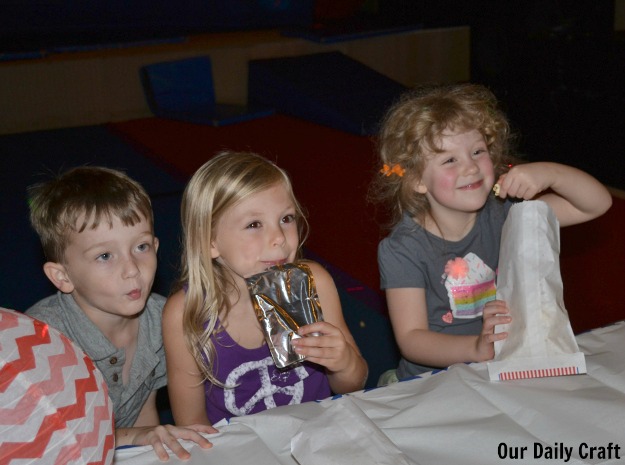 PartyPail.com allowed me to pick out some great stuff for the girl’s birthday party in exchange for writing a post. All opinions are my own (and the girl’s, mostly).

For about six months the girl knew exactly what she wanted for her fifth birthday: a party at Gynmastics Joe’s, a local gymnastics studio that’s open for play (they have trampolines in the floor, a foam pit and a bounce house) during the day and parties on weekends.

And for the third year running she wanted a rainbow theme. Which is great because I can just take the picture of the cake from last year and say “do that again.” But this time with sprinkles.

But decorating a big, plain space for a birthday party — especially when you don’t quite know what you’re getting because you’ve never been to a party there — is not all that easy. And, frankly, I didn’t have a lot of energy for it, with her birthday coming as it did a week after my book deadline.

So I was thrilled when PartyPail.com contacted me and offered to help out. It’s a great website for shopping for different themes, whether you’re looking for the perfect baby shower table gear or just the right shade of solid for a graduation party. They have more all sorts of themes, from Frozen and Sesame Street to flowers, owls, monkeys and Teenage Mutant Ninja Turtles.

A lot of the themes include not only plates, napkins and cups but also decorations, invitations, sometimes even party favors. The prices are great, and it’s way less overwhelming (and faster) to look here for just the thing you want instead of wandering the aisles of the party store and maybe finding what you need.

I asked what they had for a rainbow party and was directed to the rainbow chevron section of the site. 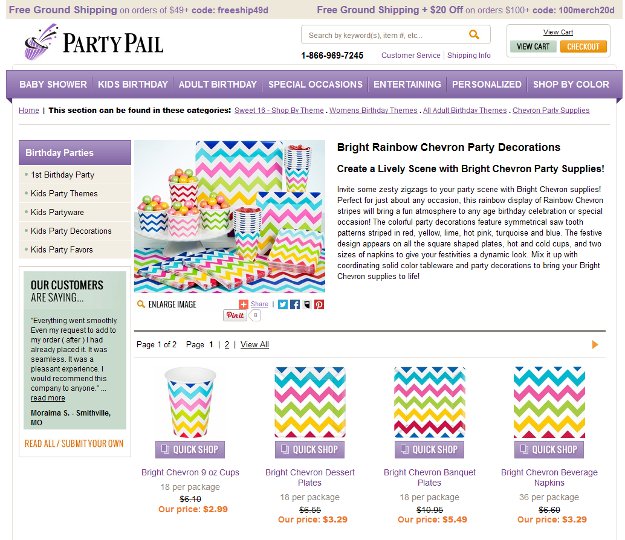 The girl approved and quickly helped me pick out the basics: rainbow plates, napkins and table cloth, along with pink forks and red and pink chevron paper lanterns just for fun.

Shipping was quick, everything looked perfect, and I had one less thing to think about in the midst of a deadline. Hooray.

I didn’t know exactly what our setup would be, but I knew the room was big (it used to be a movie theater) and I knew we’d probably want a little more color than my stash of supplies would bring. 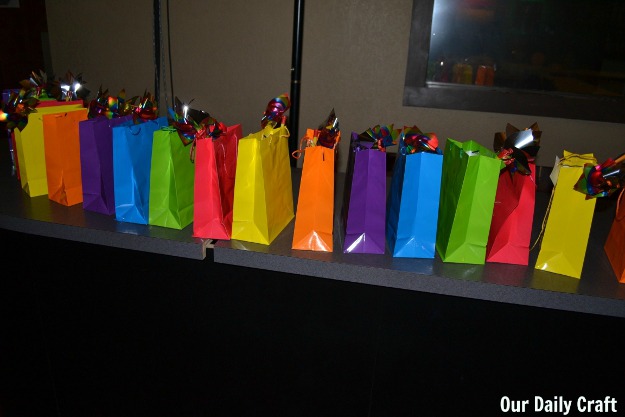 So when I picked out her party favors — rainbow-colored inflatable balls, pinwheels and lollipops — I chose to put them in bright colored bags in a rainbow of colors. That way we had a little more brightness, and it felt special to the kids because they could pick out their favorite color even though the bags were all the same.

I didn’t have a lot of time for setup, and of course the girl wanted to play immediately, so I took stock of the space really quickly and set to work. The gift bags ended up on a back counter by the door in a repeating wave of color.

The center part of a long table became party central, where I set out the tablecloth, plates and stuff. I was impressed with the quality and durability of the paper goods and the forks. All held up well to giant slabs of rainbow cake and looked good doing it. 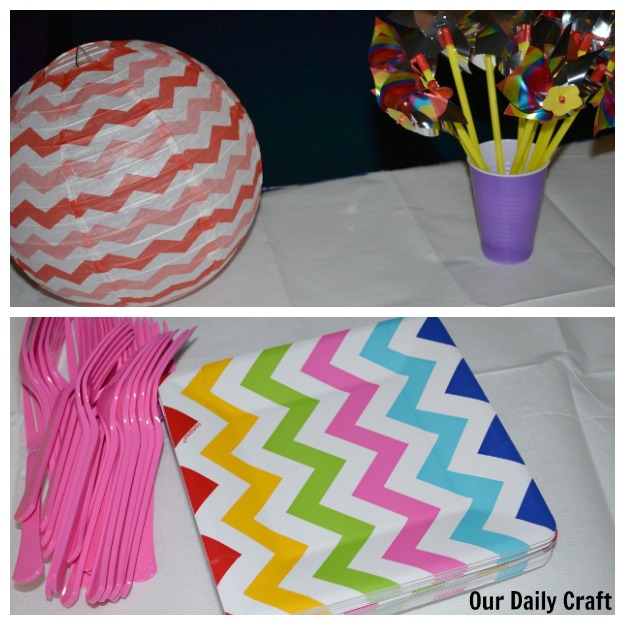 The ceiling was much too high to actually hang anything from, so I put the paper lanterns on the table, along with some extra rainbow pinwheels.

Everyone had a really great time, and while I know she loved picking out the decorations, and she loved her cake (again), that’s not really the most important part.

But getting to run around crazy with friends, eat popcorn (they kept the popcorn machine in the old snack bar) and cake was really what it was all about.

Do you do themes for your kid’s birthdays? Do they choose or do you? I’d love to hear about it!