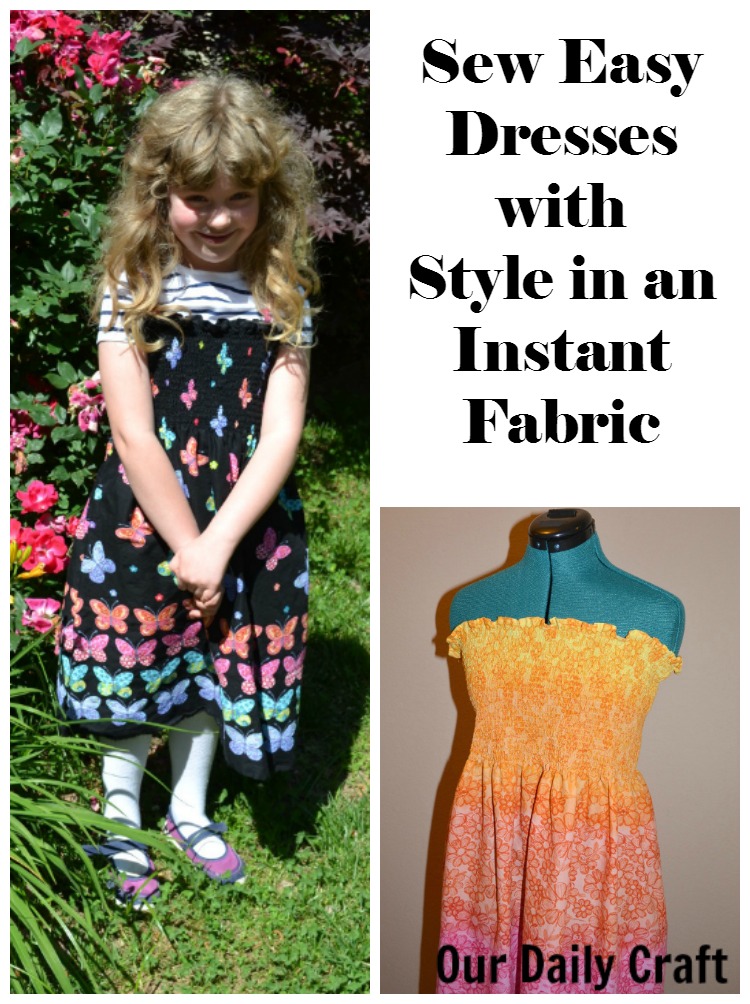 I love the idea of sewing clothes, but maybe not as much the execution. You may remember that I’m afraid of zippers, and there’s only so much you can do with an elastic waistband (and even those I manage to mess up sometimes by making too big, but at least that’s easily fixable).

That’s why I love Style in an Instant fabric. This is fabric that’s shirred at one end and comes in a variety of pretty patterns, usually with the bottom being a selvedge edge so you don’t really even have to hem it if you don’t want to; just sew up the back and you’re done (thus the name Style in an Instant, because you can make a dress in just a few minutes).

The downside of this fabric is that it’s expensive, but I picked up a couple yards (well, a yard for me and 3/4 yard for the girl) recently when it was on sale at JoAnns. 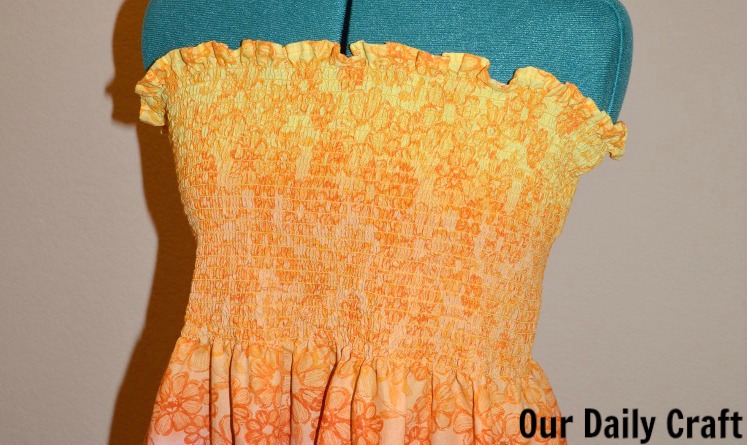 The only trick with this fabric is getting the chest measurement right. It should be about two inches smaller than the widest part of the chest because the shirred part of the fabric stretches like crazy, and if you don’t add straps you need it to be tight enough to hold onto your body.

I didn’t actually measure either garment, I just kept trying mine on and re-sewing the seam until it felt right (it took about four tries). On the girl’s I got it mostly right the second time, though I think it could actually stand to be a bit tighter.

I also added straps to hers, made out of rainbow-colored wide rick-rack I had in my stash (you may have seen it on my ribbon organizer), which you can’t really see in the picture because crazy hair. I just measured it against her body when she had the dress on and sewed the straps to the inside of the fabric, going back and forth a few times to secure. 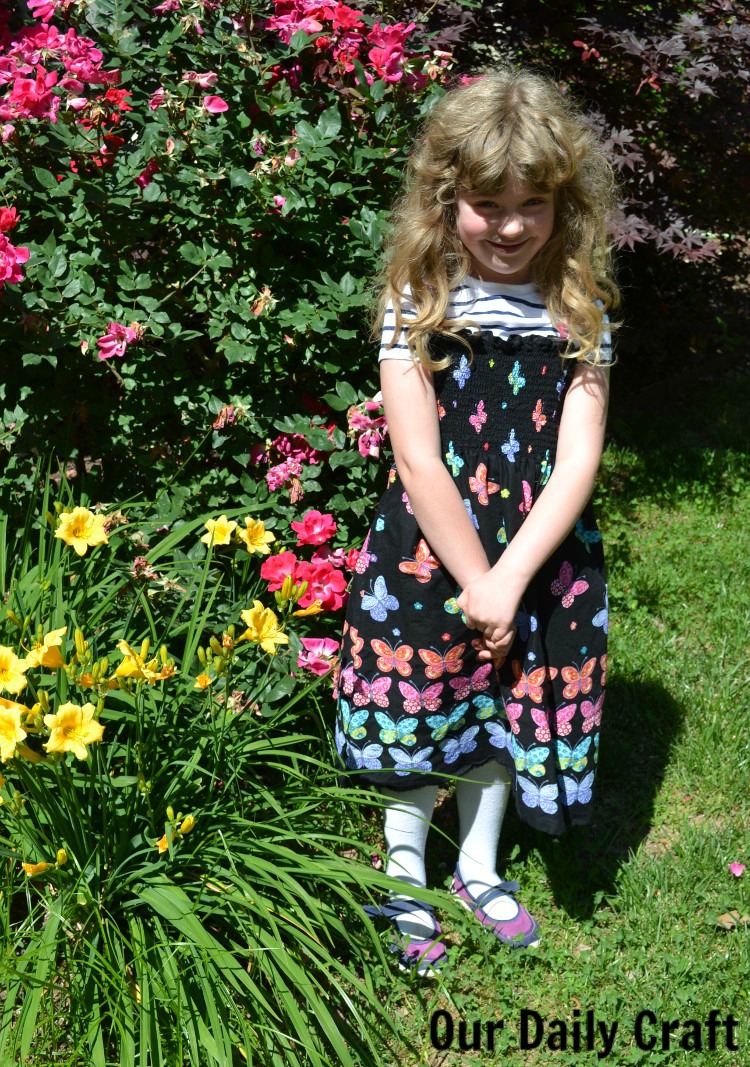 I haven’t hemmed hers yet but it needs it because the edge is raw. I did hem mine because, though it was a selvedge edge, it had pin holes and just didn’t look that great. Plus it only adds about five minutes to the process, so it still lives up to the Style in an Instant name.

She wanted to wear her dress immediately and pose for pictures in the bright sun by the flowers. She actually slept in it, then wore it again for part of the next day. She decided it needed a shirt under it because the shirring was itchy. That’s also a great way to help hold it up if you don’t install straps. 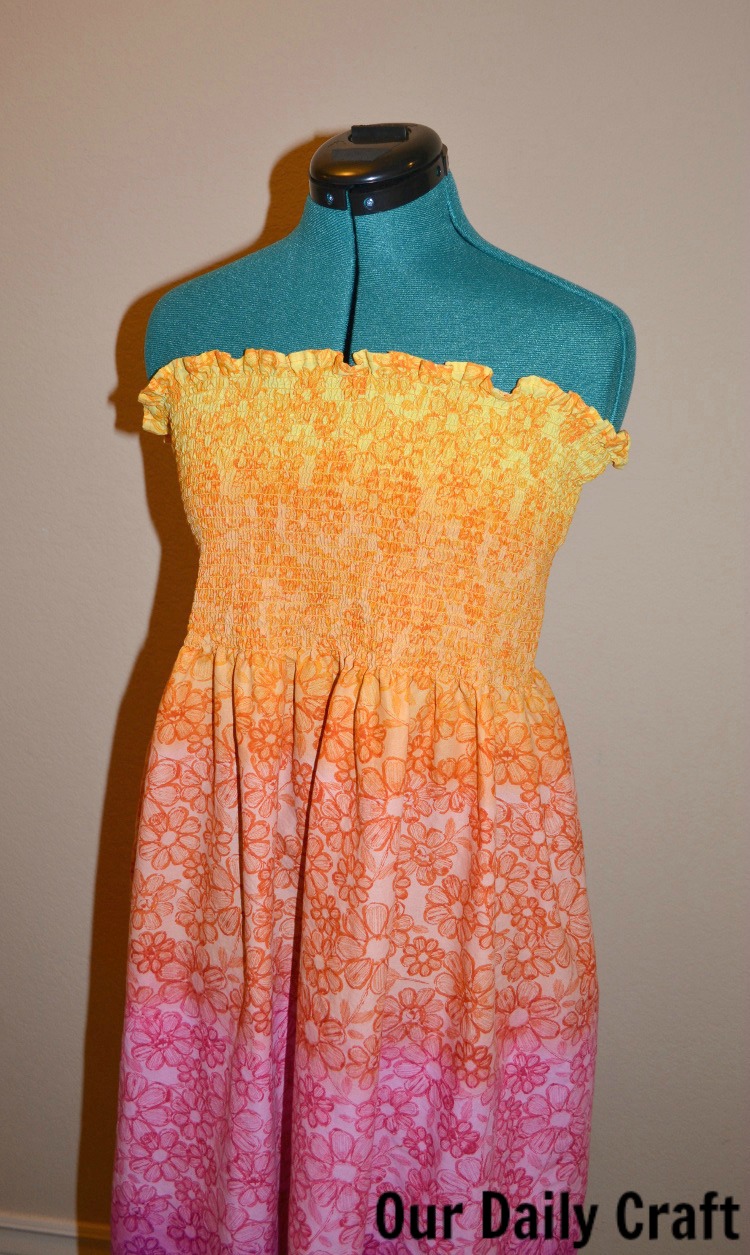 I haven’t added straps to mine yet but I probably will. It looks pretty good on Eme anyway.

Have you ever used Style in an Instant fabric? What did you think of it? I do love the speed and the cuteness of the prints, and will probably make more of these dresses for the girl, and maybe for me, too.