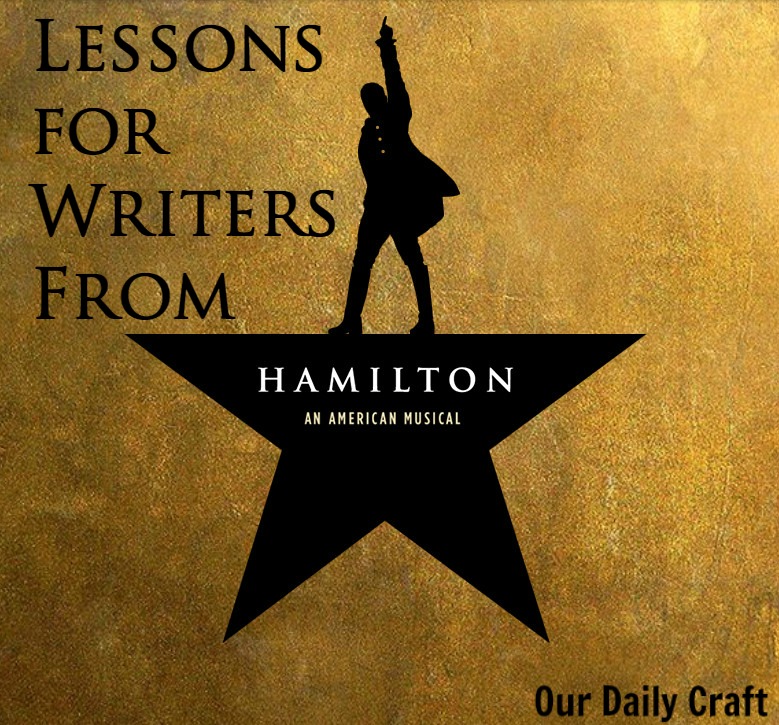 I am maybe more than just a little bit obsessed with “Hamilton: An American Musical.”

When I first listened to the cast recording, I didn’t really know what I was getting into. I just knew a lot of people loved it, it had won all these awards and I had, through other things, learned about Lin-Manuel Miranda and really come to respect and admire him before I ever listened.

And then I did, and became a complete fangirl. I bought the recording on iTunes, I listen to it in my car pretty much all the time, it’s my house cleaning music. I made myself a “Young, Scrappy and Hungry” background for my computer. I follow Lin-Manuel everywhere (in the social media sense). I bought myself a couple of shirts from TeeRico.

Superheroes day at my daughter’s school. I went as @Lin_Manuel. #nonstop #hamilton pic.twitter.com/bGcMLKmdG2

I love it for the same reasons everyone else loves it: the favorite lines and phrases that make you smile in just about every song, the way you can still feel the emotions even after repeated listenings (“Dear Theodosia” and “It’s Quiet Uptown” still make me teary), the way it makes you care and teaches and entertains all at once.

But I think, as a writer, there are other reasons to love it, and there are actually a lot of lessons for writers from Hamilton. Even if we’re not writing day and night like we’re running out of time.

The first thing to know about “Hamilton,” even if you’re not a writer, is that it’s a great story. It’s the kind of American story at least some of us like to believe is still possible. (“Immigrants, we get the job done!”)

It’s right there in the first song: a bastard, orphan, son of a whore becomes a hero and a scholar, a founding father on the power of his hard work and intelligence. Who wouldn’t be interested in how that happened?

And yet, it was a story that history forgot, which makes it exactly the sort of story we’re supposed to be interested in as writers. It’s a story that speaks to what it is to be American in the best possible way, and that it’s never an easy story.

Our stories aren’t always going to be this grand, but we need to care about them and give them the respect of telling them well regardless. 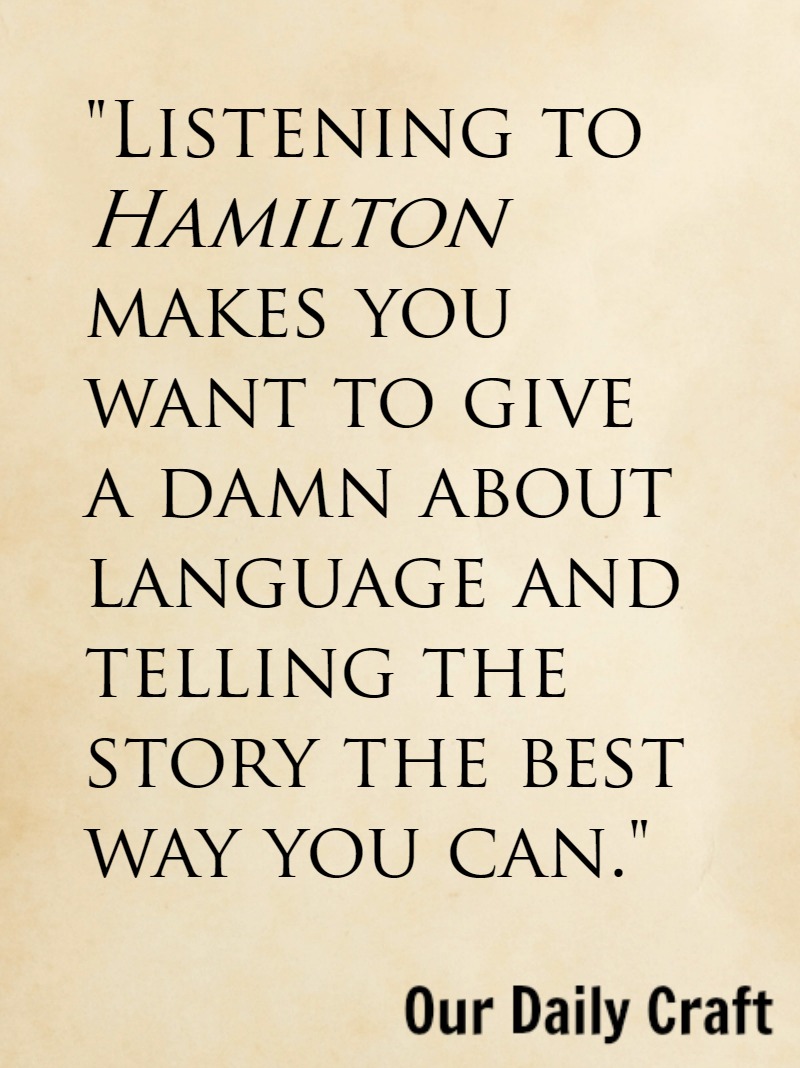 “Hamilton” is that kind of puzzle for me. It was for Lin-Manuel, too.

Listening to the rhymes, the word choice, how he managed to pack in so much information and make it entertaining to the point you want to sing along to a song about a cabinet meeting feels pretty magical.

It’s not, of course; it was immensely hard work, and as writers we can see that and respect it. He pulled it off by being brilliant, by working his ass off, by knowing his material and really inhabiting it, writing and rewriting and testing and trying again and working it until it was as good as he could make it.

We don’t have that much time to finish our projects most of the time — he’s said writing “My Shot” took a year because “every couplet needed to be the best couplet I ever wrote” — but we can always take time to do a little better, to find a more perfect word, to cut out an unnecessary phrase.

Listening to Hamilton makes you want to give a damn about language and telling the story the best way you can.

“Hamilton” is a story about writing. How the bastard orphan managed to rise so high was because he was smart, because he could write. He used his undeniable skill with a quill to change the world, to build his life and ultimately to destroy it, too.

It’s not a happy song, but I love “Hurricane” because it expresses what Hamilton’s writing was to him, what it can be for all of us when we are honest and work hard and truly try.

I wrote my way out

Wrote it all down far as I could see

Isn’t that what we’re all trying to do? Observe. Tell your story in the best way you can.

I wrote my way out of hell

I wrote my way to revolution

I was louder than the crack in the bell

I wrote Eliza love letters until she fell

I wrote about the constitution and defended it well

And in the face of ignorance and resistance

I wrote financial systems into existence

And when my prayers to God were met with indifference

I picked up a pen, I wrote my own deliverance

I know this song in the performance is amazing, though of course I haven’t seen it. This video is fantastic and really gives you a feel for the song even without live actors.

This is a story that will make you feel good to be a writer, to understand that even if we aren’t changing the world, we have power. Or, as Lin-Manuel put it himself in an interview with Time Out Chicago (written by a friend of mine from high school!)

You know, writers, whether they’re hip-hop artists or novelists, you kind of can create your destiny if you’re good enough and you work hard enough. And this is a guy who literally wrote his way out of the Caribbean, wrote his way into Washington’s good graces, and wrote essays about freedom when he was still a student, ratified our Constitution by writing the Federalist Papers in defense of it.

“Hamilton,” for me, is motivating, because I think it expresses feelings we all understand at the best of times in our writing. Writing our way out, writing it all down, writing like you need it to survive.

I think these are all familiar ideas and feelings to anyone who takes writing seriously.

But we don’t always treat our words and our work with that kind of care.

We forget that it’s essential to have that kind of relationship with our work.

We might not go to the extremes of Hamilton (or Lin-Manuel, for that matter) but the idea of treating your writing with respect because it is an essential part of your life is something we would all do well to remember.

Are you a “Hamilton” fan? Have you thought about it in terms of writing? Are you going to listen to the recording now that I’ve talked so much about it? I’d love to hear your thoughts.