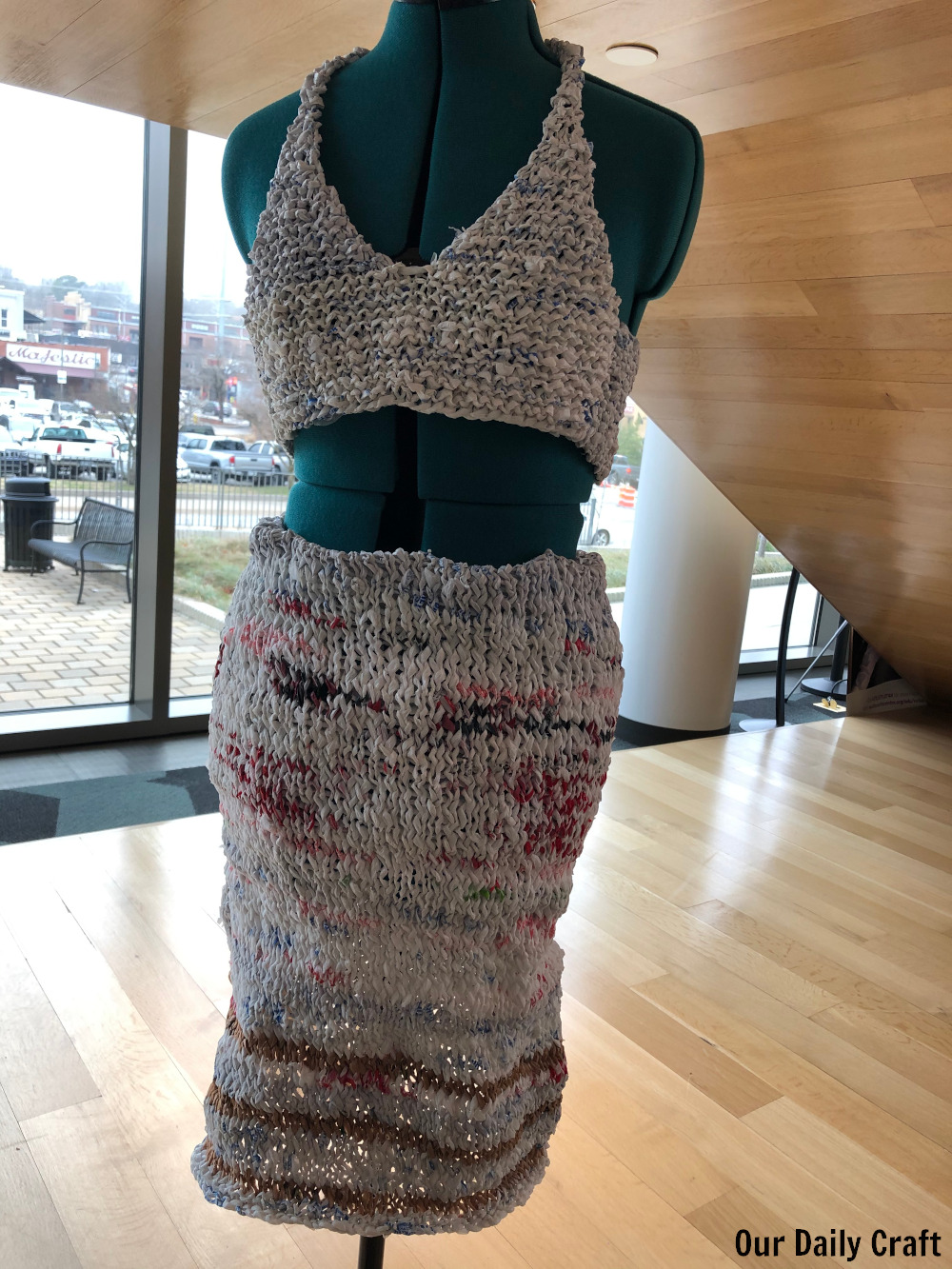 This is a story about how I came to knit a plastic dress and the awesome thing that happened next. It’s also a call to you to stretch way out of your comfort zone. Otherwise you’ll never know what’s out there.

To celebrate the national tour of Once on This Island coming to town, our local theater had a challenge to design a garment made of upcycled/recycled/repurposed materials. It goes with the theme of the play because there’s a hurricane and the characters’ costumes evolve as they pick up discarded items.

I decided to enter, just for fun. I didn’t have any illusions that I would be selected, especially since I didn’t even manage to finish my dress — actually a two-piece skirt and top knit entirely from plastic bags — before the submission deadline.

But then last Monday I got an email that my piece had been chosen and could I get it to the theater the next day?

I maybe have never knit so fast in my life, but I finished the back of the skirt and the rest of the top and got the piece to the theater, where it’s now on display for the next week.

Why Knit a Plastic Dress?

I did a little research and I’m not sure these numbers are accurate or where they came from, but it’s estimated Americans go through 100 billion plastic bags a year, and each bag is only used for an average of 12 minutes.

Worldwide only about one out of every 200 bags is recycled, so clearly this is a big trash issue.

But beyond that, I hoped that the piece would get people thinking about consumption, not only of the bags themselves but what comes inside them.

We live in a culture where throwing things away has been normalized to such a degree a lot of people don’t even think about what happens to their stuff when they discard it.

People on the whole just mindlessly buy things they don’t really need and discard those things when they get worn or broken, or they are bored by the thing, or a new version comes out. We aren’t generally a people who believe in mending, repairing and creatively reusing things.

I can’t change any of that with a dress made out of plastic bags. But I hope people see it and don’t just think “oh, that’s cool” and move on to the next thing. I hope they see it as the thought-provoking piece of art it is, even though it makes me blush to write that.

Another thing that has been cool about this process is that the artists were invited to be a part of some of the publicity for the show.

We were invited onto a local TV show to talk about our pieces. And we were interviewed for the newspaper I used to work for, which is especially fun for me. (And while I’m collecting clips, here’s one from Fayetteville Flyer, too!)

If you’re local the six pieces, chosen by associate costume designer Christopher Vergara, will be on display at the Walton Arts Center through Sunday, February 16.

OK, first, can I just pause a second on Christopher Vergara? He’s actually designed for Broadway shows and he picked MY piece of the who knows how many entered to be displayed?

And he (or someone) wrote this nice thing about it/me:

At its core, upcycling is about contrasts, as we make useful that which has been considered useless. This summer dress is a beautiful example of celebrating the contrast.

I entered this thing because I wanted to try something new. Because I want to think of myself as an artist and “not just” a knitter or crafter.

I hate that labels enter into my thinking so much, but they do. I wish I could just make what I want to make and not label it anything but mine. Maybe this will help.

It’s definitely gotten me excited to continue to try new things and put myself out there in different ways.

When I was doing the 20/20 creative challenge (emails are still available, or it should be coming soon as an expanded ebook) one of the days I wrote something about how sometimes a thing we really want to make turns out even better than we imagined. Sometimes it turns out not at all what we imagined in a bad way.

The thing is, we never know which one it will be until the thing is made.

This dress turned out a lot different than I imagined (well, that’s not exactly true, but it was supposed to have accessories that didn’t get made because I ran out of time). I didn’t think it was that good. I sent in my application when I hadn’t even knit the back yet; I was that sure it wasn’t any good.

So this is my call to you not only to make the thing even though you don’t know if it will turn out the way you expected, but share the thing even if you don’t love it or aren’t sure what the reaction will be.

Put it (and yourself) out there. Yes, I know it’s scary and hard and you’ll get rejected more often than not.

But sometimes something amazing happens and you get to add an exhibit to your resume.

How have you put yourself out there lately? I’d love to hear about it.