This is a sponsored post for Acorn Influence and Birth Center of Northwest Arkansas. All opinions are my own.

I had a pretty firm plan of what I wanted to happen when I had the girl. I was OK with a hospital birth because there was no way I was birthing at home and there weren’t any other options in Northwest Arkansas then.

In the end it was great that I was planning to be at the hospital, given that I went into labor six weeks early. But I do wonder sometimes what it might have been like if our story had been different.

It has long been the case that home birth or hospital birth were the only options here, and in a lot of other places, too. But increasingly there’s a middle way, which is giving birth at a birthing center. The Birth Center of Northwest Arkansas just celebrated its second anniversary, and it is offering women options that didn’t exist here before.

What is a Birth Center?

A birth center is more like a doctor’s office than a hospital, and #BirthCenterNWA is a lovely place, as I learned on a recent tour. The waiting room is like a dining room and kitchen, and the exam rooms are outfitted with comfy robes instead of hospital gowns. And no stirrups, ladies!

It’s meant to be a low-stress, welcoming environment that is supportive and calm but also has as the medical equipment needed for well women and prenatal care, labor and delivery and postpartum care. It’s also located across the street from Mercy Hospital and they can transfer women there should complications arise.

This is a great choice for healthy women with low-risk pregnancies who don’t want to give birth in a hospital. (There are certain health conditions that can exclude a mom from being able to take advantage of this option, such as heart disease, renal disease, diabetes, hyperthyrodism and cancer. They don’t do VBACs or handle twin births, babies who are breech at term or moms who are obese before pregnancy.)

Birth Center of Northwest Arkansas was co-founded by Cara Osborne, a nurse midwife trained at Vanderbilt who also has a doctorate in public health and formerly worked as one of 15 nurse midwives at Mass General.

When her family relocated to Northwest Arkansas there were no nurse midwives practicing here.

“A lot of people who would not have, under other circumstances, chosen a home birth did so because there weren’t other options,” she said.

The center is one of about 250 in the country, and the model is now being replicated in other places, including North Carolina, Colorado and Tennessee.

Osborne notes that this middle ground is not right for everyone, and “it might not even be the right thing for most people,” but it is available “to give people options” that haven’t always been available here. 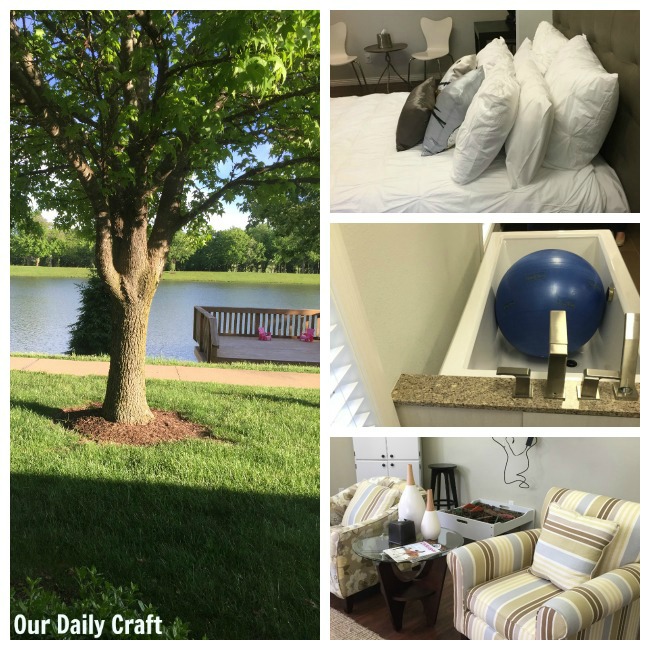 Birth centers aim to help with both of these statistics and also cost less than a hospital birth, though that savings is seen by the insurance company rather than the consumer.

The birth center offers hotel-like birthing rooms with large tubs and birthing balls. Some of the rooms have views of a pond, and a comfortable family room is available for waiting family members or for educational classes.

Laboring moms are encouraged to eat and drink, walk on the trail outside or do whatever they need to do while giving birth, and the family goes home within six to eight hours after the birth.

“Everybody rests more soundly in their own space,” Osborne said. “There’s nothing wrong with you when you’ve had a baby” so there’s no reason to stay, and they do home visits usually within 48 hours of the birth.

In addition to being a place to prepare for and give birth to a baby, the Birth Center of Northwest Arkansas is also a place to have yearly well-woman exams, get birth control, have preconception counseling and receive support after the baby is born.

They also sell some specialized items for pregnancy and parenting such as slings, breastfeeding support tools, teas and supplements and a small selection of toys. Osborne said these are things patients asked for because they can be hard to find in Northwest Arkansas.

The birth center is beautiful, calm and peaceful and would be a great place to be cared for and to have a different kind of birth experience. If you’re in that part of life or looking for a well-woman healthcare provider, check them out.

Did you give birth at home? At a birth center? A hospital? Was it what you wanted? I’d love to hear your stories!