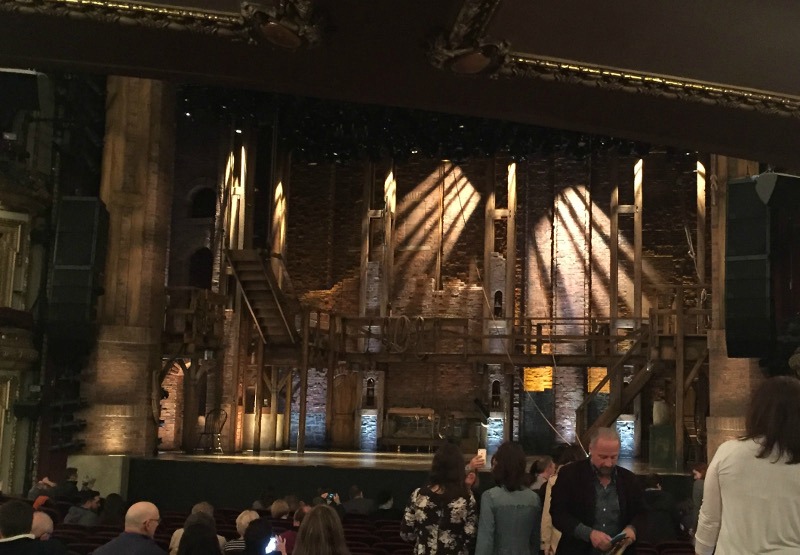 I’ve been on a “Hamilton” fast all month.

The cast recording and the mixtape.

It’s been really hard for a person who listened to one or the other most weeks for the past eight months or so.

But there was a really good reason for it. (And I was reading the Chernow book, which kept the songs in my head, so it wasn’t really all that bad.)

Last weekend my husband and I went to see “Hamilton.” For real. In Chicago. 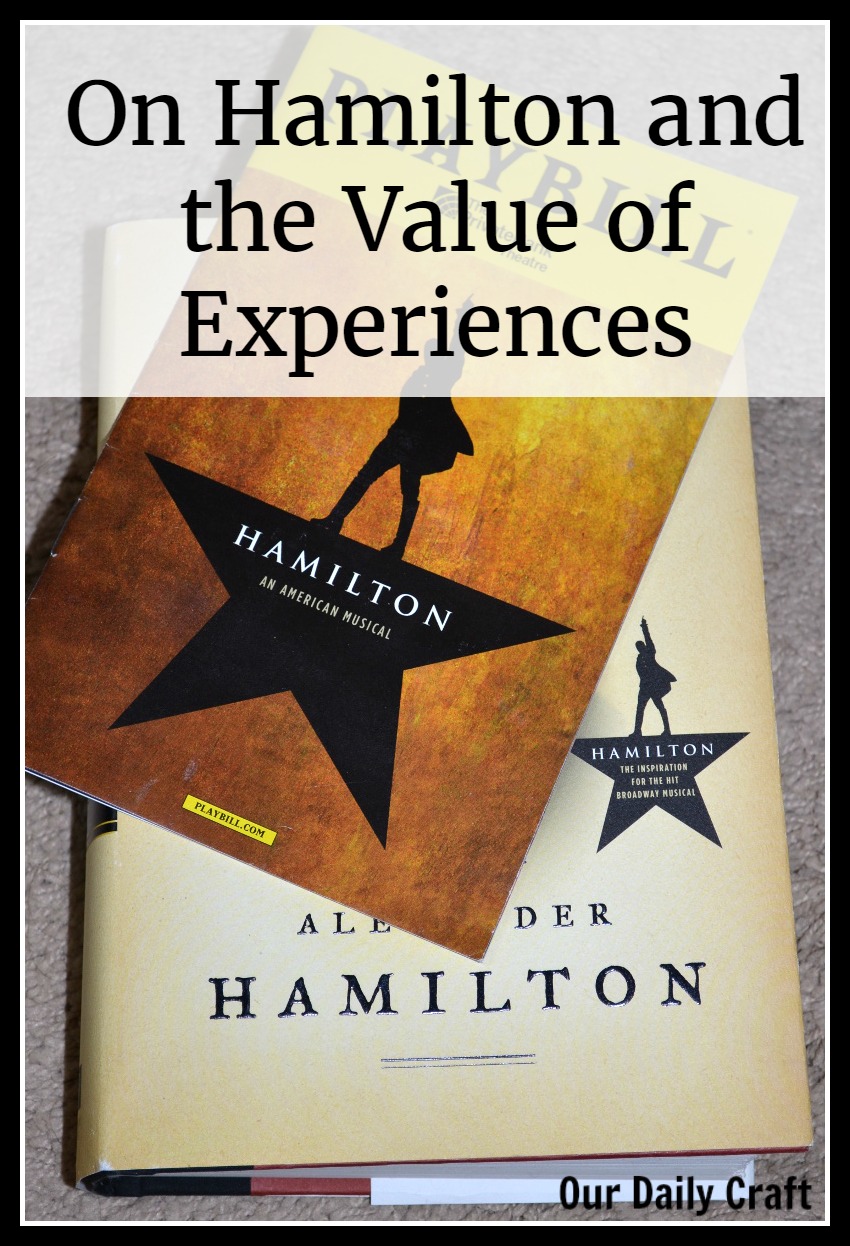 Before we went I told basically everyone I talked to that we were going. A lot of them said they looked forward to hearing all about it, and I mostly resisted saying they were probably going to have to tell me to stop talking about it because I was unlikely to shut up about it because I GOT TO SEE HAMILTON!

The Room Where it Happens

My love for “Hamilton” is well-documented (I even wrote a piece back in September about lessons for writers from “Hamilton”), so when my husband and I were thinking about destinations for a getaway to celebrate our fifteenth anniversary, I kind of jokingly said we should go to Chicago and see “Hamilton.”

My husband ran with it.

Among the many reasons I love him.

Even better, we stayed in the hotel that adjoins the theater, so we got to walk by the huge “Hamilton” sign a dozen times or more. Cue the giant grin, every time.

We went to the Friday night show, and all day I was getting more and more excited and a little nervous that it would somehow fail to meet my expectations.

But when we got there amid the crowd, and everyone was so happy to be there, snapping selfies and pictures of the set (which is tiny, by the way), I got totally swept up in the thrill of being there.

That goofy grin barely left my face the whole evening. From the moment King George tells you to turn off your cellphones until Eliza’s sigh at the end, it’s such a fun show.

It’s amazing to see how things are staged, how the show really works when it’s just been a thing in your head for so long. There are places in the cast album where you just wonder how they could possibly do that on stage (or I do), and it’s a credit to the whole team that it works so well. 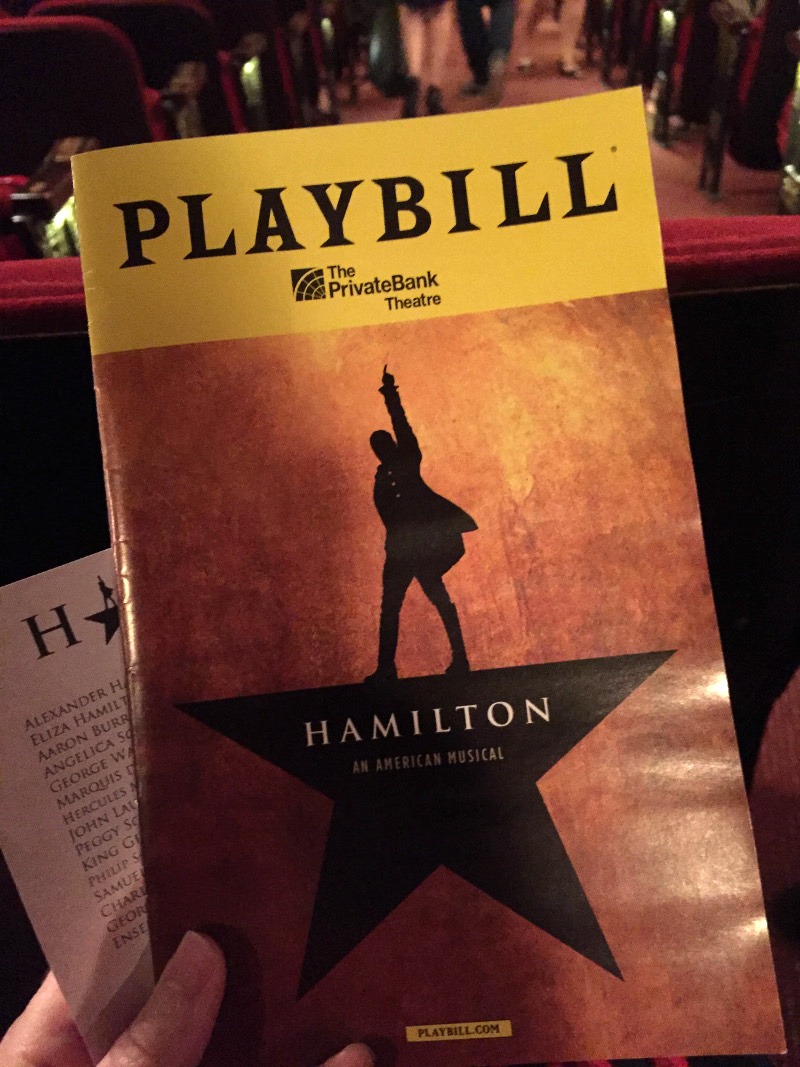 That rotating stage is insane. You have to have so much trust that everyone has hit their marks, and so much stability to dance on that thing, I can’t even imagine.

I just love how they use the space, though, and the way some scenes are done is really clever. I particularly enjoyed the staging for “The Election of 1800,” because there’s just so much going on in that song but it’s all clear on stage. And how “The Reynolds Pamphlet” sets up “Burn” is great, too, just to name a couple of examples.

I was also glad to know there are a couple of tiny parts that aren’t sung, one of which involves learning what happened to John Laurens. It always bothered me that he’s there in the opening number saying he died for Hamilton, but on the cast album they never come back to that.

I’m also happy to report the anticipated ugly crying did not happen. Of course I cried a little but I was just so darn happy to be there I couldn’t be that sad for the drama onstage. Which is fine; I’ve cried to “It’s Quiet Uptown” in my car quite enough, thank you very much.

How Lucky We Are to Be Alive Right Now

And while all of that takes you there, a little bit, I wish there were more I could say to convey what it’s like. If you’ve ever been really psyched to go to a concert or a show, or to see a movie you were waiting for forever, I guess it’s like that.

But I’ve listened to the album so many times that I feel like I know these characters, these actors, even if they aren’t the same ones from the original cast. So there’s almost an aspect of cheering on a friend, like you are so excited to see them do well.

I don’t know how to explain the feeling when you hear those first few notes and Aaron Burr is finally in front of you. How it is to really see “Yorktown” instead of just playing it out in your head. Anything I can say won’t quite convey how special it is.

I can say that you have to go see it if you’re a Hamilton fan (and if you’re not, give it a listen and you probably will become one).

Go to a touring production if its anywhere near you. Or spring for a trip to New York if you can. Just do this thing, go have this experience and see if you can put better words to it.

Go do that thing. You’ll be so glad you did.

I can’t say seeing amazing theater in Chicago was ever on my bucket list before “Hamilton” (not that I really have a bucket list) but I would have regretted not going when I had a chance to.

I like talking about the value of experiences over things, and this trip proved that value in a big way. It gave husband and I time — just our second trip alone together in almost eight years — we got to explore museums and walk the city together, have drinks at a rooftop bar and huddle against the windy cold in the same day.

It was fun and relaxing and wonderful and all those words that don’t quite describe it, and yet you probably understand.

Make the time to have experiences with the ones you love. The memories we’re building will someday be all that is left. Make some good ones.