I decided last Monday that I needed to get a bunch of stuff done. I needed to start exercising again, and make about 17 phone calls, do some chores, send some e-mails and actually do some work, too. So I declared it Getting Things Done Day, and though I may not have scratched off all 16 things on my list, I did make good progress and I was reminded of some things that help when I need to get a lot done. Maybe they’ll help you, too. There’s a lot of ground so I’m going to break it up into a couple of posts. 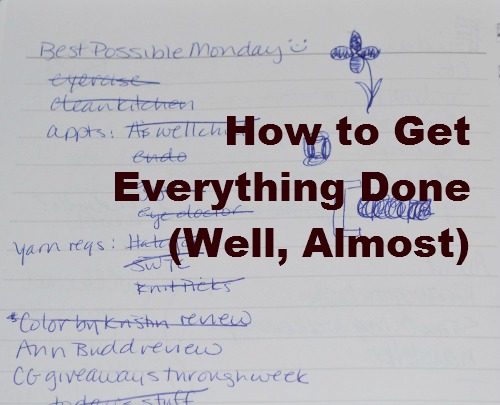 Exercise First (Or at Least Early)

Whenever I’ve been able to exercise consistently, I’ve always done it in the morning, usually right after I get home form taking the Bit to school or soon thereafter.

I used to have a rule that I would have to exercise first thing when I went upstairs (or before I started working if I was doing a Netflix workout). If I tried to start work and then workout later, I’d never get back to it.

So I came home, loaded the dishwasher and hit the exercise bike. I didn’t make it much more than 30 minutes, but it was a good start after a month or more of not working out at all. Since then, I worked out four days last week, including one hour-long “ride,” and have already logged my time for today, too.

Do the Yucky Stuff First

This is not still about working out, but if you have other unpleasant things to do, it really helps to get them over with as quickly as possible.

I hate making phone calls. I put it off forever. When we moved, I waited until the last possible day to change my voter registration. It took 46 seconds.

So it happens that I’ve been putting off making a whole bunch of appointments — three for me, one for the Bit — so I decided I needed to start my day with a mess of phone calls. I got three out of four done (and the other got resolved the next day, so yeah).

When you get the awful stuff done first, you feel like you’ve accomplished something, and there’s a weight lifted that’s probably been lingering for a long time if you’re doing something you’ve been putting off.

When I made up my list, I put exercise on it because I knew I’d do it (or at least be more likely to) if I actually wrote it down. I also wanted to be able to cross it off my list.

Instead of writing “make phone calls,” I made each appointment a line. That makes my to-do list three lines longer, but it also gives me more satisfaction as I cross things off my list.

I don’t know if psyching yourself out in this way will work for you, but it totally works for me. On really bad days I will put showering on my to-do list because at least I know I can get that done. Usually.

When I’m running errands I won’t just write down “errands,” I put bank, post office, Target, whatever. That way as soon as I get home I already have a bunch of things I can cross off!

Do you have strategies that help you get more done? I’d love to hear about them! And I’ll be back tomorrow with a couple more tips and a look at my crazy calendar!