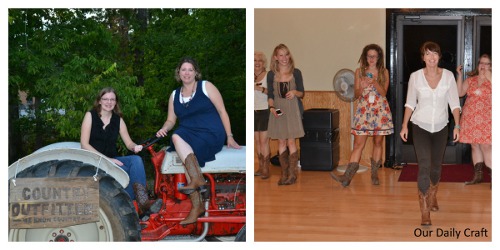 A is for Arkansas, of course. It’s where most of us live, and where we gathered for a couple of days to celebrate this weird thing that we do. (It’s also for AllYou, a fun magazine you’ll find at Wal-Mart, which was one of our sponsors.) You couldn’t escape the beauty of our surroundings in Mountain View every time you stepped out the door. (There were some pretty beautiful people there, too.)

B, naturally, is for boots as well, since most of us came away with a beautiful pair from local ecommerce company Country Outfitter.

The weekend was crammed full of great activities, and by the end our heads were pretty crammed, too. There was only one point where I had to skip an activity because I just needed some peace, and I’m pretty proud of that. (C should also stand for the crazy curvy roads we had to take on our journey.)

There was lots of delicious food from our sponsors (which we’ll get to) and the great folks at the Skillet, even if we did scare the locals a little. Also, I find it pretty daring of some of us to make the trip, even though most of us admit to being shy, nervous or fearful of feeling out of place. But thanks to the exuberance and encouragement of the excellent women around us, I think most everyone felt welcome and as if they belonged there (because they did).

Because we were at the Folk Center, there had to be some crafting, and I was excited to take part in the felting even if I did smell like a wet sheep the rest of the day. Also a shout-out to Farm Bureau for being one of our sponsors, and for the guy from the bureau who visited us for part of the event.

Some of the bloggers took part in Foodie Friday, an event that taught up about photography, food styling, flea-market finds, technical stuff and more. They’ll be more about that tomorrow, I think.

The whole weekend was a way of getting to know fellow bloggers, even if they were people we’ve read for awhile and really wanted to meet but just hadn’t had the chance yet. It was a great gathering of people you’ve wanted to know and people you didn’t know to wish you knew until you met them. (Clearly I cannot link to everyone I met in this post, but you’re all wonderful.)

We learned about, cooked with and ate fresh herbs from the garden just steps from our conference center and were educated by the awesome Tina Marie (more on her tomorrow, too). H is for another great sponsor who gets its own post, Healthy Families. Because even if you don’t have kids, the health of your community should be important to you.

Speaking of food, I is for Iron Chef, sort of. We Foodie Friday participants used some of those herbs to make appetizers for the women who were arriving for the rest of the conference. My team got rosemary, and we made a watermelon salad, cheese toast with sauteed vegetables and lemonade. Yum! I is also for ice cream, which we ate plenty of thanks to a sponsor you’ll see later in this rundown. And inspiring.

J is for jig dancing, or at least attempting to. We got lessons in the basics (which most of us could not even handle) from the adorable Miss Clancey, who is a teenage fiddle-playing wonder. She was so much fun, and tolerated our shenanigans pretty well. Example: did you know the basic step of jig dancing bears remarkable similarity to the Running Man?

K is for kids, though, again, we’re not all moms, we were thinking about little ones and sharing our stories about them a lot. And Melody, the beautiful presenter from Healthy Families, as well as Meredith, another presenter, are both pregnant, so the next generation was never too far from our minds. K is also for one of my new blog crushes, Kyran, who is lovely and smart and shares openly. Oh, and she’s a knitter (there were a few of us there, but she and I were the only ones to pull out needles). And for getting Klout in tractor, which Sarabeth explains much better than I ever could as a mere witness.

L can be for nothing but loud, because that’s what 70 women bloggers are when you get them together. Also, love, because I think we shared a lot of that this weekend, and surely loved the time we had together. And Lela, who I’ve heard speak three or four times lately but who always has something important to say.

M is for the token men, all somehow connected to sponsors, but who were game to attend an event with “women” in the title and I think were welcomed just like one of the girls. Sort of. A special thanks to Mr. Park Wife for making Boca Burgers for the vegetarians and this semi-veg girl who had grown tired of pork by the last night. And mason jars, our beverage container of choice.

N is for the sharing of new ideas that happened throughout the weekend. Thanks to our openness with each other and willingness to share our passion, we were all enriched. I think we all left with a great sense of pride around what we do as bloggers. We also left full of pork thanks to sponsor and Arkansas company Petit Jean Meats.

I mentioned loud, but there was also some quiet to be had. Stepping out of my cabin on Sunday morning, it was so still I even said to the lady at the office “I know this is dumb to say, but it’s so quiet here!” The silence was broken by Aretha Franklin on her radio, which was fine by me.

R is for revelatory, because I think we all revealed something of ourselves and had some truth reflected back on us that will make us better bloggers and better people. It’s also for my roomie Rhonda who was brave to come even though she was worried about it being too technical.

S is for stories, as I mentioned earlier. The stories we heard, the ones we’re telling now, the ones we won’t be so worried about telling in the future because we had this conference to inspire us and remind us why we do what we do.

T is a bit of backwoods Arkansas culture: “turn the truck around.” Stone County is drier than an Arkansas summer (there is, in fact, one restaurant in the county that sells alcohol; that’s just not how we do dry counties where I come from). To work around that, you have to be prepared. Tradition holds that, when going to a shindig or hootenanny, one keeps their liquor stowed in the back of the pickup. When the appropriate time appears, someone says it’s time to turn the truck around. Whether there’s literally turning of the truck as their was this weekend or merely a visit to the truck bed, the party starts to get better once the truck has been turned.

Man, this post is crazy long, so if you’re still with me, a lightning round for the end. It was a weekend full of understanding, both in that we understood each other and came to a better understanding of why we want to blog. By the end I didn’t feel silly calling it a vacation, because it was so lovely hanging out with all those excellent women. I hate lists with fake x entries, but the best I can do is the weekend left me both exhausted and excited about changes I can make here and attending next year.

Y is for yes, because there was a marriage proposal at the event and that was the answer. If you’ve ever wondered about the power of this medium, read Gina and Thom’s story. Y is also for Yarnell’s, the yummy Arkansas ice cream we’re so happy to have back.

Z is for zesty conversations, tons of one-liners and another awesome sponsor, Ziploc, who provided all sorts of great containers for us to try. More on that later, too, I’m sure. Oh, and zebra-print Duck Tape, of course.

Whew! I’m as tired as if I’d just driven down the mountain!