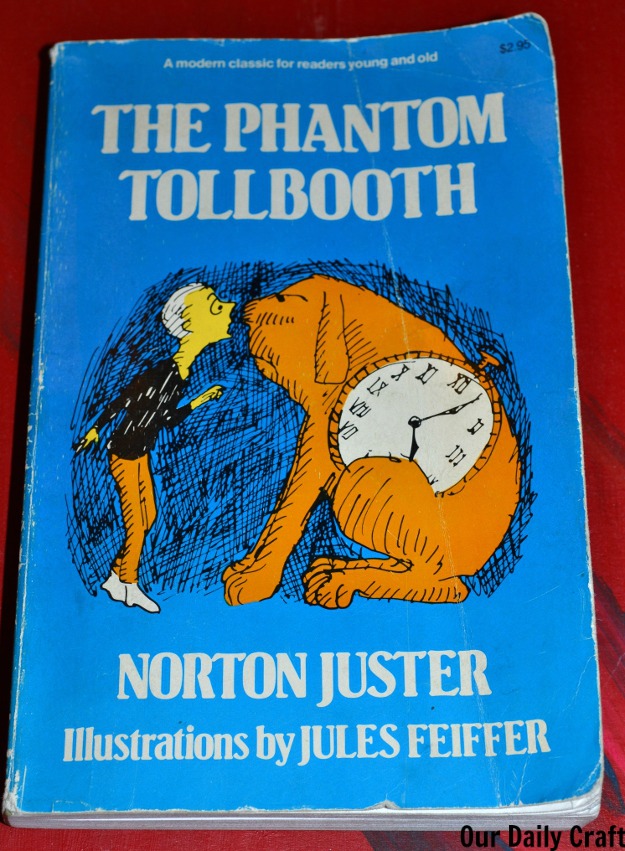 But one book I have always loved, and that I couldn’t wait to read to the girl, was The Phantom Tollbooth by Norton Juster.

Everyone I talk to about this book either loves it or has never heard of it. I don’t think it’s possible to not like it (and if you don’t, please let me know because I don’t think we can be friends anymore if that’s the case).

If you don’t know it, it tells the story of Milo, the quintessential bored kid, full of middle school ennui who gets taken on an amazing adventure through the kingdom of wisdom.

“There once was a boy named Milo who didn’t know what to do with himself–not just sometimes, but always,” the story begins.

With the help of a tollbooth that mysteriously appears in his bedroom, he visits the lands of Dictionopolis (where words come from) and Digitopolis, ruled by warring brothers both convinced their part of the world is most important. There’s a Humbug, a ticking watchdog named Tock, two princesses named Rhyme and Reason, a trip to the Doldrums and so much more.

It is punny and silly and funny and delightful. When I mentioned I was reading it to the girl, I got comments of love from a lot of my word nerd friends.

I really think this book is the way we get kids interested in language, in storytelling, in having fun with words.

[Tweet “Want to raise a kid who loves language? Read her The Phantom Tollbooth.”]

It’s probably mostly going over her head, but we’re up to chapter seven and she keeps picking it back up and telling me she thinks it’s funny, but that could just be because of the dog with a clock in its side.

Whatever. I’ll take it. I love that we are getting to share this book and hopefully will read it together a few more times as she gains more understanding of what it’s really about.

What book from your childhood were/are you really excited to introduce to your kids? I’d love to hear about it!