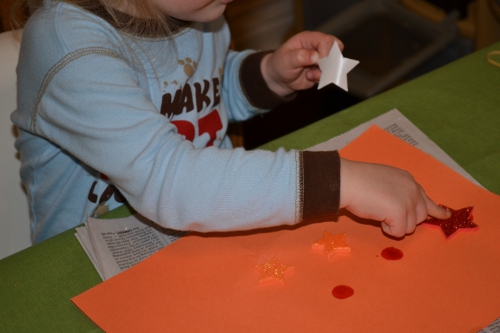 Last Tuesday when my girl was home sick, we spent a lot of time doing art. They’ll be more on exactly what all we did later this week, but I wanted to mention separately something that she did all on her own that I though was pretty cool.

First, she asked for the dot markers (aka bingo markers) and some star-shaped, glittery foam stickers. Usually when she uses the dot markers she doesn’t really make dots. They might start as dots, but then she drags the marker and it ends up making more of a comet shape.

Then she went for the stickers. I’d just given her a handful and wasn’t paying attention to colors. But she apparently was, because she picked out three orange stickers and put them on top of the three blue dots.

Then she got a red sticker and put it on one of the red dots. There was only one red sticker, so she left those for a while, got the green marker and made three dots again, which she again covered with green stickers.

Finally she added yellow stickers over the other two red dots.

This was all very impressive to me, because it showed me that she was picking out colors on purpose and making her own pattern. That’s not something I see her do spontaneously (though at night when we read The Shape of Me and Other Stuff, she points out the outlines of the boy and the girl and will say “There’s a boy, there’s a girl. That’s a repeating pattern!” which is hilarious to me).

This may be an activity I set up for her on purpose again. You could easily take any paper and put different colored dots on it, then give your kid stickers and see what he or she does. Or you could print out a set of the 1-10 number sticker sheets from Confessions of a Homeschooler and see if your child will put the right number of stickers in each row.

Or you could deliberately choose stickers of different colors and see if your child groups them together or makes a pattern in how she or he puts them down.

I’m sure there’s something educational I should have said in reaction to this “project,” but mostly I was just really surprised this was a way she’d choose to play.

Have you ever noticed your kid spontaneously playing with patterns or grouping colors like this? I’d love to hear about it.

Thanks for stopping by, sharing and commenting!

This post is linked to Strictly Homemade Tuesday and at Get Your Craft on at Today’s Creative Blog.