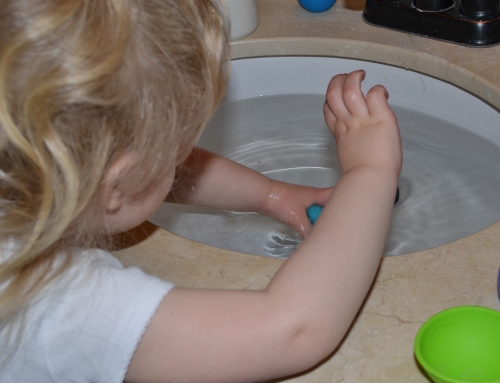 Last Monday when the Bit was home with me I followed her around with a notebook and a camera. I thought it would be funny to document all the different things we did to compile into one big play-by-play post, both as a chronicle of what a day with a kid at home (even a sick kid) is like and to show how many different things a kid can get into in any given day (I started my list around 7:45, and she did 15 different things before her snack at 9:45).

But there’s an adage in blogging that you should only talk about one thing at a time, so I thought I’d highlight a few activities that were new or different or particularly fun, and save the rest for a roundup list of X things you can do with a slightly sick toddler.

The only time I really tried to direct her activity was after her nap when she went for the television. I’m not against a little TV, especially when she’s sick, but I asked if she wanted to go outside instead and she said yes. Though it’s out of season, her empty water table and her water toys are still on the back porch, and that includes a bunch of little squrity toys shaped like animals.

A couple of blue frogs came inside with us, and, after playing with them in the hall for a little while, the Bit took them into the bathroom.

I asked if they wanted to take a bath, and she said yes. I asked, “with water beads?” She said “yes.”

We only have clear water beads out right now, which we recently learned “disappear” in water, so I thought that would be a lot of fun. And it was.

She loved watching them go in, and sticking her hands in and coming up with water beads she couldn’t see.

Her favorite thing to do was to have me scoop up some beads and she’d knock them off into the water, marveling at how they would disappear when they hit.

This was definitely a fun new experience for us, though it did get a little wet after a while and required a fresh set of clothes in the end. And, hey, the frogs got clean.

I should mention that some people complain about the bouncy nature of water beads, and in this format I had no problem with bouncing! There is the issue of cleanup, because you don’t want them to go down the drain and you can’t see them when there’s water in the sink. I used a small strainer to pick up as many as I could, then I just barely opened the drain to let the water out but not so much that any beads could get out. If anything went down the drain it was just the tiniest piece of a bead.

(Incidentally I’ve read, though I didn’t save the link to credit it, that you can put a piece of pantyhose over the drain hole to keep the beads from going down the drain, but you’d probably have to be able to see them to ensure none were on the wrong side of the hose before you pulled the plug.)

Thanks for stopping by, and for sharing and commenting!

This post is linked to Made by Little Hands Monday at Delicate Construction, A Marvelous Mess and to Motivate Me Monday at Keeping it Simple. Visit them for lots more great craft ideas!