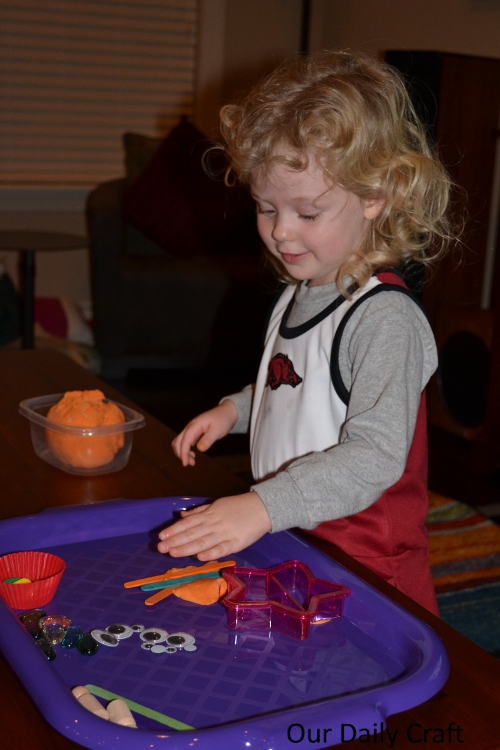 Regular readers of this blog will know that I’m just a wee bit obsessed with homemade playdough. I’ve made no fewer than six different versions and actually have my favorite recipe memorized.

That one makes a lot, so I lately have been making a half recipe, which still seems to make a lot, but stored properly it lasts a really long time (that purple stuff we made in April is still going strong, though not as soft as it used to be; we have another batch we made in July that’s about as nice as the day it was made).

I’ve never really made seasonal playdough before, but a couple of experiments I witnessed at the girl’s school recently made me try out some black and orange playdough for Halloween.

The first one I made was the orange version. As I mentioned, it’s half of the recipe linked above. I used two packets of orange Kool-Aid because I wanted it to be really orange, and one just didn’t do it, even with the half quantity.

I wanted to make it smell like fall, too, so I added about a tablespoon of pumpkin pie spice (I bought the Best Choice brand for 89 cents; if you can’t find the cheap stuff just use cinnamon) which is what added the darker flecks you can see. It really does smell nice, and that was an added perk while I was making the dough.

I had seen (and maybe even pinned?) the recipe for what’s known as Galaxy Playdough on Pinterest, which is black playdough that you give the kids with glitter to sprinkle on to make it look like the Milky Way. (I saw this on Fairy Dust Teaching, but there may be others.)

I don’t have a lot of glitter in the house, but when the Bit’s teacher started making black playdough the other day (she used washable paint to color hers and added white glitter) I decided I wanted to give that a try, too.

I used the same recipe but added a whole 2 ounce container of black food coloring (locals, I found this at Harps, but I think Wal-Mart may have it, too, particularly at this time of year) and two .07 ounce containers of glitter glue, one blue and one green.

That amount of glitter did not make a really dramatic effect. If you have bigger containers of glitter glue, use one or two, or just a generous sprinkling of whatever glitter-type product you have on hand.

The Bit wanted to play with the orange before the black was even cool. I made these on Friday last week and she went back to them over and over during the weekend and again this morning before school.

I wanted to get her some Halloween cookie cutters to play with, but neither my local grocery store nor Big Lots seemed to have any (and though the galaxy playdough post says she got her black food coloring at Big Lots, I didn’t find that there, either).

So I gave her a tray of random stuff like I do with our gak play — a regular cookie cutter, some eyes, buttons, craft sticks, plastic bottle lids, glass stones, some little wooden people — and she liked that just fine. She actually wanted to get the gak out, too, when she saw all those things she was used to using her gak with.

(I was careful to watch her and make sure the gak in particular stayed on its own tray!)

So I would say this experiment was a big success. The black playdough is a little messy, especially if you get it under your fingernails, but it does wash up pretty easily and having an unusual color is fun.

Are you doing any fun play things centered around Halloween? I’d love to hear about them!

This post is linked to Busy Monday at A Pinch of Joy, Made By You Monday at Skip to My Lou and Just Something I Whipped Up at The Girl Creative. Visit them for many more crafty ideas!