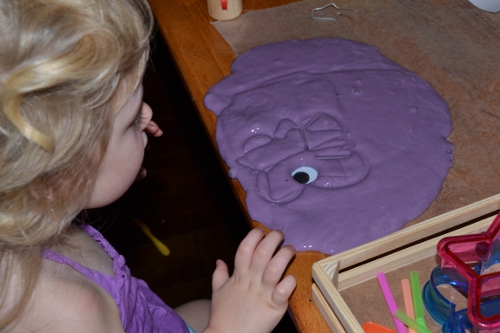 Last week my daughter was home from preschool for “summer break,” and I wanted to do some fun, new things with her. We went on her first trip to the museum (didn’t see any art, but that’s for another post), had her first homemade popsicles and made her first gak, among other things.

I’ve been thinking about gak for a while now, and there are recipes all over Pinterest. When a friend of mine pinned one I jotted down the ingredients (because I’m too lazy to print out things that can fit on the back of an old business card), got the necessary supplies when the Bit and I went shopping and, the next day, we decided to make it. It was a lot of ooey, gooey fun. You should try it, too.

At first I just gave her the gak in a bowl, but of course that wasn’t very exciting, so we soon dumped it out on the table on a piece of waxed paper. After a bit of poking, she decided she wanted to press stuff into it and went to her kitchen and started putting plates in the gak.

I realized this was a great idea so I ran upstairs and grabbed a box and threw some random things into it to poke into the gak. Such as:

These were all things that were just lying around the house, most of which had been previously purchased from the dollar store. You never know when that stuff will come in handy!

I don’t know how I didn’t get a good picture of her playing with all that stuff, because in time a bunch of it was used and she actually spent a good 45 minutes playing with it that first time out.

I also do not have pictures of the playdate we had a couple days later, when kids and parents both enjoyed playing with this mucky stuff. We did realize, however, that it’s a really great idea to play with it on a tray rather than just on the table. It tends to creep and kept trying to squirm off the table! Our trays are these:

(that’s an affiliate link, by the way)

If you’ve been hesitant to make gak, I really think you should do it. It’s kind of gross, but also lots of fun!

Have you had any messy fun with your kids lately? I’d love to hear about it!

This post is linked to Busy Monday at A Pinch of Joy, Made By You Monday at Skip to My Lou and CraftOManiac Monday. Visit them for tons more great crafting ideas!