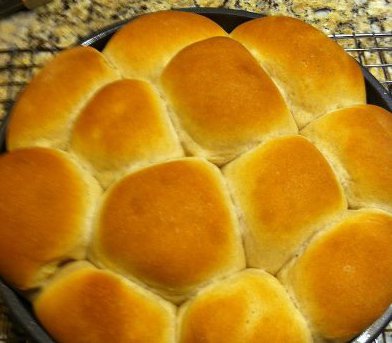 It is the way of life that less than 24 hours after I wrote a post wondering if Pinerest wasn’t getting just a little bit evil — and even before I actually typed up said post — I would find myself turning to Pinterest for something, making it immediately and feeling really good about the process.

You see, my husband made this roast chicken, in advance because who has time to roast a chicken and eat it the same night during the week? (Yes, I work from home. I’d also be a vegetarian if I had to touch raw meat regularly.) So we had a lovely meal planned: chicken, stuffing, potatoes and gravy. Of course that’s not enough carbs. There would have to be bread, too.

I contemplated just hitting a bakery, but I do like to bake and hadn’t made anything more than muffins in a long time. (Side note, speaking of muffins, I made those banana muffins again and this time I got 7 instead of 10. So clearly the size of the bananas matters.) So I wanted to make bread. No, I really wanted to make rolls, I decided while driving home from preschool dropoff.

The only roll recipe I’ve made in recent memory (and it’s not that recent, frankly) is for yeasty potato rolls, which are delicious, but kind of a pain, and I didn’t have any extra potatoes.

What I needed was someone else’s go-to recipe for yeast rolls; if they were easy and quick as yeasty things go, so much the better. I know just where to go to find such a thing: Pinterest.

I should mention that I do not lack for other sources of yeast roll recipes. I own two King Arthur Flour cookbooks, plus a couple of other bread books, not to mention Better Homes and Gardens, Fanny Farmer and the like. But I knoew Pinterest would be faster.

So I typed in “yeast rolls” in the little search box and found plenty. I first pinned one from Leite’s Culinaria because it’s a site I used to visit. I even got his newsletter for a while. (It’s possible I still do and it’s filtering into that “newsletters to read” folder I haven’t looked at in more than a year.) But that one had eggs, and I didn’t really want to use eggs.

Then I clicked on this recipe from Country Mama Cooks. I liked it because it said “easy” and because I’m such a sucker for those photo logo blog label things. Also, no eggs, so score.

And it really was easy. There are just six ingredients (seven in my version because I subbed half a cup of white flour for wheat). I mixed it completely in my Kitchen Aid, so no kneading, and the dough was perfect when I knocked it down, making beautiful little balls of dough with almost no effort on my part. Two one-hour risings and 15 minutes in the oven give you some really yummy rolls. You’ll wonder why you ever buy them from the store (probably because you don’t work from home so you can’t babysit dough for two hours in the middle of the week).

Anyway, Pinterest redeemed itself for one day. A little bit. Why you want to find something fast, it’s a good place to look.