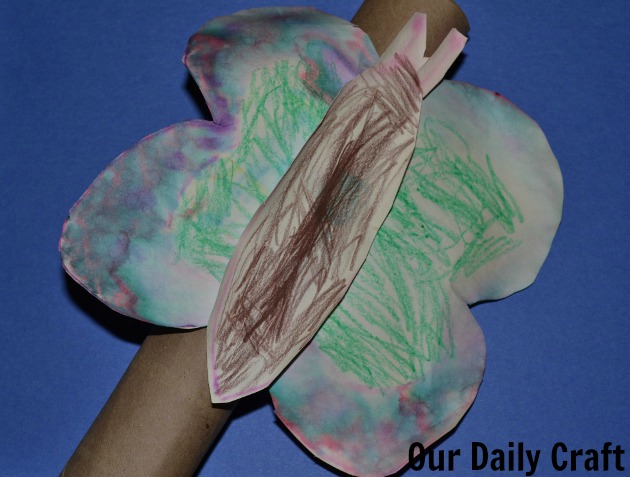 The girl made this butterfly at school. Clearly it was coloring and cutting practice, because each part of the butterfly was supposed to be colored a certain way, then cut out and glued onto the tube.

She loves it. So much, in fact, that she slept with it under her pillow a couple of nights.

The wings are a little bent because of that, so she declared it “ruined” and decided she needed to make a new one.

This was before school one day and I didn’t take pictures while she was working on it, but I traced the butterfly shape for her from the old one (I think I ended up cutting out part of it, too, even though she’s capable) and she colored it with crayons and markers and glued it together by herself.

Later, she took it outside to play with it.

And left it outside.

I didn’t know it had been outside until I found it over the weekend and this had happened.

The rain on the markers made a sort of melty watercolor effect that I think it really cool.

You can do this on purpose if you want by drawing with markers or painting with washable paints and leaving your project — butterfly or otherwise — out to get rained on.

She decided this one wasn’t ruined by the rain and so far has continued to play with it. We might have to try this experiment some other time on purpose.

Have you ever had projects get rained on, deliberately or not? I’d love to hear what happened!