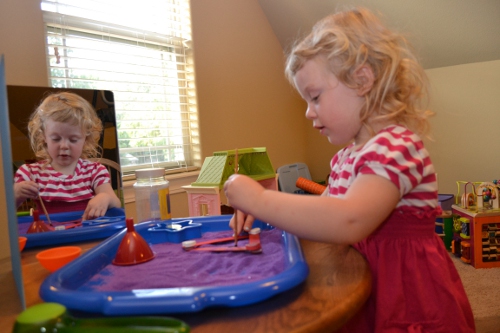 If you read any blogs on playing with kids, entertaining kids, Montessori-inspired learning/play and whatnot, you might have heard of the concept of “invitations.” I think I first heard about them reading Play at Home Mom, which is really the site that sucked me down the rabbit hole of creative play. There are some examples of invitations there and a description of what they are. I think of them as a kickstart for exploration and learning, where you are providing a set of materials and a suggestion about how they might be used (based on what you offer) but you’re letting the child explore in whatever way she or he wants.

I’m a big fan of this idea, but I’d never really made one before. It seems kind of silly to set this stuff up when I’m the only person in the house, and the Bit does a fine job of directing me to what she wants to play with.

But I’ve had this colored play sand sitting around my office for months (since I had a shopping spree at Discount School Supply, another site I love) and I thought I should do something with it.  But I didn’t want it to be, “hey, let’s go play with colored sand!” because that would probably be really messy, so I decided to set it up myself.

This is a tray (also from Discount School Supply) that’s almost cafeteria tray sized. I poured most of the sand onto the tray, leaving a little for her to pour. I taped together a couple of mirrors and put them behind the tray, again for no other reason than I’ve had them for a while and never used them. The rest of the stuff is found items from the playroom and my office: there’s a paintbrush, some shells, a spoon, a little bowl, a star-shaped cookie cutter, a funnel.

After I set it up I actually moved it to a different table in her playroom and put a big plastic tablecloth on the floor to contain spills.

Later that evening she asked to go upstairs and I asked her if she wanted to see something and led her to the table.

Because of the shells she asked if we could find things in the sand, but it wasn’t really deep enough for hiding things. Then she went to the supply table that’s right behind this table and grabbed a couple of tongue depressor shape games that came from our most recent busy bag swap.

She put these into the sand and “painted” them with the brush.

Then she noticed there was sand she could pour, so she did that.

She used the spoon and her hands to get sand (soup) into the bowl, then asked for another bowl so I could have some, too. So sweet.

After that she was pretty well done with the sand, but she wanted to play with the mirrors. She sat down with them, remarked there were “two images” (!), then opened them up on her lap like a storybook. When the story was done, she admired herself for a minute.

It was a slightly rushed playtime, abbreviated by the need for a potty and a bath, but it was really fun to see what she would do with the materials I offered.

Have you ever made an invitation for your child? I’d love to hear what you did and how it went over!

Thanks for visiting, commenting and sharing. This post is linked to It’s Playtime, where you can find lots more cool activities to try with your kids.