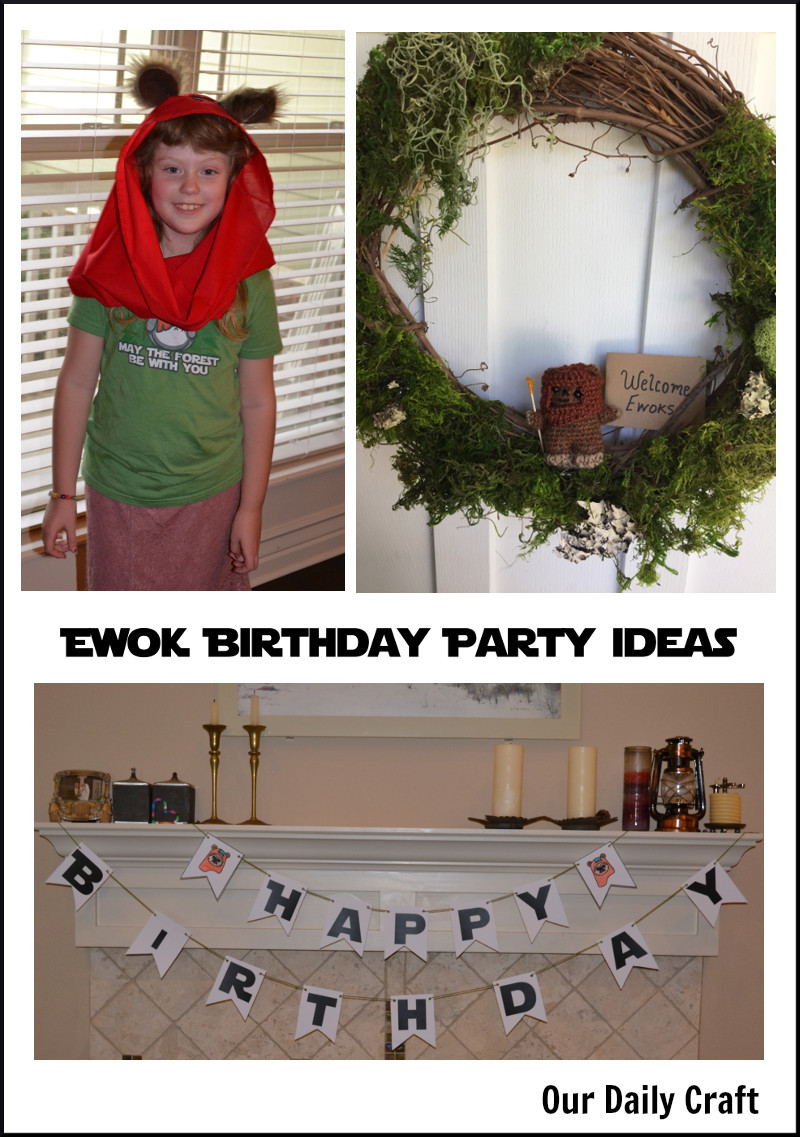 These easy Ewok birthday party ideas will have your party guests partying on Endor in no time.

My daughter said throwing an Ewok birthday party was easier than she thought it would be, and while it was definitely more work for me than it was for her, I have to agree.

When she first told me she wanted her party theme to center on those adorable bear-like creatures from Star Wars, I panicked a little bit.

But I should have known the Internet would provide, and I found a lot of really cute ideas that I hope will help you if you’re planning an Ewok birthday party. 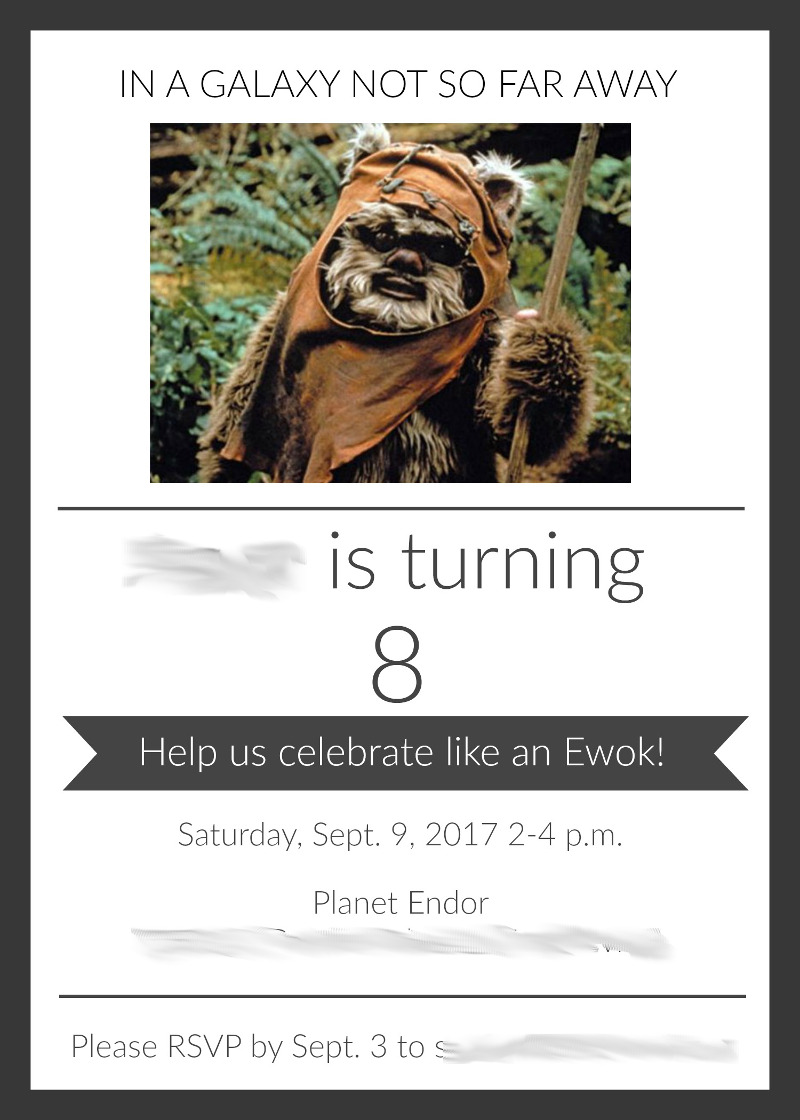 I actually couldn’t find any Ewok invitations, though there are plenty of Star Wars-themed invites out there if you are looking for different characters.

I was inspired by these from MyFirstInviation on etsy and made ours in PicMonkey (Canva would work, too, if you’re trying to do it without paying).

I found a picture of an Ewok on the Internet (don’t tell George Lucas!) to use at the top and used the words “In a Galaxy Not So Far Away” my kid is turning 8. “Help us celebrate like an Ewok!” The party details included a line saying the party was taking place on Planet Endor, which the girl really liked.

Getting the House Ready 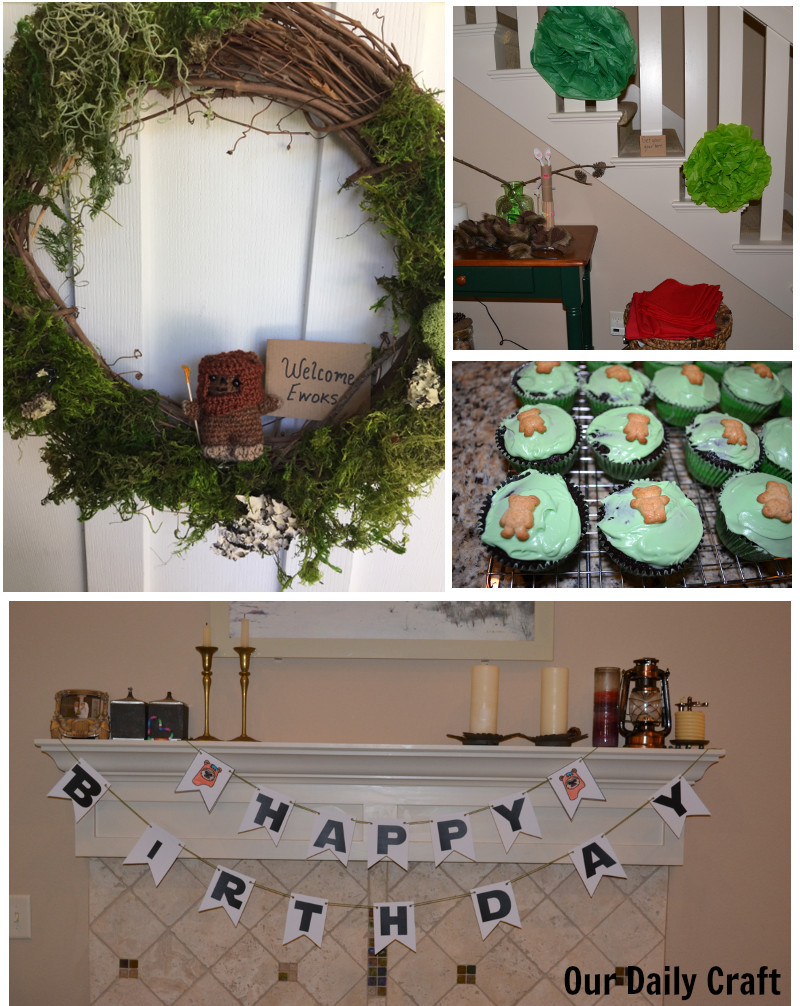 I hoped the party would mostly involve the kids running around in the yard — the girl said our backyard play structure was the perfect Ewok Village — so I didn’t do a lot of decorating.

I have gotten in the habit of decorating the door with a party-themed wreath because it’s a sign for people who haven’t been to our house before that they are in the right place. My Endor-inspired door wreath is super easy to make, and the crocheted Ewok was pretty easy, too, even if you’re not that skilled at crochet.

Inside, I added a couple of tissue-paper pom-poms to act as trees in the area where the kids for their Ewok ears and hoods. There was a little sign that said “Get your gear here.”

In the living room I put up a Happy Birthday sign, which was inspired by the one at Busy Moms Helper, but I downloaded a Star Wars font (it’s called Star Jedi) and made my own banner pieces to match the character cutouts from Merriment Design.

I used an Ewok on each side of Happy, and let the girl color them in. The letters are strung on green yarn and the banners are taped to the mantel. Easy peasy.

In case anyone got lost on the way to the backyard, I added a sign for the Ewok Village, which I placed next to the cupcakes. They’re just homemade (from a box mix) chocolate cupcakes with vanilla frosting spiked with a little green food coloring to make them look like trees. A Teddy Graham in the middle makes them Ewok cupcakes. 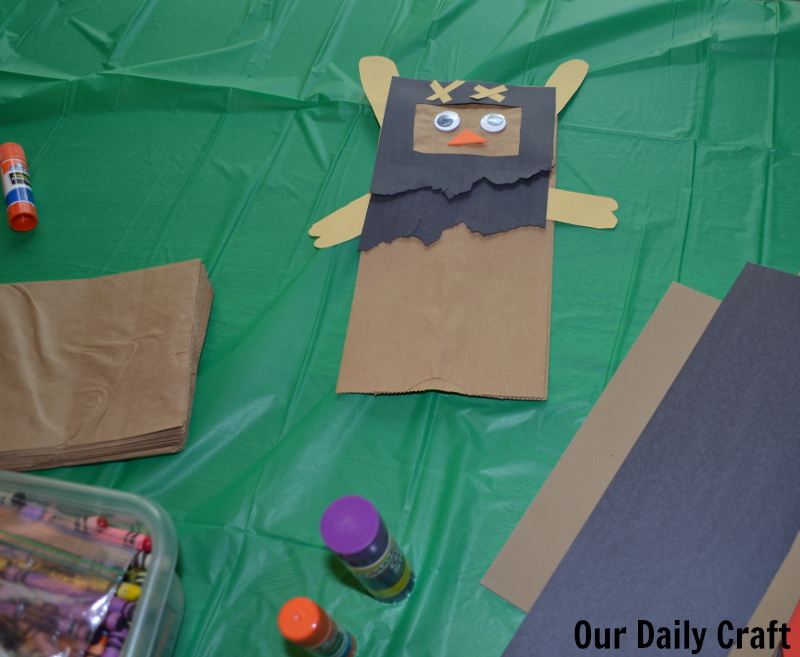 We found a picture from a Maker Faire of an Ewok paper bag puppet, so we used that as our craft. All you need are paper bags, construction paper, googly eyes and glue.

The kids didn’t necessarily make Ewoks, but they did have fun.

There were lots of other ideas I saw but didn’t have time to try, such as:

Any of those would be a great craft for kids to do, too, if you have a birthday person who insists their party have a craft.

All in all, our Ewok birthday party was super cute and the kids had a lot of fun. I have to admit, it was fun coming up with all the projects, too.

Has your kid ever had a kind of strange birthday party request? I’d love to hear about it!