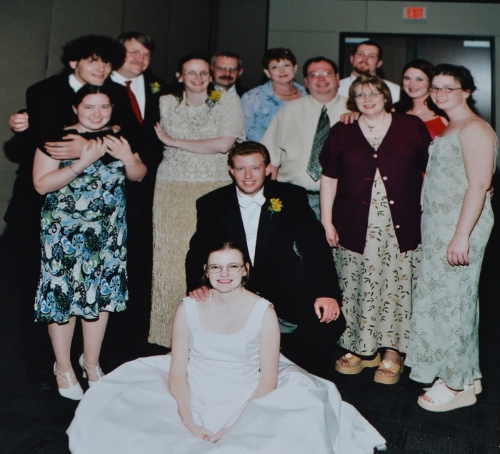 My husband and I have been together a long time. Like, 16 years. We first started dating back in 1996, and we’ve lived together, other than a couple of summers I was away working, for almost 15 years.

But it was 10 years ago today that we said out loud those words that so many people had been nagging us to say for a while. (It was so long ago there were no digital pictures, so forgive the pictures of pictures in this post, which look a little funky.)

We said back then that we’d been married in our hearts for a long time, and I still feel that way. So while it’s kind of hard to believe it’s been 10 years, it also in a way feels longer than 10 years, because we’ve been committed to each other so much longer than that.

My sweetie has seen me through college, those two faraway internships, three day jobs, going freelance, an apartment, a duplex, two houses, two cats and the Bit. (He’s worked the same place almost as long as I’ve been with him.)

I have known him for more of my life than I did not know him. Here’s to many, many more.

The wedding day was, as they are, not without craziness. There was an awful, stained aisle runner one of my bridesmaids had to hide. We had music snafus. I cried way too much.

Then we went to Gloucester — which (along with Rockport) will always have my heart, thanks to its beauty, its crazy, wonderful, hardworking people, that crazy paper I worked for, the people who opened their homes and their hearts to me, making me feel like family still all these years later, and for being the first place I ever saw the Atlantic Ocean, among other things — and drove up the coast to Acadia. That was good.

I said when we were there that we’d go back for our 10th anniversary.

But then we had that little girl who still hasn’t spent a night without us, so that will have to wait. It’s good to celebrate us while we celebrate her, too. And we’ll get back there.

I’m also happy to say that we’re still friends with the people who stood beside us that day, and a fair number of those who partied with us.

Anyway, as I’m away from my computer today, hanging out with my sweetie and remembering that day, I hope wherever you are you have love. Always.