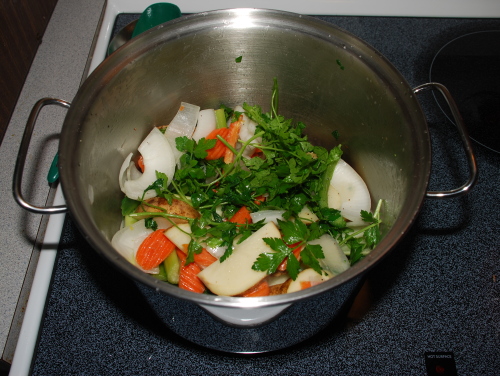 Making vegetable stock (or really any other kind of stock, but vegetable is the only kind I make) is in a way an act of creativity. It’s a way of using things that would otherwise be considered trash or that might go to waste if you didn’t throw them in the pot with some water.

Such was the case with the stock I made this morning. I’d cut up a bunch of veggies to use as dippers for New Year’s Eve, but we didn’t use them, so I’ve been working my way through them ever since. I used some in a stir fry last week, a bunch went into the stock, a little into my lunch. Now there’s not a lot remaining, which is certainly a good thing.

You don’t really need a recipe for stock for that very reason — you can use just about anything and it turns out well (one exception to that I’ve read about is using broccoli or other cruciferous veg; I don’t really know why but I’ve always followed that). But here’s what I did, in case you need a starting point.

Take a big pasta or stock pot and put it on medium-high heat. If you don’t have pre-chopped vegetables, or have a mix, prepare what you need. I used:

Once your pot is about hot, add in enough light olive or vegetable oil to coat the bottom of the pan lightly. Dump in the vegetables, all at once or in stages. Stir every couple of minutes for about 10 minutes, adding the parsley and other spices about halfway in.

After about 10 minutes or when the onion pieces are starting to look a little translucent, add your water. Bring to a boil and lower to a simmer or low boil for about an hour. Allow to cool a bit before straining.

I’ve already used a bit of this in my lunch: dried mushroom couscous from a box with a little more of the bell pepper chopped up in it and a can of chickpeas. Yummy!