Hello, all, and major apologies for the lack in writing for the past week or so. I have a really, really good excuse, though. My electricity was out from last Tuesday evening through Friday evening. We had a really nice ice storm (perhaps you heard about it) and it knocked down a ton of trees, power lines, even utility poles, leaving a big old mess in its wake.

We’re among the somewhat lucky ones in that we have power now. Some of the folks in outlying areas aren’t expected to get theirs back for up to three weeks.

I’ve thought about what I wanted to say in this blog post for a long time (you don’t have much to do but think when there’s no power) but now that I’m writing it I’m not sure what to say. It wasn’t fun, but it wasn’t really that bad.

Actually, come to think of it, parts were kind of fun.

It all started with some freezing rain on Monday that got more severe through the night. On Monday we were kind of making fun of the weatherman for saying that if we got more than an inch of ice it would be devastating. An inch doesn’t sound like a lot, after all. But he was right.

I work from home anyway and my husband worked from home on Tuesday because the roads were already somewhat bad. Our cable (and Internet) went out first, while the precipitation was still mostly rain. But before long it got cold, the ice started building, and the limbs started cracking like crazy.

We have some friends who live up the street and they lost their power a couple of hours before we lost ours (it’s the same line but two different power companies). So we invited them down when we still had power (we also have a gas-powered fireplace, so heat was never a problem). Another friend who’d lost power also came over and slept on our couch for the duration.

Our power went out for the first time at 3, came back after about an hour, then went away again maybe half an hour later. It was enough time for my husband to plan a cooked dinner, boiled shrimp and cornbread. The bread was just going into the oven when the power went off again.

Ever industrious is my man, so he set up a rig with some bricks in the fireplace to heat a cast-iron skillet and cook the shrimp. We had a little salad, some cheese and crackers, a bit of chocolate. We sat around and talked, then played a board game by candlelight. That part was pretty OK.

A restless night was spent sleeping on the couches, then a day full of reading and napping happened. Enough commercial stuff had power back on Wednesday that we went out to dinner, which was way better than the lunch of peanut butter, crackers, cheese and nuts we had (we used outside as a refrigerator since it was below freezing at this point).

The next two days both my husband and our house guest went to work, leaving me alone with the kitties, my knitting, more reading and writing. The first day I didn’t get a lot accomplished, though I did write an essay about the trees, a poem about wishing the lights would come on, and a little journaling.

Friday we got some guys to do the initial cleanup of our yard (there’s still more precision work needed but we’re out of immediate danger of more stuff falling) and I did a lot more writing, some knitting for yarn reviews and a bit more reading.

I was so sick of being inside that by midafternoon I decided to go clean up the driveway (part of our oak tree had been covering half the driveway) and sidewalk a bit now that I could get to them. It was good timing, because a guy drove by in a truck and drove back by minutes later, stopped and said “there are electricity trucks at the end of the road, they won’t let me drive through.”

I commented that turning around was a small price to pay for potentially getting our power back. He agreed. When my sweetie came home he reported that in fact there were four trucks from Mississippi working on our power. Our friends up the street got theirs back maybe around 6, we went to another friend’s for dinner and TV watching and by the time we got back a little after 10 ours was back on, too.

We had a bit of a frenzy of freezer packing, laundry washing and just sitting around in electric light before bed. All is pretty much back to normal now, except for our poor trees, which will never be the same. 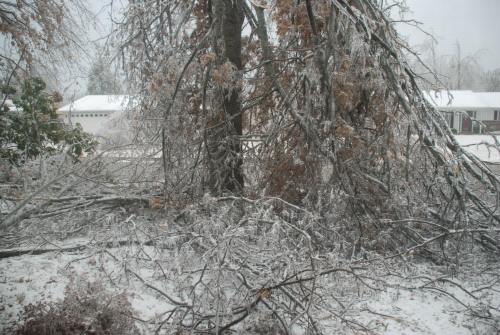