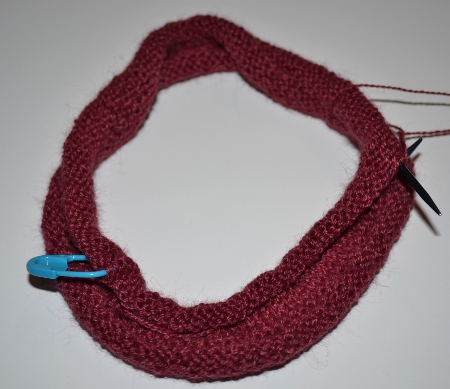 I had been doing well with some of my New Year’s resolutions, especially working out every day during the week and taking some extra time each day for cleaning and organizing chores that don’t always get done.

Last week it all went to hell.

In the span of a couple day the week before I learned of or was reminded of two different knitting publications that had submission deadlines at the end of the month.

So I decided, with days to spare, that I wanted to knit something up. For both of them. Maybe more than one something.

For the non-knitters in the group this might not mean anything, but one of the publications is all about knitting with lace weight yarn. (If you’re not a knitter, picture lace. Tiny, thin yarn. Takes a long time to knit. And not very comfortable. Tiny needles. Etc.)

Now, both of these publications are sure to be awesome. And I’d love to be a part of them. So I dropped everything I could drop, including exercise and cleaning (sorry, sweetie!) to knit. And knit. And knit.

Only I still didn’t get nearly as much knitting done as I imagined I could. In fact, I only got one project basically finished

and one project basically started

and by the end of the week I was tired, bored, and didn’t really care about finishing anything.

I really still like the projects. I think they’re really cute. I have another home in mind for the lace-weight project when I get around to finishing it (here’s a teeny prototype; isn’t it adorable?)

I haven’t decided if I want to send the other one where I was planning or just put it on my site. I think I may be done with the idea and not really interested in knitting it up again for publication.

This lesson, about not being able to do it all, is not just about knitting. Don’t get me wrong, it’s a great lesson for knitters, and for me as a knitter. We’ll never get to knit everything we imagine we want to; I’ll never design all the cool stuff that’s in my head.

But that reminds me to focus on the really cool stuff, to knit only things that I really want to do, people clamoring for holiday-themed knits be damned (at least most of the time).

It also reminds me — and it should remind you, too — that we really can’t do it all. Those endless to do lists really will never end. There’s always something else on the agenda or in the back of the mind that just will never get attended to.

And that’s OK, I think. At least I’m trying to make it OK because it’s a fact of life that I, at least, have been unable to escape. And believe me, I really tried this past week!