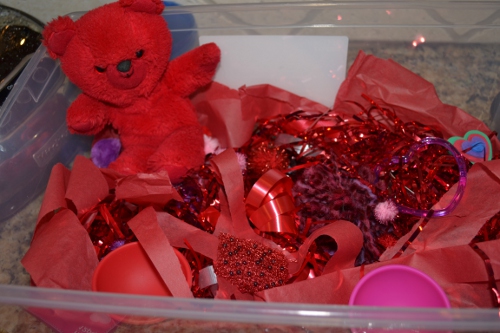 In all my blog trolling lately, I’ve seen a lot of variations on a Valentine’s-themed sensory box. (There are lots of great ones out there, but I particularly like this one from No Time for Flash Cards, if only I had a heart-shaped punch!) So I finally decided to do one for the Bit.

It’s a good mix of stuff we already had and stuff I bought, mostly at dollar stores. The shopping part took a long time, because I didn’t buy everything all in one place (though you probably could), but the putting together didn’t take very long at all.

If you’ve never put together a box like this before, here’s what I did.

All that probably would have been plenty fun, but I also added some stuff I bought just for this purpose:

I also added little pink and red pinch bowls that were part of a set from Hobby Lobby, and a pair of tweezers just for fun.

I started with some of the heavier stuff in the bottom, such as the glass beads, rubber stamp and the erasers. Then I added some of the filler and some of the smaller stuff.

I kept adding and layering, with smaller and lighter stuff at the top. I ended up putting more bag filler on top after I took this picture, which I probably shouldn’t have, because she seemed to think the filler was the toy in the beginning.

The Bit has played with the box a couple of times, but she’s never made it all the way to the bottom. In retrospect I probably put way too much stuff in here, but it was still a lot of fun to put together and I’m sure she’ll keep going back to it.

The first time she played with it she mostly played with the foil filler and the tweezers, trying to put the filler in the little bowls. The second time she got a little deeper, playing with some of the puff balls and stuff (oh, of course the bear came out first and hasn’t made its way back).

After I made the Valentine crayon caddy I stuck it in the box, too, and she pulled it out and was excited to go color (though she hasn’t tried the little notebooks yet; she pulled out some regular paper instead).

I would definitely do this again. I’m already thinking about a St. Patrick’s Day box but I want to try to do it without buying anything. We have lots of green stuff, and I can’t imagine how I’d store little bits and baubles for every holiday anyway!

Have you made holiday-themed sensory or exploration boxes? I’d love to hear what you did.