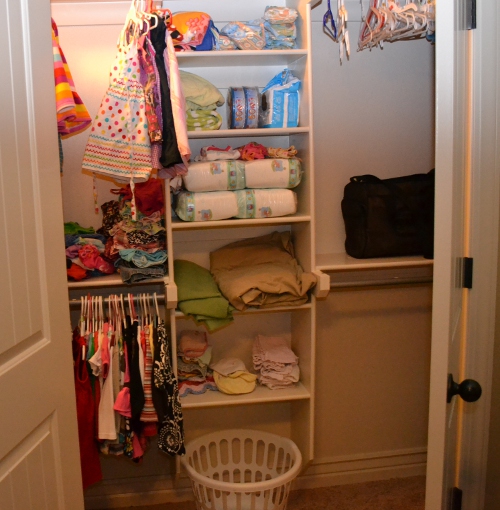 When you have a young child, you can’t really blame them for the state of their room. My girl did not pile random stuff in her closet (for the most part) to make it look like this:

But the Bit’s closet has definitely gotten out of hand. It’s been a dumping ground for anything I didn’t want out in her room. Out-of-season (and often too-small) clothes, my maternity clothes, old equipment, the bumpers I made for her bed, books that are a little too old for her, etc. etc.

So I knew when Simple Mom’s Project Simplify was heading to kids’ rooms, cleaning out the closet was on my must list. I knew it would probably take longer than the playroom declutter because I had clothes and things to go through, and I was right. But it still didn’t take that long, and I’m sure glad to have it done! Here are some tips should you be trying to tackle your own closet — a kid’s or otherwise.

Start at the Top

With a project like this, it’s easy to get overwhelmed or not know where to start. So start at the top. In this closet there’s a high shelf you can’t see in the picture because it’s above where the door hangs, and that’s where I started. That’s where the “older” kid books live, so the first thing I did was put them in a neater pile and gather together all the dust jackets from different books and put them on top of the pile.

After that I started working left to right. There are hanging rods on both sides of the closet, so there was a little back and forth here, but most of her current clothes were on the left side anyway.

I recently started keeping her current clothes on the bottom of the closet so she can choose her shirt or dress for the day and so she can put the clothes back in the closet (after I put them on hangers) when we do laundry.

Since we’re on the cusp of changing seasons, I moved some short-sleeved shirts to the bottom and some of her heavier long-sleeved things, sweaters and coats to the top. I can grab those on cold days when we still need them. Also on the top I put some of her summery dresses that I think will still fit; the ones I think are still too big are on the right top, along with a bunch of empty hangers that will be put to use soon for all the outgrown spring and summer stuff I’ll be selling soon.

There’s nothing on the bottom right, which is kind of awesome.

The shelf on the left-hand side has (out of frame) some extra blankets we throw on the floor or use outside, a stack of bloomers that’s in a holding pattern until I find out which of them I still have matching dresses for and the spring and summer clothes I found that I think will still fit. I’m not ready to put them in her dresser yet because it’s not quite warm enough for shorts.

If you have shelves in your closet, this is a great place to put stuff you need easy access to. I had a good start, with the washcloths and rags on the bottom shelf (again so she can reach them) but the rest was quite the mess. So now, the top shelf has swim diapers and her swimming towel, then there’s a shelf for wipes, changing table covers and Diaper Genie refills, then a shelf for diapers (hopefully both of these will be cleared out soon!), sheets and an extra blanket for the bed. These shelves had been full of crib sheets even though she’s had her big bed a few months.

The worst part of this project was dealing with the clothes on the right-hand shelf and the stuff on the floor. There was a box of diapers, which I found a home for quickly enough, but there were also a couple of boxes of outgrown clothes that I just threw in the boxes without sorting. So that part took time, deciding what was to sell, donate, trash or scavenge for crafty projects.

Also, some of the stuff on that shelf included my maternity clothes, which I had to go through and think about. (I actually pulled a couple of things out to wear again, which sounds awful, but most of my maternity clothes were extra small so they don’t really look like a pregnant person should be wearing them and they don’t make me look pregnant, thank goodness!) I don’t expect to need maternity clothes again (or at least not any time soon) so these went into the sell pile, too.

Now all that’s on the floor in the closet are two boxes of spring sale stuff, a baby hiking backpack that we’re going to sell and a laundry basket. On the right hand shelf is another baby carrier, also to sell, and the diaper bag I’m probably actually going to keep because it looks like regular luggage.

That was a lot of stuff to go through! And it took me probably a little more than an hour over two days. Not too bad. If I had known how little time some of this stuff would actually take, I would have done it sooner. (I’m guessing the next project, which is the pantry, will take exactly as much time as I think it will, which is A LOT.)