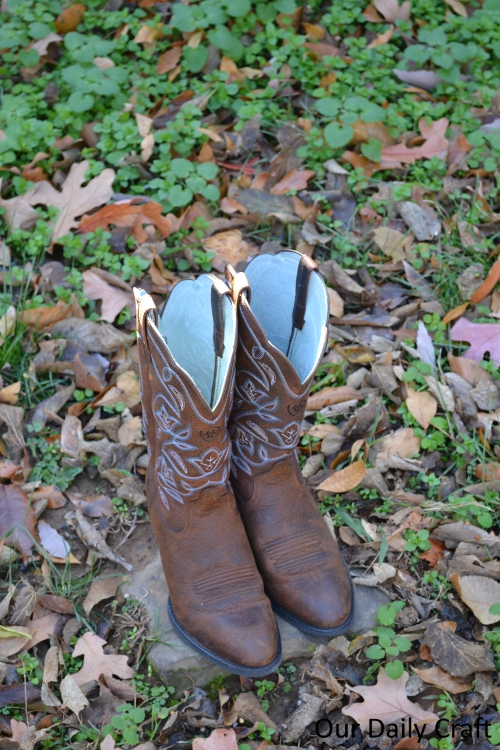 When I was in high school, my parents went through a bit of a phase. They were hanging out with a younger crowd, going out drinking and dancing, and they were listening to country music. My classic rock loving parents were two-steppin’ and Electric Sliding all over the place.

Being a teenager, and a girl who never considered country to be music, I was embarrassed. I took it as a mid-life crisis and ignored it as much as possible. Except for the one Halloween I dressed up as a cowgirl — complete with my mom’s boots, and danced one line dance, to the hoots and hollers of all in attendance — I never wore boots.

Around the same time, I half stole the heart of a country-lovin’ boy at school (I say half stole because, smitten though we both claimed to be, we never actually dated. So goes love in high school.). We wrote each other romantic notes about someday, sharing love songs in writing. He gave me “I Cross My Heart,” by George Straight. I gave him Tom Petty’s “Yer So Bad,” because it was the closest to a country song I knew. He wore boots, but I don’t think I’d have slipped a pair on my feet even for him.

Learning to Love the South

Growing up in Arkansas I always had a chip on my shoulder about living in the south. I hated the stereotypes everyone else in the country seemed to have about us. Backwoods, ignorant, no shoes or plumbing, cousin-marrying (never mind that all my cousins lived up north) hillbillies with no education. Racist, backward, country music loving, cowboy boot wearing yokels. Oh, but you do have a pretty good basketball team (back then anyway), and Bill Clinton did alright.

I hated it when people would make fun of my home. I saw it as making fun of me by extension. It killed me the first night I was in Massachusetts, “on my own” far away from home, a new college graduate, when I went out drinking with my new housemates and the guy at the door of the bar made fun of me for being from Arkansas. (It was because someone had just gotten busted using fake IDs from our fair state, but still.)

I tried my best not to look, sound or act like someone from Arkansas was expected to. My cover was completely blown when, after Peter — general manager of the paper and one of the proprietors of the Watsons’ Home for Wayward Interns — told the girls I didn’t have much of an accent, then I left a long, rambling message on the answering machine in which I knew I was sounding so terribly southern I wished I could erase it before I was even done talking. (I normally don’t have an accent, but it sure can come out when I’m upset, and that message was recorded in the middle of what I affectionately call copy editor boot camp hell.)

Back then I figured I was going to get out; I wanted out of Arkansas, out of the south, away from that past.

Now I know better, of course. Even then I was pretty tied to the state thanks to the guy who’s now my husband. But I’ve learned through the years that it’s OK that other people don’t get Arkansas. They don’t know about the hills, this fall to rival New England, the beautiful people, the food. Even the culture I’ve come to appreciate. I love how so much music has come from Arkansas through the years, from William Grant Still to Johnny Cash and Lucinda Williams. The artists, and the art we now get to show to the world thanks to Crystal Bridges. There’s a lot to love here and I’m glad the whole world doesn’t know about it.

As I’ve accepted my southerness, I even decided it would be OK to own a pair of boots. Of course the ones I wanted were not typical cowboy boots. I longed for harness boots (still do, but Frye’s are so darn expensive!).

But when the fabulous local company Country Outfitter (another thing to love about Arkansas; so many awesome businesses have started here) offered boots to the attendees of the Arkansas Women Bloggers conference back in August, I knew I needed to go with something more traditional. After lots of searching on the site, I went with the Ariat Women’s Heritage Western boot (with a round toe in the Brown Oiled Rowdy color if you must know), which was a really popular choice at the conference because they’re pretty basic but also, well, pretty. They’re a good entry-level boot for people who’ve never had boots before.

In the couple of months that I’ve had the boots, I’ve really enjoyed them. They’ve become my standard date night/going out somewhere fun shoe (though even here there are some occasions that require something a little fancier). They’re comfortable, nice looking and actually pretty fun to wear.

Now that I’m on the boot bandwagon, I could totally see owning some more. Those harness boots are still on my list, but I”m also kind of interested in some slouch boots, too. (Neither of those are in my size, so they’ll have to wait.)

Boots for You, Too!

If you’d like some boots of your own — southern girl or not — now’s your chance to check out the awesomeness that is Country Outfitter. In addition to giving me a pair of boots, they’ve been gracious enough to let me give one of you a pair, too, or, more specifically, a $150 gift card you can spend on anything you want at Country Outfitter. They have boots for men, women and kids, and clothing and accessories, too.

All you have to do is enter your e-mail address at this link, then come back here and leave a comment letting me know you did it. If you feel like chatting, tell me what you like most about wherever you live.

The contest will be open until Dec. 3, at which point a winner will be chosen at random. Good luck!

Disclosure: Country Outfitter, a retailer of Ariat Boots, gave me these Heritage Western Round Toe boots to review. Wasn’t that nice?