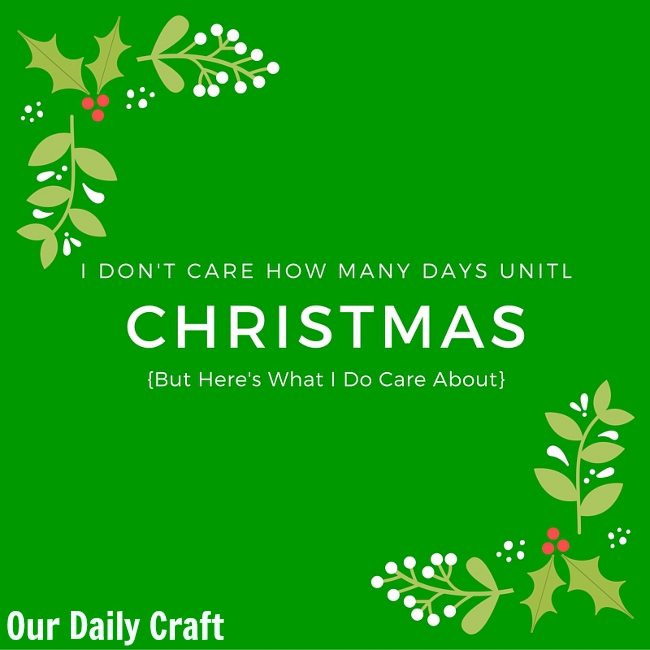 It started before Halloween. Memes were popping up on Facebook saying so many days until Thanksgiving, this many weeks until Christmas, that many days before Black Friday or New Year’s or whatever. I even saw one in early fall talking about how many days it was until summer!

I don’t care how many days until Christmas.

Or Thanksgiving for that matter.

Can’t we just get through today?

Anticipation Sets You Up for Disappointment

I have this theory that the more you look forward to something, the more you plan and start your holiday shopping in October and imagine what the holiday is going to be  like, the more disappointed you will be when the day finally gets here and it doesn’t got exactly the way you planned.

Like women who micromanage their weddings and then fixate on the one wrong thing so they can’t enjoy all the things that go right or all the people who came together to celebrate.

Spreading out the holiday season to cover a quarter of the year just causes more stress. It’s not like you could possibly be unprepared or not get every last thing on your list done, right? You’ve known it was coming all this time. Everything ought to be perfect, right?

And unless you’re one of those people who truly loves all the rushing and planning and making ready, after thinking about the holiday coming up for months you’ll probably just be ready for it to be over by the time it does come. (Of course, waiting for Christmas is a big part of some religious traditions. It’s called Advent. It hasn’t started yet, either. And it has nothing to do with shopping or trees.)

There seems to be an ever-increasing arms race around getting ready faster than everyone else. That’s stressful for the early-doers and for the last-minute finishers alike.

Did you know the origin of the term “Christmas in July” comes from a play that talked about rushing the season as being a bad thing? Now there are practically decorations in stores that early. (Believe me I would shop at Nordstrom if there were one around here and I could afford it.)

I’m not against making the holidays special, but doesn’t starting to look ahead to a thing that’s still six weeks away make the days in between seem less important?

Can’t We Just Get Through Today?

Instead of going crazy six weeks early about a meal that will be eaten in a fraction of the time it took to cook, gifts that will be opened in minutes and played with for a while before being abandoned by Valentine’s Day, let’s think about today.

It’s the regular days that make the real memories. We might remember little bits of holidays past, but more likely it’s the general memory of family around a table or the cousins in matching pajamas with no real memory of which holiday — or which year — that was.

And really I want my kid to remember the regular days more than the holidays.

[Tweet “Does starting the holidays early make the days before seem less important?”]

I want her to remember we were there. The people, not the things.

And we are here now, whatever day it is before Christmas.

And that’s something worth celebrating.

What do you think? Are you an early prepper or a last-minute get-readier? I’d love to hear your thoughts on what the long season does to your appreciation of it!