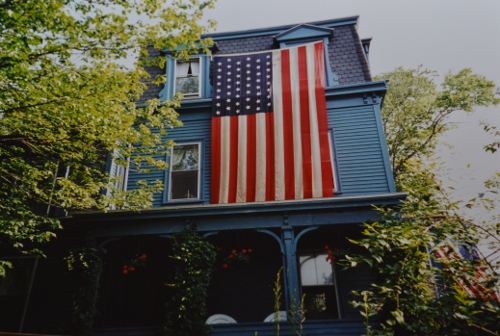 I’ve been trying not to write this post all week.

I started writing it in a notebook on Sunday and stopped partway through. Yesterday, I typed up that bit, added some more, then deleted it.

What gives me the right to write about him? I asked myself. If you think about it, we only were really part of each other’s lives for 12 weeks, 12 years ago. That’s a pretty small thing.

But then again, it isn’t.

It’s not a small thing to open your home to strangers from around the country, to think of them as part of the family, to have them join in family dinners, trips to the quarry for swimming, backyard parties, trips to the beach, movie nights and long after-dinner conversations over bottles of wine.

It’s not a small thing to be such a kind and generous person with such a loving spirit and big personality that you are remembered fondly years later, not just by me but by hundreds of reporters who worked their way through the Gloucester Daily Times and other papers of the Essex County Newspaper chain, either as full-fledged reporters or as interns like I did.

It’s not a small thing that when I heard of his passing, my mind and my heart went back to that long ago time and those long ago moments and felt that loss as big as if much less time had passed.

And that’s worth remembering.

The Watsons’ Home for Wayward Interns

I mentioned Peter Watson in my Country Outfitter post the other day, as half of the duo of Pat and Peter, who opened their home to countless GDT interns through the years.

When I first arrived at the Watsons’ — a place Peter described as “the bluest house you’ve ever seen” — Pat and Peter weren’t actually home. They were in New Hampshire, where Peter was competing in the Mount Washington Road Race. I didn’t know it at the time, but Mt. Washington is the tallest mountain in the northeast, rising 6,288 feet (the road itself is considered one of America’s first manmade tourist attractions, having been opened in 1861). The elevation gain is 4,727 feet over 7.6 miles, and the last 100 yards have a 22 percent grade.

This is tough stuff. Never mind that Peter was 61 at the time, or that I couldn’t have run from their house to Back Beach (which is not far at all), and probably still couldn’t now. Or that he was still running up that mountain 18 months ago.

Peter loved running, and he loved a challenge. He’d go running in the hills around the house and come home with a shirt full of blueberries to be baked into a pie (with cheddar cheese on the side) or made into a bounty of pancakes to be enjoyed on Sunday morning with the Globe and the Times. Which was exactly as excellent as it sounds.

He was also passionate about sailing and playing basketball and football. And just playing. The water balloon fights were legendary. So much so that they’re mentioned in the story about his passing. If water balloons end up in your obituary, I’d say you’ve done what you were supposed to do as a human being.

Peter was also a great dad. It happened that his son Seth was home for much of the summer I was there, and it was nice for me, still pretty fresh from my parents’ home, to see the interaction between a parent and child where both were adults and equals who clearly loved and respected each other a lot.

There are so many memories and I could go on and on, but what I really want to say is that you never know what kind of an impact you’re having on people. Even if you spend a very short time in someone’s life, it can make a big difference. The generosity and openness that Pat, Peter and Seth showed me (and my fellow intern Amanda, and all the others through the years) is still with me and I have no doubt its made me a better person. And I thought you all should know.