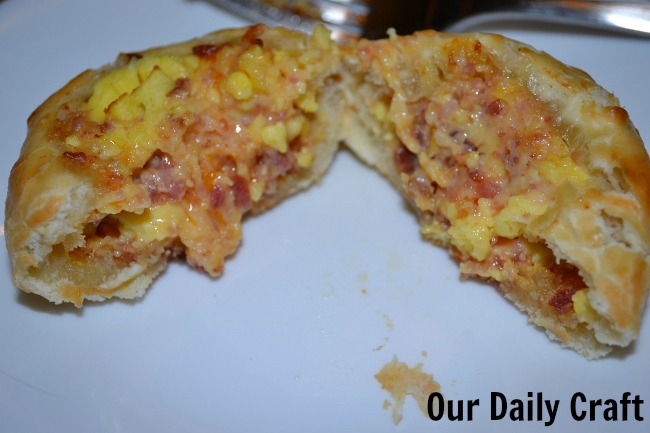 I am a member of the Collective Bias®  Social Fabric® Community.  This shop has been compensated as part of a social shopper insights study for Collective Bias and their client. Also I should mention husband works for Tyson, but that played no part in me getting selected for this study and didn’t change my opinion of the product.

I think it’s a universal truth that mornings are hard for families with kids probably of any age, and quick and easy meals are a must. Often no one is particularly excited to be awake (or is that just me?), we’re in a hurry to get to work and school, or to play outside before school, as is often the case with the Bit.

I made a special trip to Walmart in Springdale to grab a couple of boxes of these meals. They come in bacon, egg and cheese and sausage, egg and cheese varieties. They’re really cute little nuggets of bread and filling.

I saved these for a Monday morning, because Mondays always seem to need a little extra help, right?

The breakfast bowls are packaged four to a box in two wrappers, but a serving size is just one bowl. 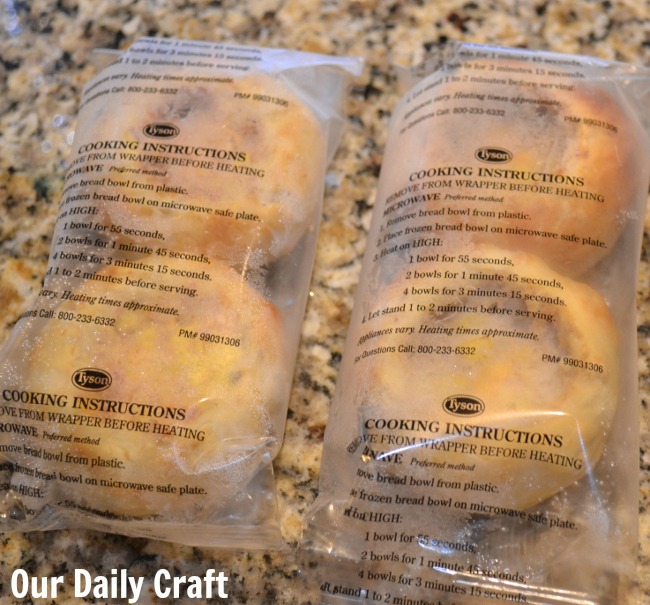 I have to digress for a second and say that annoys the heck out of me, because most people will assume if two are wrapped together that’s a proper serving size. But if you eat two of these you’re getting 12 grams of saturated fat from the sausage one or 10 from the bacon (that’s 60 or 50 percent of what you should get for the day, respectively), plus 26 percent of your day’s sodium and either 39 or 44 percent of your day’s cholesterol, not to mention 460 calories.

If you plan on sticking to one, they do seem kind of small (but they are loaded with meat and cheese) so you might want to add some fruit on the side or something. I just had mine with coffee but gave the Bit juice. 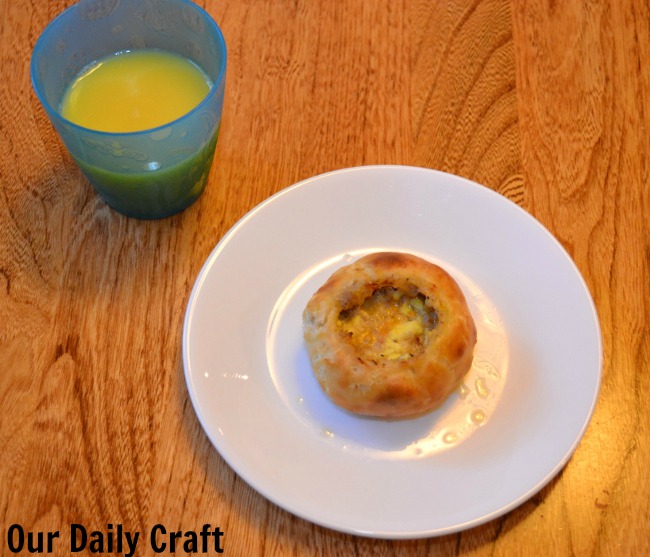 To cook the frozen breakfast sandwiches, pop one on a plate and cook it for 55 seconds. Cook two at a time for a minute and 45 seconds. I did both and they seemed to come out just fine either way.

I was pretty impressed with the way these looked and smelled. Doing frozen bread products right is tricky business, and while I did find it to be a bit chewy on the inside, the outside was pretty and golden and the product looked appealing.

I cut into mine (a bacon one) and found it brimming with meat and cheese. It doesn’t really look like there’s a lot of egg in there.

I found the filling by itself to be really tasty, and the sausage in particular was well-seasoned, but there is the problem of them tasting salty because of all that meat. 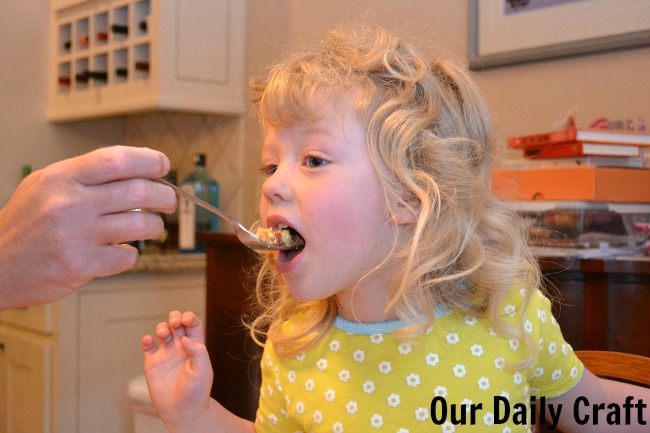 The Bit was skeptical but eventually ate a bite of the filling from each when daddy offered them to her. I asked if it was good and she nodded and said “uh-huh,” which is about as enthusiastic a response as you can expect from a 3-year-old on a Monday morning.

Be sure to follow Tyson on Twitter for news about the company, and check out more pictures of our breakfast bowl morning in my Google + photo album.