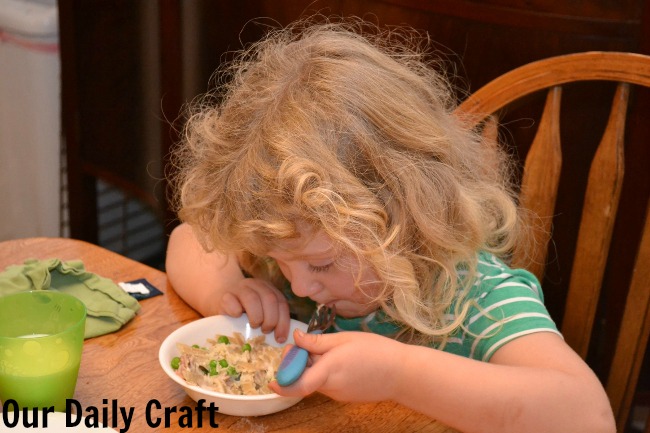 So you know: part of this post is about Craftsy. I’m an affiliate, so if you click links and sign up for classes I’ll get some cash. But I wasn’t paid to write this post. Because, honestly, who would pay for my recipes?

I’ve never been a very good cook. Growing up we ate a lot of processed stuff, and the most impressive thing I learned how to make was lasagna with homemade tomato sauce (though my sauce is a lot better now).

Husband and I somewhat split cooking duties, but he cooks more than I do and he cooks most of the good stuff. I don’t like to touch raw meat, so I’m only willing to cook with ground, or I make vegetarian stuff. Or fish sticks or chicken strips out of the freezer (some days are like that).

I call my style of cooking “toddler food,” because it’s mostly stuff you can make while supervising a toddler or that takes about as long to cook as it takes to watch a kid’s television show. For instance, mac and peas.

I’m Not Winning Any Cooking Contests

It’s really a stretch to call it a recipe. The only hard part — and it’s not — is making the cheese sauce.

What you do is cook some pasta — whatever shape you happen to have, but elbows, rotini and penne are all good (the pictures actually show whole-wheat egg noodles). Throw a cup or so of frozen peas into the water for the last couple of minutes of the cooking time.

Melt the butter in a pan on medium. Add the flour and stir until it’s just a little brown.

Add the milk all at once and stir until it’s nice and bubbly and thickens a little.

Add the cheese and stir until you have a smooth sauce.

If you want to get really fancy (ha!), cut up a couple of pieces of ham, pepperoni or another lunch meat of your choice and heat it in a pan. Or just leave it plain; it will warm up from the heat of the other ingredients. 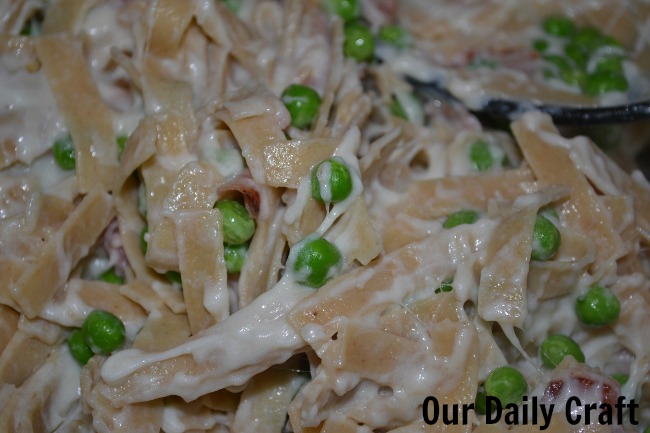 When the pasta is done, drain it well and put it in the pan with the cheese sauce (or do this in a bowl if you used a small pan). Add meat if you’re using it.

This is better than it sounds, and if you happen to have a preschooler in the house they’ll really enjoy it.

I share this recipe not only because I’ve been sitting on it for a long time and I want you to know about the awesomeness that goes on when I’m in the kitchen, but also as a way to let you know that DIY class site Craftsy has some really great cooking classes on sale this month for 25 percent off. You can learn about anything from bread and cheese making to perfecting pie crust and moving beyond cheese sauce into the other mother sauces.

And if you want to try out a class for free, check out the pizza making course (which we don’t need in my house because husband makes awesome pizza).

If you’re already a better cook than me, check out Craftsy’s recipe contest, going on now. Submit your favorite recipe (that you have the rights to) for a chance to be featured on Craftsy.com. Winners will also receive a free Craftsy cooking class. How cool is that?

Are you the cook in your house or do you share that chore with someone else? Do you make “toddler food” or something fancier? I’d love to hear what’s happening in your kitchen!