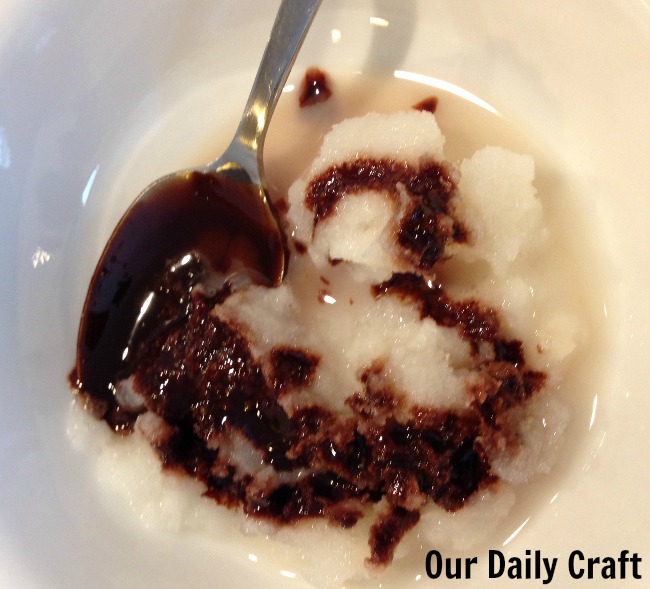 We’ve been iced and snowed in since last Thursday (Arkansas not being well known for its snow removal prowess), and though husband has gone back to work the girl hasn’t been in school, so we’ve been doing what we can to keep ourselves warm and entertained.

I’ve been trying to keep us inside as much as possible (I’m always cold, and have lately been wearing two pairs of socks, even inside), and yesterday we spent a lot of time in the kitchen. And all of that time involved chocolate.

On Sunday I had gathered some fresh snow and tucked it into the freezer to make some snow ice cream. I’d never made, or even eaten, snow ice cream before, but it’s all over the Internet this time of year so it must be good, right?

One thing we’ve run out of over here (even with husband making a run to the store on Sunday) is chocolate syrup, so step one was making some more.

For the ice cream I used about two cups of snow with a little sugar, vanilla and milk. A generous drizzle of syrup and we were ready to go.

The girl said it was “too sweet” (what?) but I thought it was tasty. She ended up eating plain snow instead, which is fine.

While we were working on the ice cream, the girl spied the cocoa on the counter. I found a second container that seemed to be lacking an expiration date, so I suggested we use it to make some chocolate playdough. 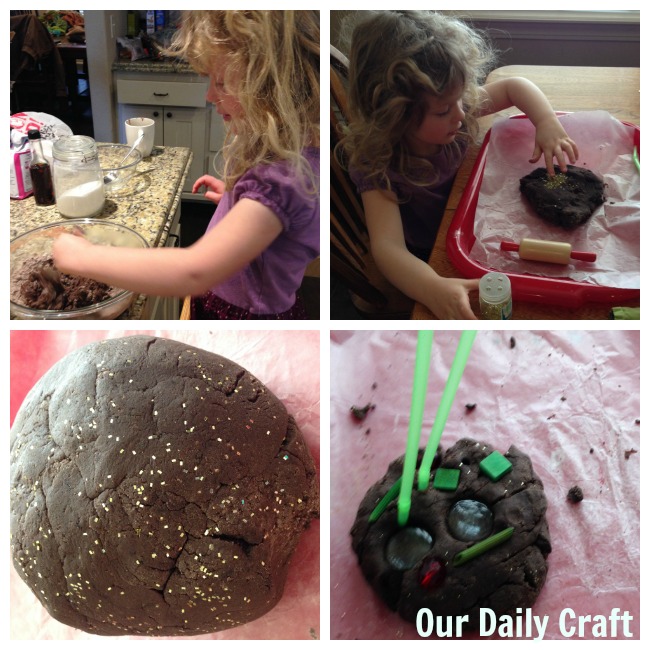 We made a half batch of the usual recipe and added in some cinnamon to make it a little more festive, but I don’t think we added enough because you can’t really smell it over the chocolate.

We made birthday cakes with it, and I gave her some gold glitter to add to it that had been sitting in my office for a long time.

It was fun to make together and we played with it for a decent amount of time.

The other activity I had planned for the day was making banana bread, since we had some perfect bananas. We’ve made banana bread together tons of times, but it’s always fun to work in the kitchen together.

This time she insisted we needed to add chocolate chips to the basic recipe, so we did. They were dark chocolate. It’s super yummy and was a great treat for breakfast this morning.

Our day of chocolate was lovely, and it’s almost going to hit freezing today, so maybe our sequestration will be over soon. I sure hope so, because I’m totally out of recipes.