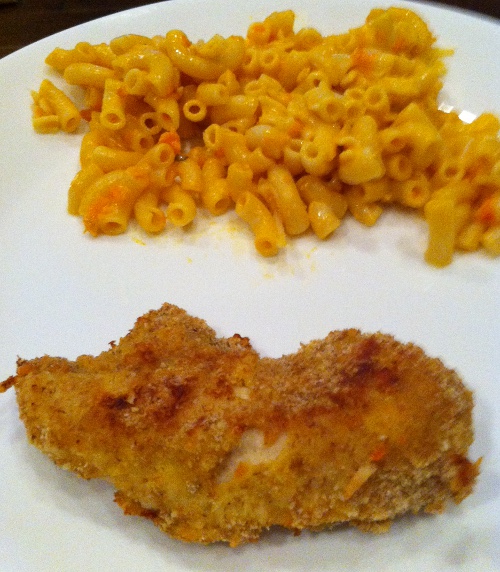 Before I was a mom, I was always really resistant to any efforts to feed kids produce and other healthy foods by hiding them in other foods. I figured there was no way kids who learned to eat this way would ever eat vegetables that weren’t hidden, so, even though you were getting the nutrients into your kids, if they never saw real vegetables they would never learn to eat them outside of mac and cheese and pasta sauce.

Of course, then I had a kid. Who was an awesome eater. For a while. She ate a wide range of vegetables — spinach was even one of her favorites for a while — beans, rice, all sorts of good stuff. And then it seemed like, almost overnight, around the time she hit 18 months, she just stopped. Things she used to love now elicited screams. Avocado was another fave she suddenly didn’t even want on her plate. 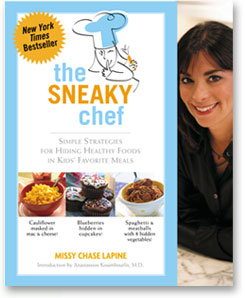 She’s 2.5 now and has gotten a little better on her own. I know she eats more vegetables at daycare than she eats for me (they even get her to eat green beans occasionally, goodness knows how!), and she will eat freeze-dried/dehydrated veggies regularly. She loves potatoes, of course, and still eats a good variety of fruit (though God help you if you try to give her a grape).

Still, I feel like both she and us could do better in the veg department, and I could do without battles surrounding healthy eating at least part of the time, so I bought some books about hiding the healthy stuff. And fell in love with The Sneaky Chef.

Also known as Missy Chase Lapine, the Sneaky Chef is a mom who’s faced all the picky eating problems most of us have. She tried everything, from getting her kids to cook with her to (at least attempting to) putting her foot down and insisting that everyone in the family eat the same thing. So one day when using the tried-and-true method of getting kids to take medicine by hiding it in chocolate, she realized she could hide healthy foods in things her kids would willingly eat to get some more nutrients into them.

The book isn’t just about purees, as you might be thinking. It’s really a whole system of ways to be smarter about the ways we prepare food for our kids, what we buy and how we present it. There are actually 13 different methods presented for getting healthier foods into our kids, from pureeing to combining refined and unrefined foods, avoiding frying, using nutritious liquids instead of water when cooking and identifying foods kids are likely to enjoy without alteration so they still get exposure to “real” stuff (unfortunately for me, grapes are on this list).

There are recipes for 13 different sneaky make-aheads, including different purees, juices, flour and breadcrumb blends, etc. If you can plan your menu around purees you already have frozen or that you can make ahead for the week then your food prep won’t take any longer and will be healthier for you and your kids. The recipe section has ideas for breakfast, lunch, dinner, snacks, drinks and treats, as well as ideas for making packaged foods like boxed mac and cheese, Jell-o, store-bought chocolate pudding and purchased applesauce healthier.

My husband was on a business trip last week so I thought I would finally try some of these recipes out on the girl (reasoning that if they were a flop she would never tell). I wanted to start with macaroni and cheese, because that’s something she loves and the cheese provides a great opportunity for hiding orange foods (there’s also an option that uses a white puree of zucchini and cauliflower, which I will be trying, too, but I had sweet potatoes and carrots in the house).

I had the idea I’d make the whole dish from scratch, but I decided she might react better if I just added the good stuff to boxed mac first (she sometimes eats the packaged stuff better than homemade versions of the same thing, alas). So I made some orange puree (the actual recipe calls for a sweet potato and three carrots to be boiled; I used a potato and two carrots and roasted them instead, then pureed with vegetable stock, though this method did not make a perfectly smooth puree).

I added a good dollop, maybe a couple of tablespoons, to a box of sharp cheddar Kraft mac and cheese. (It’s advised to start with small amounts, which are still better than nothing). The mix blended in pretty well, other than some flecks of carrot. If anything it made the mac a little creamier than usual and added a bit of sweetness.

The Bit picked out a couple of the carrot pieces that were a little too obvious, but for the most part she ate it without comment.

The second night I combined the leftover mac and cheese with a recipe for homemade chicken tenders. These used the same orange puree (it was in the egg wash) and were breaded with a mix of bread crumbs and wheat germ. The could be baked (which I did) or pan-cooked in olive oil.

Now, I never touch raw meat, so this was a stretch for me. I thought they came out well, still plenty moist and with no real taste of the veggies. The Bit took one bite, and though she said it was good, she stuck to the macaroni.

The next night I used a bit more of the orange puree in my basic quesadilla recipe (there’s also one in the book, if you don’t have a basic quesadilla recipe). Mine’s a whole wheat tortilla, cheese and ham or turkey (she asked for ham). I just spread a spoon of the puree on one side of the tortilla before putting the cheese on and cooked as normal.

She only noticed one little bit of veg that she refused to eat and otherwise ate it as she normally would. I found it yummy, too.

In all these meals together the Bit might have gotten and extra serving of vegetables. That was an awful lot of effort for just a little gain (at least from my perspective, what with all the work that went into the uneaten chicken). But I could certainly see continuing to add veggies to things she loves like mac and cheese (homemade or not), quesadillas and pasta sauce (which she’s actually not all that keen on, unless it’s on pizza).

I’d also like to try some of the other recipes, especially those that can make special treats a little healthier. There’s a peanut butter cookie that uses the same puree, a brownie with spinach juice and chocolate chip cookies with beans in them, to give you some examples.

Do you sneak veggies and other healthy ingredients into your kids’ meals (or have you in the past)? I’d love to hear your experiences, especially if you ever got busted!

This post is linked to Busy Monday at a Pinch of Joy and Ta-Da Tuesday at Mommy by Day, Crafter by Night.