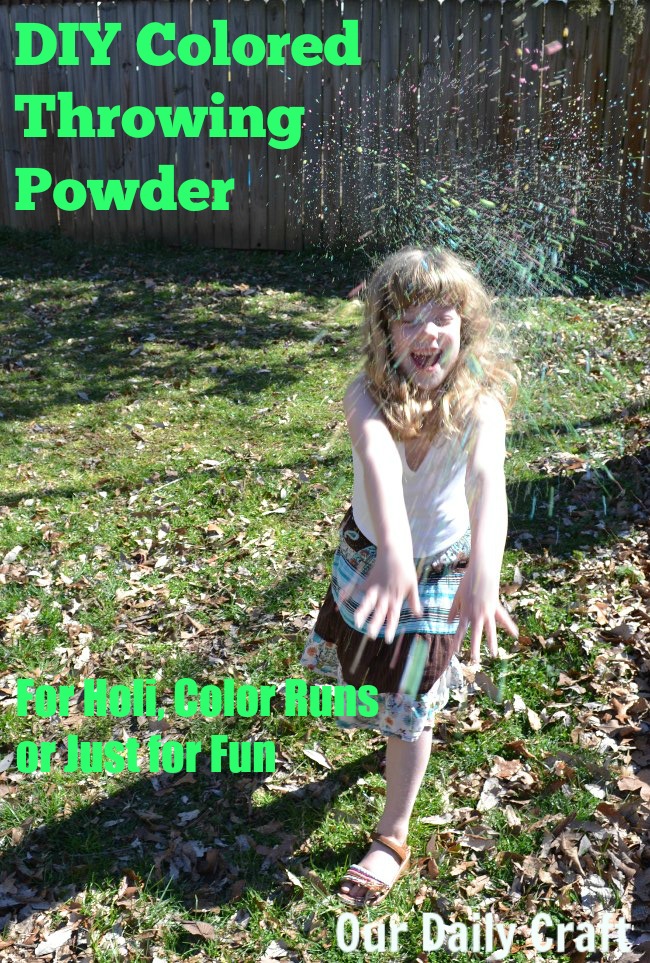 Made with Happy is hosting a series on Kids Crafts from around the World, and I am pleased to share a craft the girl and I tried in celebration of Holi!

Holi is a Hindu holiday that celebrates the beginning of spring. It’s a moving holiday, celebrated on the full moon in March.

The story of Holi says that there was a wicked princess named Holika who had magical powers that kept her safe from fire. She tried to kill her nephew by putting him into a bonfire, but he was not hurt. The gods took away Holika’s power and she died.

Holi is celebrated by the lighting of large bonfires and throwing of colored powder and water on everyone. People usually dress in white clothes and throw powder on everyone, even people they don’t know. It’s no wonder Holi is known as the Festival of Colors.

I decided that since the colored powder — known as gulal — is the most commonly known feature of Holi, it might be fun to try to make some ourselves.

I used the recipe for Homemade Colored Powder at A Beautiful Mess as a starting off point, but I made smaller batches in a shorter amount of time so I fudged a little.

Here’s the recipe I used, for each color:

In a plastic container, measure out corn starch and add water slowly, a tablespoon or two at a time, stirring as you go. You want a consistency that is thick but still will drop off a spoon (like chalk paint, but thicker).

Add food coloring. I used more for the blue and less for the pink. This was gel food coloring I bought at Target. Mix well.

Allow containers to sit undisturbed for 24 hours. By this point the pink was cracked, so clearly dried out well, but the green still had liquid on the top.

I actually microwaved the blue for about 15 seconds on 40 percent power before letting it sit a day, and thre green for a little less time after. This does actually cook the mixture a little bit, but it dries it out fast, too.

Spread the mixture out on a cookie sheet lined with parchment. Try to keep your colors somewhat separate.

Heat the oven to 350, then turn it off. Put the cookie sheet inside, but leave the door cracked.

Let it sit in there until the oven cools.

Then I put some of the powder in little snack bags and crushed it with my fingers to make it as unlumpy as possible. I left it to sit overnight with the bags open before we played with it. 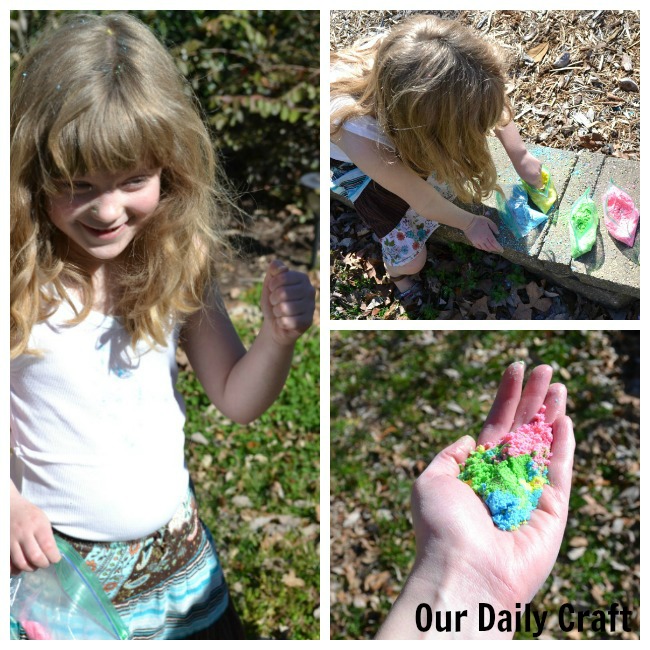 Before we started, I dressed the girl in a new white shirt and myself in some messy clothes.

We read the book Holi by Uma Krishnaswami, which tells a little of the story of Holi and shows pictures of people covered in powder. (It happened to be the only kids’ book about Holi in our local library, but there are lots of cute ones.)

I will say that though this throwing powder was a lot of fun, it didn’t really stick. It might work better if it had dried out more, or it may just be that the homemade stuff doesn’t work as well.

The good news of that, though, is that this isn’t as messy as you would think. What did stick brushed off easily.

She liked throwing it at the sidwalk, too.

It was still a lot of fun to get a little taste of Holi at home.

Be sure to check out the rest of the series at Made with Happy. 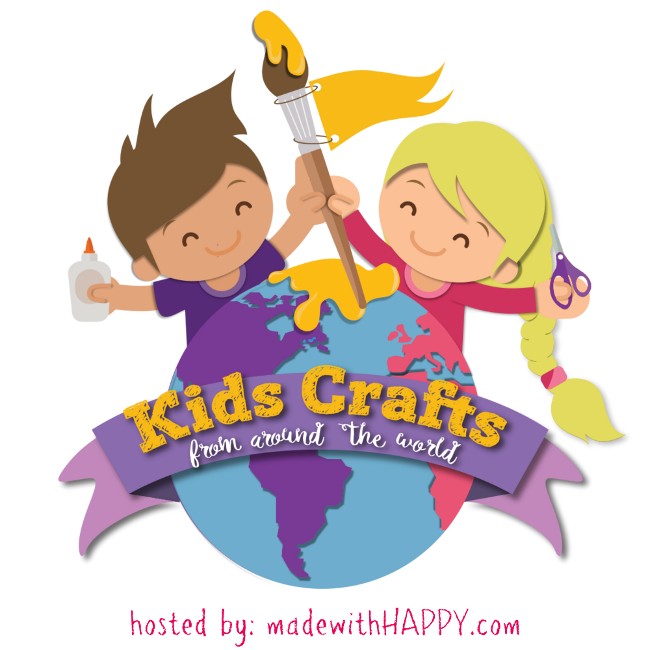 Do you craft for holidays or in the manner of people from around the world? I’d love to hear what you have made.