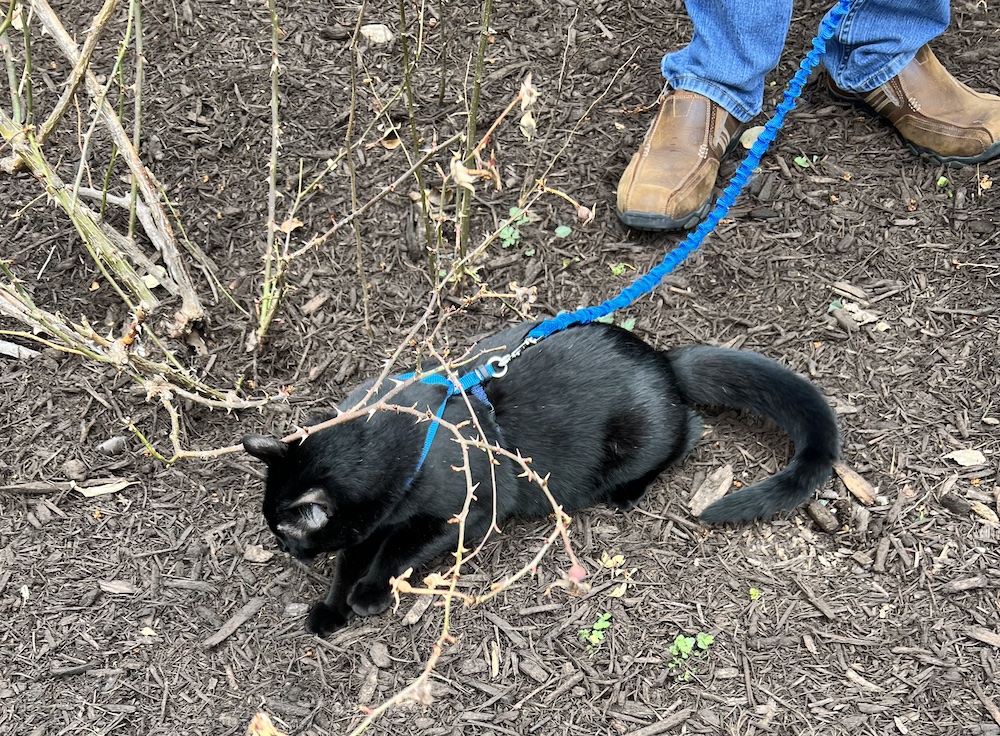 The kittens are a year old now, which I guess doesn’t make them kittens anymore, so we decided it was time to make them indoor outdoor cats. Here’s how to introduce cats to the outdoors safely and some things to think about when you do.

Pros and Cons of Indoor/Outdoor Cats

I know not everyone thinks cats should go outside. Between them being major predators for songbirds and other small animals, there’s also a danger they’ll pick up illnesses or get hit by a car or have something else happen to them outside that they would be protected from if they lived inside.

My parents had indoor only cats starting when I was in high school, and my husband has only ever had indoor outdoor cats. Our last pair of cats started going outside early in their lives and I don’t really even remember how we introduced them to the outdoors. I think we just took them into the backyard and that was that.

We wanted to be a little more mindful of how we started letting these cats out, and so far it’s been good for everyone.

Before You Let Your Cats Outside

Before you start the transition to indoor outdoor cats, make sure they are healthy and current on their shots. Rabies is definitely a thing you don’t want you animals to get, for instance.

There are lots of tick-borne illnesses that cats can get if there are ticks in your area, so you will also want to talk to your vet about tick prevention and have a preventative plan in place before you start letting cats go outside.

If you want to introduce cats to the outdoors by using a harness, you should purchase those as well. We got a couple of bungee leash harnesses, which made the cats and us feel more secure for their first couple of outings.

And if you want to give cats access to a run or just a small enclosed part of your yard, of course you’ll need to get that set up beforehand.

How to Introduce Cats to the Outdoors

It’s important to consider the personality of your pets as you start to let them go outside. We have one cat, Haru, who is generally bolder than the other, Baron.

Haru was quick to go outside and start exploring as soon as we had her harness on and opened the door. Baron took a lot more time, and finally some treats, before he went outside. But after his initial reluctance he’s actually the one who wants to be outside the most.

The first couple of outings with the cats we did with harnesses and leashes. We let them walk wherever they wanted in the yard (we have a pretty good sized fenced yard) for almost as long as they wanted to. (Walking around with a kitten who wants to smell everything is admittedly pretty boring, and at some point we needed lunch.)

After they were comfortable with the harness and leash, we let them go out once with the harness without a leash. We figured if anyone started to show interest in escaping the yard we could clamp on a leash real fast if we needed to, but we didn’t.

Then we would go out with them without a harness or a leash.

After a few days they were allowed out without total supervision, and within a week or so we had transitioned to them being able to go outside when they want, except they come in at night.

Tips for Having Indoor/Outdoor Cats

Once you introduce cats to the outdoors, you’ll need to monitor how they are doing and to some extent where they are going when they are out. So far they have pretty much stayed in our yard (we think Haru may have gotten out once because she didn’t come when we went outside, but Baron hasn’t so far).

They are only able to catch insects at this point, but we’ll keep an eye on their hunting skills and see if they need breakaway collars with bells to impede their hunting.

And though they have flea and tick treatment we will also check them regularly for bugs that might be getting through our defenses in case we need to change prevention methods.

One of the things we would love with having indoor/outdoor cats is not having to have an indoor litter box, but they are still coming inside for that right now. It’s been suggested we could put some litter on the ground outside somewhere out of the way that would show them they can do that outside, but we haven’t tried that yet.

On the whole, introducing the cats to the outdoors has been great for everyone. They are happy with new places to explore and getting to be outside, and it’s taken some of the pressure off of us to entertain and exercise them all the time.

Do you have indoor/outdoor cats? How did you transition to going outside? I’d love to hear about it!