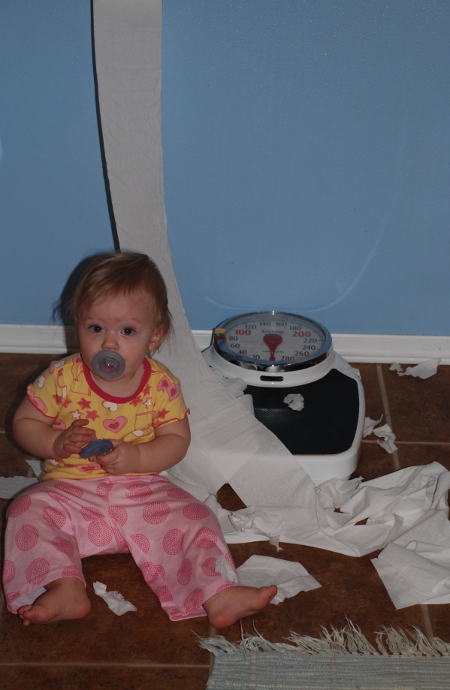 I originally thought this post might be a good entry for Listen to Your Mother, but then I decided there’s no way there’s a moral or heartwarming end to this story. So I share it with you now. You’re welcome.

I am lucky to be a work-at-home mom whose child goes to day care. For about 6 hours a day, I’m alone to do whatever I want or need to do, whether that’s work, catching up on laundry or making dinner in the middle of the afternoon.

But some days I still have to do house stuff when my daughter is home. And so it was one day when my husband went to work out before supper and I was left alone with her to finish getting things ready.

All I had to do was make some pasta. When I got up from the couch to put the noodles in the water, the Bit pulled the knitting needle out of some of the stitches on the baby blanket I was working on. This may not sound dire to someone who isn’t a knitter, but a handful of stitches falling a handful of rows in the middle of a project — a big project due in a few days, no less — is pretty calamitous. Language not becoming of a mother was likely uttered. Thankfully, she did not repeat it.

By the time I saw the damage she was ready to move on to something else.

“I wanna play rice,” she said, meaning a box of colored rice we keep around for playing in like sand and hiding things like rubber duckies in.

My first instinct was it was too close to suppertime to get out something so messy. My second thought was that it might distract her long enough to allow me to fix some of the damage she’d done to my knitting.

I should have stayed with the first thought.

I left her happily — and somewhat messily — playing on the floor in the living room while I tried to undo some of the damage, then left the room again to drain the pasta.

I could hear her coming — the click of uncooked rice hitting a wood floor being somewhat unmistakable — before I saw exactly what was going on, which was that she’d filled a snack-sized Ziploc bag with colored rice and was carrying it to the kitchen, spilling all the way.

I sort of saw what happened next coming, though I had no way to stop it with a pot of boiling pasta in my hands.

By this time I know my language wasn’t suitable for children. More than one F-bomb may have been involved, as well as questioning aloud why daddy felt the need to get into better shape in the first place.

When I grabbed the broom, the Bit wanted to “help” some more. She got the dustpan off the shelf, picked up some of my pile of rice, carried it toward the garbage can, spilling all the way, then dumping most of her haul on the floor in front of the garbage can.

As soon as I heard him coming down the stairs, I said “don’t you want to help your daddy get dressed?” hoping she’d follow him so I could get things cleaned up.

By this time there was rice all over the kitchen floor, dinner was forgotten and my knitting, vulnerable to toddlers and cats, was abandoned on the couch.

My husband thought all this was pretty funny, but he gamely locked the girl in the bedroom while I got two out of three of my crises under control (the knitting took much longer to fix).

I’m sure there’s a lesson in here somewhere about taking time for our kids, giving them the focus and attention they need when they need it. But that laundry that just buzzed is not going to change itself.