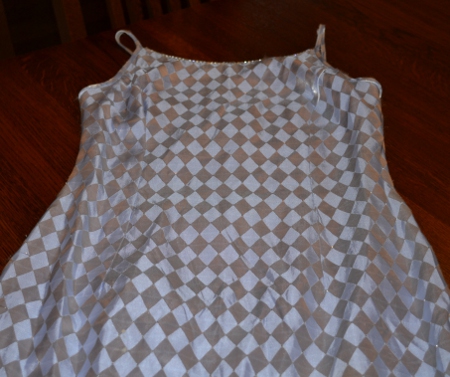 Last year sometime I read an article online, which I did not keep so I can’t give credit to, all about using teen and women’s formal dresses from the thrift store as dress up clothes for little girls.

I thought this was a fabulous idea, and when my MOPS group had a rummage sale I picked up a couple of great ones.

This harlequin-patterned Jessica McClintock dress simply could not be passed up. It’s a little sparkly, with some metallic thread and a row of rhinestones at the neck, and it cost me $1 so I couldn’t go wrong.

Of course a full-length dress is much too much for a toddler, so I decided to cut this down to size.

I tried the dress on my Bit a few times, and it happened that the right length for her was just about the same place where the slit in this dress fell. The slit actually made this a great double-duty project, which we’ll get to in a minute, but even if your dress doesn’t have one you can cut it down.

I actually ended up cutting the dress about six inches longer than the length I needed so I can let that seam out when she’s taller. Might as well get my money’s worth, eh?

I will warn you that it’s a really good idea to pay attention and make sure you’re only cutting through one layer of the dress at a time. If you don’t pay attention and cut through both layers at once, you’ll probably make a big crooked mess like I did. No worries, though, you can straighten it out and then sew your seam and no one will ever know unless you tell them on your blog.

So, next, cut the seam straight, fold over an inch or so at the edge and sew it down. I did this part with my sewing machine.

If you didn’t leave a huge amount of extra length and don’t mind unfinished edges on the inside of your work, you could stop right here. I folded all that extra length up into the dress and hand-stitched the edge to the lining of the dress.

I wasn’t sure — and am still not quite sure — what to do about the straps. This one has spaghetti straps, and I thought it would be really clever to sew little buttons to the lining on the back of the dress that I could loop the straps around to make it fit her better. Well, it was really clever, I’m sure, but it didn’t actually work. Right now we’re just using a tiny clothespin to cinch the straps to the back when she wears it.

So what about the rest of the fabric? I actually mentioned this back at Christmastime when I was working on lots of dress-up stuff (which she’s basically ignored, naturally), but I turned the bottom into a little wrap.

Because this was the bottom of the dress and entirely part of the slit, three of the four edges were already finished. All I had to do to make my wrap was fold the cut edge over twice and sew it down (I used my machine again).

If I wanted to get really fancy I’d also sew the lining down at the bottom edge, but I don’t really care about getting that fancy.

So there you have it: one really easy way to convert a simple formal into a dress for toddler dress up. I have another dress that I’ve been holding back, but I think I’m going to take the bottom (it’s a full, twirly, gauzy aqua number) and turn it into a skirt pretty soon. We’ll see if the Bit actually uses them.