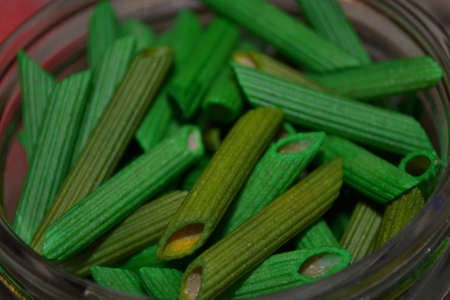 Clearly I watch too much Food Network. Last week I was talking about “here’s what’s happening” and this week I’m stealing episode titles from “Good Eats.” Shameful.

Over the weekend I decided at the last second, hours before going to a friend’s house for dinner, that I was going to make a pasta salad to take. Of course I was not going to the store. I was sure I had everything I needed in the house. I’m the mom of a toddler, I must have tons of pasta, right?

Well, I did, but not anything that would really serve for grownups (though I’m sure the gaggle of toddler girls in attendance would have loved egg noodle pasta salad). My husband stepped in and made hummus, which was yummy and appreciated, and I stepped onto a chair and delved into the pantry.

The pantry is my biggest shame in our new house (well, other than my office, I suppose). I pretty much just threw stuff in there when we moved in and it hasn’t improved over the almost year we’ve lived here. It needs a thorough excavation. I did a quick look through the pasta and rice and such and found lots of things not fit for eating.

They were/are totally fit for crafting/playing with, though, so it’s no great loss.

Here’s what I did.

First, there was a decent amount, probably more than a cup, of expired Texmati rice. I dumped it in a bowl in the usual colored rice method and added some red food coloring and a bit of alcohol. I probably could have used more of both, because some of the grains are still naturally colored, but I kind of like it (and I’ve dumped some plain rice in the Bit’s rice box already anyway).

I haven’t added this to the box yet. I’m not sure if I should just save it until we’ve lost more rice from the box, or if it should be for another purpose. I already put some in an old spice bottle. It only kind of shakes out, but that’s probably enough. We’ll see what happens with this one.

I also found a bit of expired penne, which is the usual favored pasta in my house. I had read that you could color pasta in exactly the same way you can color rice, and it’s true. Look!

I used the exact same method and it worked great. A little more dye or alcohol might have gotten the inside of the pasta a little greener, but I’m not sure and I don’t mind. We’ll probably be stringing these anyway.

There are two colors, I should mention, because I started out with green food coloring, which worked great. I was thinking about Mardi Gras, so I wanted some gold-colored pieces as well, but of course whole grain pasta won’t really dye yellow, so I just threw in a couple drops of blue, too, and got that kind of olive color. I like it.

Speaking of raiding containers from the kitchen, too, this is now stored in a glass jar that formerly had hot chocolate in it. It was a great sacrifice to empty out, I tell you.

OK, this I obviously did not color myself.

I also only hazily remember buying it from the bulk bin at the natural foods store, so while I was purging, this came out, too. It’s actually now living in the container the rice was in. I think this might be a fun texture to play with, and we can do color matching, and I could bury stuff in it, just like the rice. Easy.

I always have the best of intentions when it comes to healthy eating. I buy a lot of dried beans and rice and pasta and things that I have every intention of cooking and then I forget (read: lost in the pantry) until when I rediscover them it’s too late. At least this stuff is mostly cheap.

So it was with this entire unopened bag of lentils. At the Bit’s school they have lentils at the sensory table, so I’ll probably dump these into a container for her to play with, too.

The only trouble with all this great stuff is I have no idea where to put it. The rice and flour we’ve kept downstairs because the playroom has carpet, but there’s not a good accessible place to store it. I like to believe the pasta wouldn’t be too messy, but it’ll be up to me to clean it up, so I’m still not sure what to do with it. We sure need some tot trays!