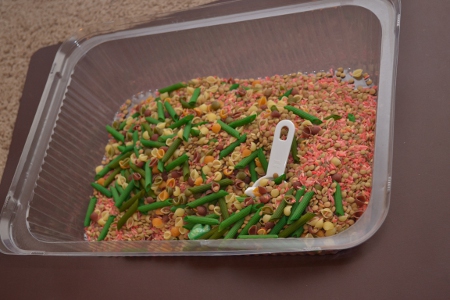 One of the first lessons I learned as a new mom was that if I really wanted to ruin a day I should have an expectation of how that day was going to go.

If I expected to get a decent amount of sleep, I’d be in a rocking chair at 3 in the morning with a baby who wouldn’t settle. If I had plans for things I wanted to get done around the house, there would be untold unplanned messes to deal with.

If I wanted to be somewhere at a certain time — toddler forbid having a schedule that involved several stops or activities — there would be a meltdown in the middle, a demand for lunch when none was available or a spontaneous nap that would end as soon as the car pulled into the garage, never to be restarted.

So I totally know that expecting things to go a certain way is a bad attitude to have. But I’m learning more and more, as the Bit is more and more able to assert her opinions and feelings on the world, that it’s important not to have expectations about how our kids are going to play with or interact with things in their environment, too.

This lesson came back to me loud and clear surrounding her use of the new sensory items I pulled together. I had said that I didn’t exactly know what to do with this stuff, or how to present it to her, but she naturally took care of all that herself.

First, let me say that we play with this on the floor in her playroom. There’s carpet up there! So I try to keep the stuff in the tub as much as possible. The “tub” right now is the cover for a disposable deep-dish lasagna pan — we used the pan but not the lid. It’s on top of a pad that’s meant to be on the top of a desk, like for writing on. I used it under my laptop when I had a laptop. Someday we’ll get a real plastic tub, but we’re making do, and it’s just as much fun in there, if not incredibly sturdy.

Anyway, she started out with a little spice shaker of rice, shaking some rice into the tub. Then she dumped in the rest of the rice, and then the multicolored pasta. The green pasta came after that, though I did try to keep it separate for a while because I wanted it to be available for stringing. We can just pull some out if we need it, no?

The lentils came a couple of days later. I actually have another bag of lentils I unearthed the other day but I haven’t taken it upstairs yet because I don’t have a place to store it right now.

I don’t usually let this stuff stay out when we’re not playing with it, and this is a big make do, too. The containers are all leftover food containers — the left one is a plastic rice container, the middle a glass hot chocolate jar and the right a glass spice jar — and the storage bin is part of a stacking system I bought earlier this year but never quite found a use for. Only problem is it stacks but doesn’t lock, so now it’s in pieces all over the playroom. But that’s to be expected.

I don’t know if this is technically “Montessori,” but if you love stuff like this you can find it and a lot more at Montessori Mondays over at Living Montessori Now. So inspiring!